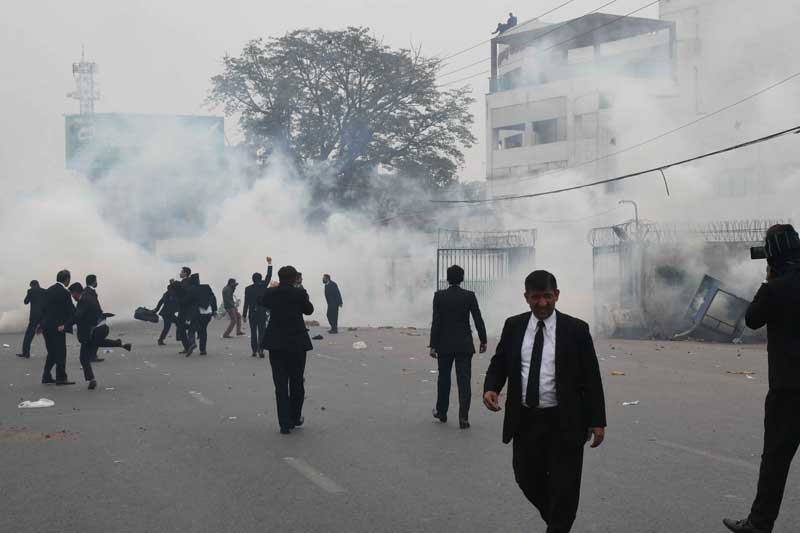 The Lahore High Court (LHC) on Friday slammed an attack by lawyers on the Punjab Institute of Cardiology (PIC), saying the incident reflects as if a ‘culture of jungle’ prevails in the country.

A two-member bench headed by Justice Ali Baqir Najafi heard four petitions seeking release of arrested lawyers involved in attack on the PIC. Advocate Azam Nazir Tarar presented his arguments stating that police has no authority to torture anyone, adding that it is not like they have come to fight a war against India. Justice Ali Baqir Najaf expressed anger and asserted that the defendants surely have come to fight a war. “How dare you attack a hospital?” he added.

Justice Anwarul Haq asked the arrested lawyers to justify their actions. “What if bar council was in place of PIC … what steps should have been taken for them?” he asked.

In response, advocate Tarar stated, “We have condemned the incident on TV programs.” To which the bench asked if Tarar really considers it an ‘incident’. “You have no idea from what we all are suffering after hearing about this act,” he remarked.

Advocate Tarar said they do not have a bar leader who could have explained the incident to the court. He also told the court that licenses of lawyers involved in the incident will be suspended.

Justice Najafi remarked that the bar councils have black sheep in their flock. “The law of the jungle does not civilize a society, and what you have done is a culture of the jungle,” he said, adding that they will give a justifying verdict as they have taken the oath to protect the law.

The court sought a report from Lahore CCPO on the arrest of the lawyers and ordered them to implement the decision regarding medical examination of the accused.

Later, the hearing was adjourned till Dec 16.

There was heavy presence of law enforcement personnel at and near the LHC premises as lawyers gathered to raise slogans against the police and administration. Protesting lawyers also stormed into the courtroom of Justice Syed Mazahir Ali Akbar Naqvi and sought to end judicial proceedings for the day. “It is my responsibility to ensure continuity of judicial proceedings,” Justice Naqvi told the protesters. He said it was up to lawyers to decide whether they appear for their cases but there would be no delay on the court’s part.

Urging the protesters to resolve the matter, the judge advised them to visit the PIC with flower bouquets and ‘hug out’ their differences with the doctors and the administration.

Meanwhile, a lawyers’ body has filed a petition in the LHC seeking answers from the Pakistan Electronic Media Regulatory Authority (PEMRA) over ‘one-sided’ coverage of the matter. The petition also seeks answers from the Pakistan Telecommunication Authority on the viral ‘controversial’ videos showing lawyers attacking the PIC. It also called for an explanation from Punjab Police chief Shoaib Dastagir on the alleged use of excessive force against lawyers.

Police on Friday raided the residence of lawyer and Prime Minister Imran Khan’s nephew Hassaan Niazi. The development comes after law enforcers stepped up efforts to arrest lawyers responsible for the attack on the Punjab Institute of Cardiology.

Hassaan was identified as one of the lawyers behind the PIC attack when footage surfaced on national TV showing him involved in violent activities during the attack on the vital health facility. However, he was not present at his residence at the time of the raid.

On Friday, lawyers across the country boycotted courts and demanded ‘immediate release’ of their arrested colleagues.

Earlier in the day, while addressing a press conference in Lahore, former Supreme Court Bar Association president Hamid Khan condemned the PIC incident, saying it was nothing short of a national tragedy. He said that the lawyers’ purpose was not to hurt anybody, adding, “It is perhaps not right to put all the blame for the incident on the lawyers.” He said the government had left the matter regarding the lawyers and doctors pending for many days. “Because of its neglect, the government [let] the matter escalate,” he said.

Khan alleged that a ‘secret hand’ which wants to ‘ruin the system and deteriorate conditions’ is behind the matter. “Some powers want to destroy the legal community and bring dictatorship in the country,” the SCBA member said, adding that lawyers do not have any animosity with doctors.

Strict security arrangements were made around the IHC in Islamabad where the lawyers went on a strike. The IHC Bar Association also decided to boycott the oath-taking ceremony for new judges. A boycott was also observed by lawyers in Punjab. Rangers were deployed outside the Lahore High Court in light of the lawyers’ protest. In addition to the PBC, the Balochistan Bar Council and Balochistan High Court Bar Association had also given a call for strike, as a result of which lawyers across Balochistan boycotted the courts. In Quetta, lawyers carried black flags and wore black armbands. The Sindh High Court Bar Association, Karachi Bar Association and Malir Bar Association also supported the PBC’s strike call. The KP Bar Council also staged a strike for the fifth consecutive day. In the aftermath of the attack, police has arrested 81 protesters. On Thursday, an anti-terrorism court in Lahore sent over 46 of them on judicial remand while turning down a police request for their physical remand to investigate charges. The Shadman police had lodged two FIRs against 200-250 lawyers which included Section 7 of the Anti-Terrorism Act. The district administration on Friday failed to reopen Punjab Institute of Cardiology (PIC) three days after hundreds of fully-suited lawyers stormed the hospital, which also left at least three people dead. The medical services at all departments of the cardiac hospital remained suspended for the third consecutive day and the hapless heart patients were left to suffer. Around 12,000 heart patients have suffered as the 35 patients couldn’t undergo bypass surgeries, while the angioplasty and angiography of 250 patients was also postponed as doctors and paramedics stayed away from their duties and demanded protection to them at their workplaces. The heart patients couldn’t even undergo diagnostic tests owing to closure of medical services at all departments. On the other hand, the work to restore the building and machines is continuing. The medicine counter at the OPD has been restored and provision of medicines to already admitted patients has started at the Intensive Care Unit (ICU). Meanwhile, the Punjab government has prepared compensation cheques for the victims of the PIC attack. A total of Rs4.6 million will be distributed among 26 victims, including the two deceased. The government has also set aside Rs 2.6 million to compensate people whose vehicles were damaged by the rampaging lawyers.