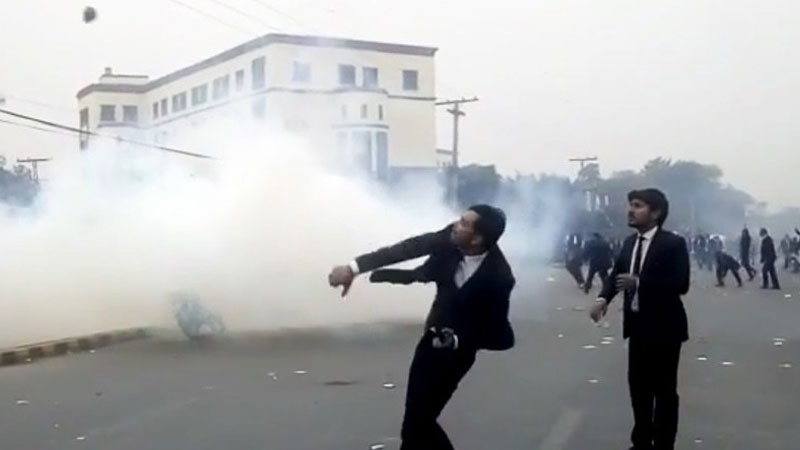 Members of the legal fraternity on Wednesday slammed the protesters who resorted to violence at the Punjab Institute of Cardiology. Senior lawyer and Pakistan People’s Party (PPP) leader Aitzaz Ahsan said such attack by lawyers was not expected and that strict action must be taken against the rioters. He said the violence is ‘shameful and should be condemned’. “No damage was caused during the lawyers’ movement. The incident would not have happened had action been taken in the past,” he said. “The lawyers should have provided protection to Punjab Information Minister Fayazul Hassan Chohan. The matter should have been solved through dialogue. I am feeling ashamed today,” he remarked.

“Many of them (lawyers) will be candidates for the January election coming up. They want to become prominent. These people should not be allowed to even contest the elections. These lawyers are destroying the reputation of all lawyers. My head is bowed with shame,” he said.

“They have attacked a hospital. For black coats to break the glasses and enter wards – this should never happen. Everyone who took part in this should not be voted for,” he maintained.

Some members of the legal fraternity also took to Twitter to express their concern and called for action to be taken against the lawyers for attacking a hospital.

Lawyer Babar Sattar called the violence ‘abhorrent’ and pointed out that ‘it isn’t the first such incident’. He said the bar leaders should call for the cancellation of the licences of the lawyers involved. “Time for us to show allegiance to rule of law and not tribalism,” he tweeted.

Barrister Asad Rahim Khan said hospitals are untouchable ‘even in war’. “Lawyers who support attacking a cardiac centre should be disbarred. And lawyers who partake in the violence – attacking patients, disrupting heart surgery, letting people die – should be in jail. There is no other angle to view this from.”

Taimur Malik, a prominent lawyer, said that the legal fraternity “need(s) to speak up today and condemn the criminal actions of those who targeted PIC”.

Lahore-based lawyer Feisal H Naqvi called the incident “horrible beyond words”. “Attacking a hospital, causing people to die, thrashing a minister […] These are not lawyers. These are thugs.”