United States President Donald Trump has issued stern warnings against “any Russian attempts to interfere” in U.S. elections and urged Moscow to resolve the conflict with Ukraine, referring to the unrest in the country’s east, the White House said in a statement. 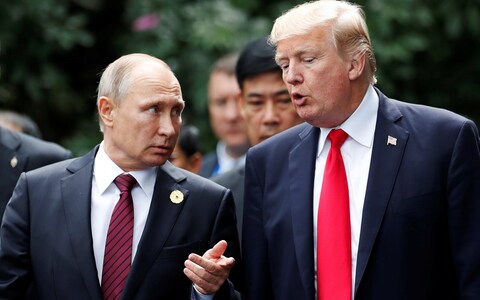 “President Trump welcomed continued engagement with Russia to address areas of mutual concern, including how the United States and Russia can take positive steps with respect to detained citizens,” said the statement.  “The President reiterated the need for fair and reciprocal trade with China. The President noted that a better relationship with Russia would allow increased trade between our countries,” the statement concluded.

Speaking at a news conference with U.S. Secretary of State Mike Pompeo, Russian Foreign Minister Sergei Lavrov said the contacts were with former President Barack Obama’s administration but did not provide details on them. He repeated Russian denials of interference.

U.S. intelligence agencies determined that Russia was behind a sweeping disinformation campaign to influence the 2016 elections in favor of Trump, but Moscow staunchly denied the allegations even as the Trump administration imposed sanctions and indicted Russian companies and individuals in retaliation.