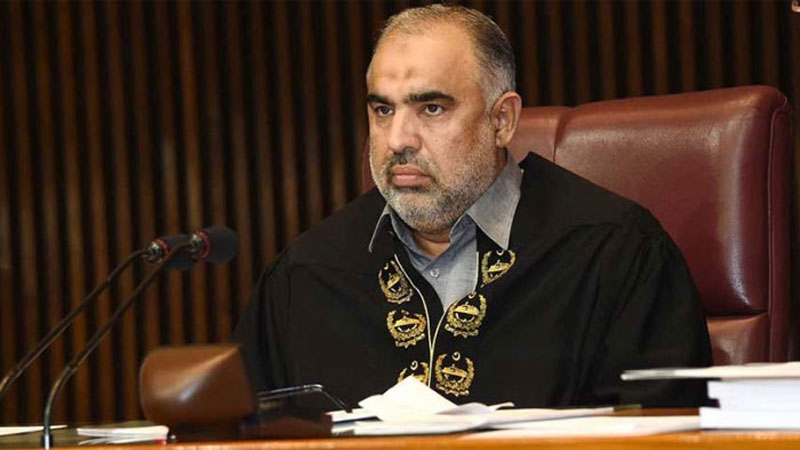 As Speaker Qaiser interrupted, saying he had not received any court verdict and that Abbasi was attending the sitting because of him, the PML-N leader revealed that he had written three letters to the speaker seeking the issuance of production orders of all the jailed opposition members. “I will place your reply in the NA library for record which you had sent through a section officer telling me that only you have the powers to issue production orders,” he said while addressing the speaker. “You have asked me to go to the court. I have great respect for the chair even if you have no respect. I have seen speakers like Fakhar Imam, Mairaj Khalid and Yousuf Raza Gillani who made no compromises on principles and their powers. If you have pressure from somewhere please say it,” he went on to say. “My production order carries the date of December 4 but I have been brought here today (December 10). Do you have the courage to take notice of the non-implementation of your orders?” he told the speaker. “Issue the production order of Rana Sanaullah and I am going back,” Abbasi said and walked out of the House. Federal Minister for Planning and Development Asad Umar defended the speaker and praised him for running the House strictly in accordance with the rules. “If you need any support from the government, we will provide you,” he told Qaiser, accusing the opposition of having ‘double standards’.

PML-N’s Khawaja Saad Rafique said he had been attending the sessions for the past one year on the basis of production orders. “I know there are people in the ruling party like Pervez Khattak and Amir Dogar and even you who have always supported our demand for production orders,” he told the speaker. “We also know those who always oppose the issuance of production orders. We know from where hurdles are created. I don’t want to name the person as it will create more tensions,” he added.

In a remark directed at the treasury benches, he said, “Today we are facing this difficult time and tomorrow you can also face a similar situation. Please issue the production order of Rana Sanaullah.” Later, talking to a private TV channel, Special Assistant to Prime Minister on Information Dr Firdous Ashiq Awan said production orders of Rana Sanaullah to attend the National Assembly session cannot be issued as he is behind the bars in a narcotics case. “There is sold evidence against Rana Sana that he is involved in drugs trade and the same will be proved in the court,” she said. Dr Firdous said the cases against former prime minister Shahid Khaqan Abbasi were not registered by the Pakistan Tehreek-e-Insaf government. The cases were initiated by the National Accountability Bureau (NAB) and he should better provide evidence of his ‘innocence’, if any, to the anti-corruption watchdog instead of blaming the government, she added.

She said both the government and the opposition are responsible to run the parliament smoothly and make legislation for the people’s betterment. “But, the opposition parties are playing the role of a spoiled child and want to run the parliament at their whim irrespective of the fact that the whole world is watching the legislation being carried out by the legislature,” she added.

Separately, the National Assembly on Tuesday passed a resolution tabled by Federal Minister for Human Rights Shireen Mazari on the recent Citizenship Amendment Bill approved by Indian legislature. The resolution condemned the marginalization of Muslims through the passing of such discriminatory acts which are meant to create chaos and anarchy in the region. The House rejected the immoral and unethical bill labeling it a gross violation of human rights.