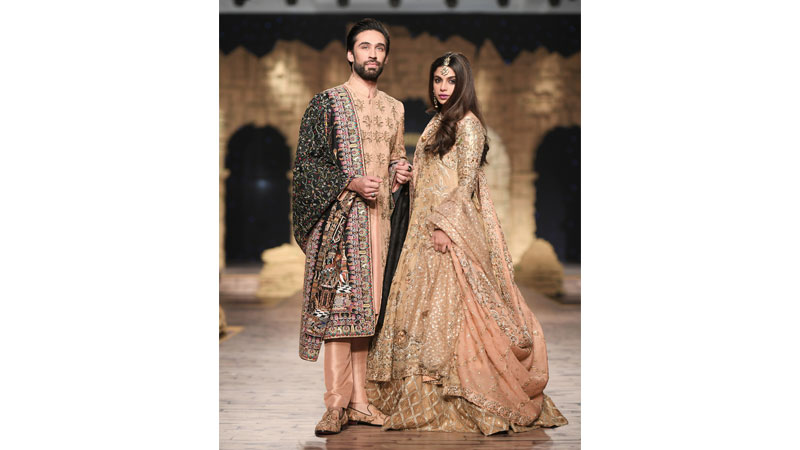 SHAMSHA HASHWANI — the designer’s collection titled Deewan-e-Khaas was refreshing, sparkly and intricate. What struck one the most was the coherency in the colour palette and the very wearable cuts that a bridge could pull off with ease; no drama! The collection was bright, mostly based in hues of cream shades, soft pinks and beige. However, the fittings could have been perfected which was the only negative aspect to the spectacular collection. Actors Ali Rehman Khan and Sonya Hussayn showstopped for the designer. 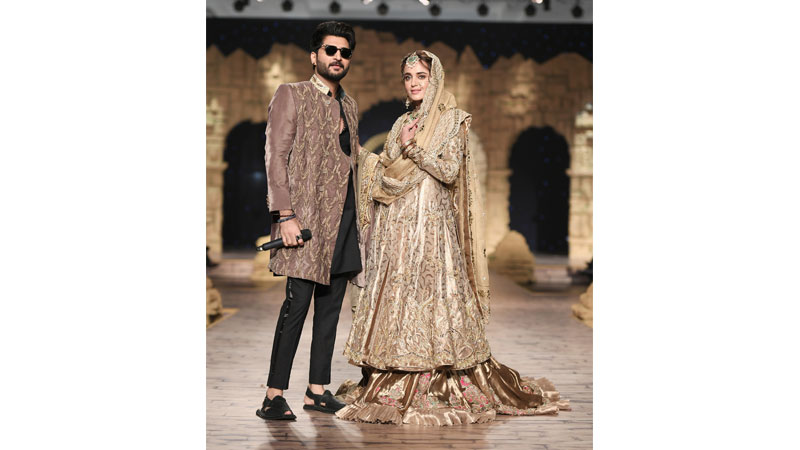 SOUCHAJ — with a collection titled Shadi Mubarik, the band showed us its massive potential in bridal wear, all ready to give its contemporaries a tough battle to win. We especially liked the short red kurtas with intricate embroideries and embellishments, accessories and the voluminous lehngas. However, singer and songwriter Bilal Saeed, who appeared as showstopper wore a front open mauve sherwani that looked a bit too casual paired with day-to-day wear chappals that spoiled the look. Sumbal Iqbal looked beautiful clad in a fold farshi gharara and long shirt, paired with a vintage gold dupatta. 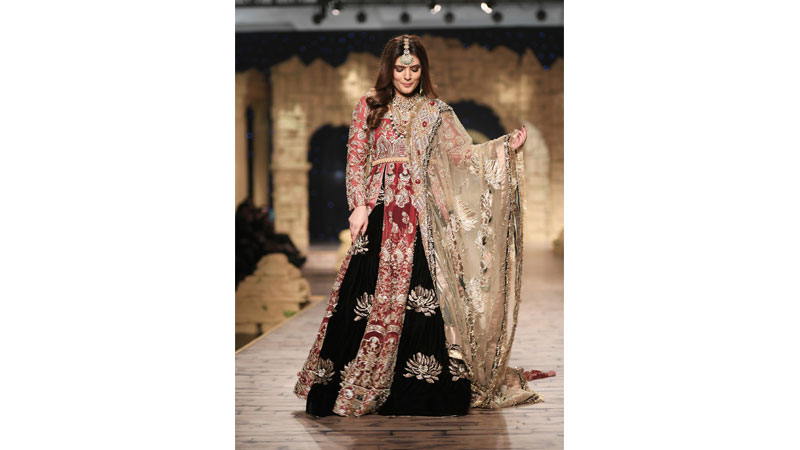 REEMA AHSAN — one expected to see more from the acclaimed designer who put forth a very forgettable collection lacking statement pieces and anything noteworthy. The only noteworthy thing was the red choli worn by showstopper Resham that came down to cringe-worthy slits worn atop maroon velvet lehnga. 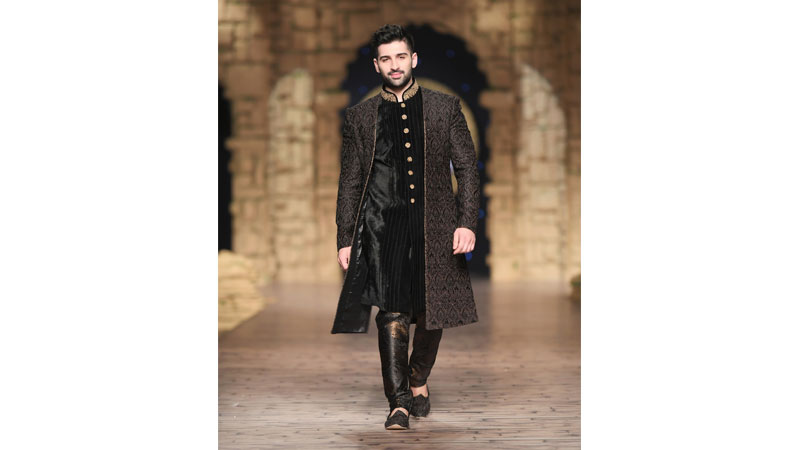 AHSAN’S MENSWEAR — this brand may not be that renowned, but surely brought forth some very beautiful sherwani coats for men. The designers could have gone away with fawn sherwanis, that just don’t look good on grooms, a tip Ahsan’s Menswear could’ve used, but generally speaking, their black sherwani coats and also the ones with tiny maroon embroidery really caught our attention. Chocolate hero Munib Butt showstopped for the designer brand. Also, did we mention the shoes that featured suede moccasins looked really good? 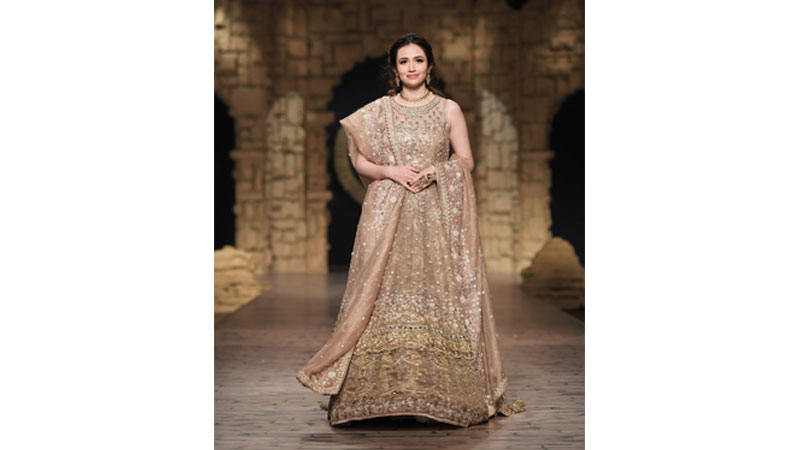 UMSHA BY UZMA BABAR — titled Khwab, the collection was pleasantly surprising. Some noteworthy pieces from the collection saved it from becoming forgettable and ordinary. These included green embroidered lehngas with heavy borders, tea pink shirts and double dupattas. Actress Sana Javed showstopped for the designers wearing a long peach shirt with dupatta. 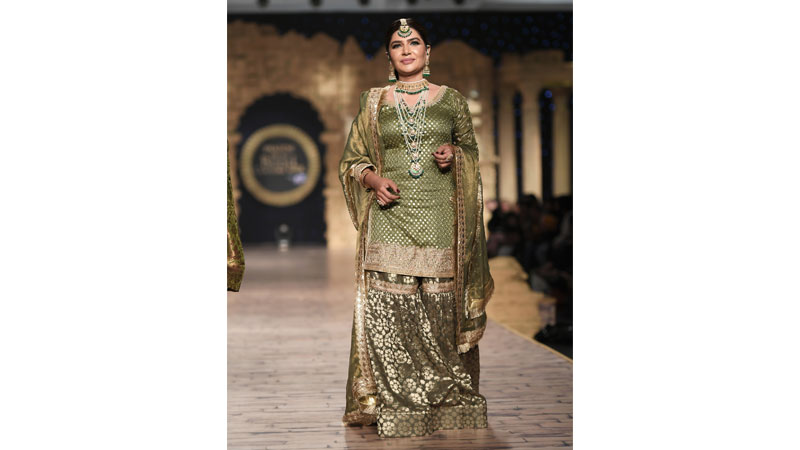 MEHDI — Show Two started with Mehdi’s collection titled Myth reinventing classic silhouettes in a dramatic style. We love the designer for his decent bridal wear that incorporate vintage designs with modern cuts. The greens were refreshing and had a touch of traditional look. The shararas were beautifully created, however former supermodel Iffat Omar, who was the showstopper, looked a bit uncomfortable wearing an ill-fitted, tight shirt. 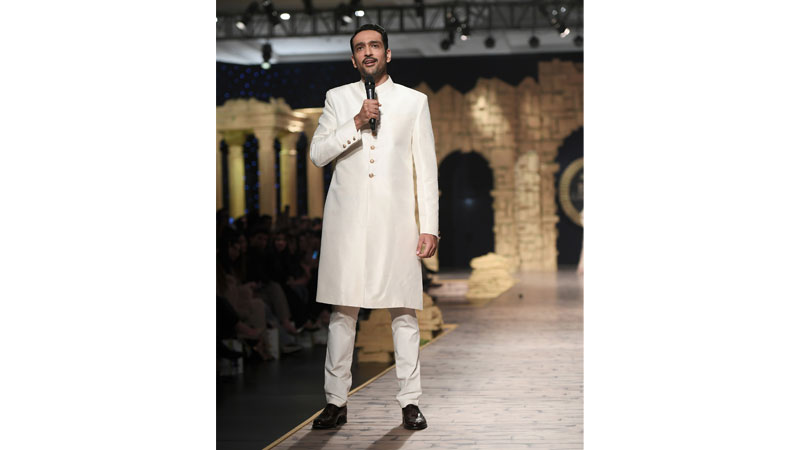 ANAYA BY KIRAN CHAUDHRY — her collection was a fusion of vintage glam with contemporary aesthetics. The collection was classy and distinct. Japanese cut stones with soft pastel colour pallets on delicate fabrics like tulle and organza were used. The collection was all about contemporary and bold cut lines. The colour palette was serene and sombre. The highlight of the designer’s work was her use of assorted embellishments such as pearls, stones, crystals infused with bold eye-catching cuts. Singer and writer Ali Sethi showstopped for the designer wearing a beautiful pearl white sherwani and trouser pants. 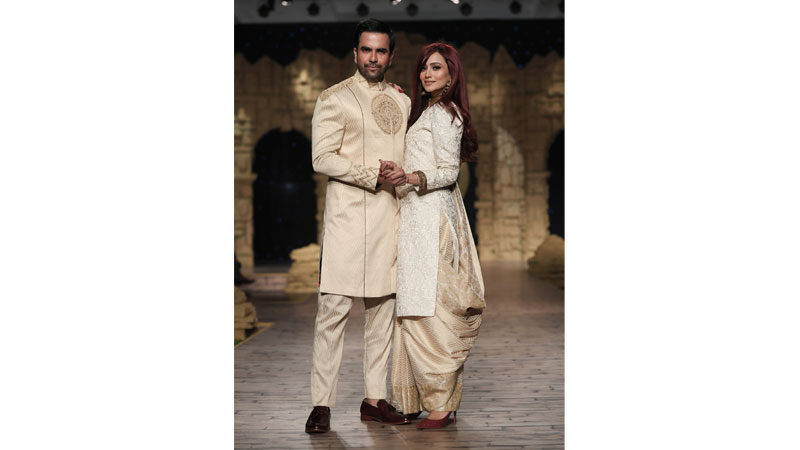 MUNIB NAWAZ — the esteemed designer’s collection was titled November Rain. The colour palette ranged from ivory to black. The designer is a pro at menswear and it showed by the extremely neat stitching, fittings and fabric used. The designing was minimal with the lush fabrics doing the talking, making a man look suave and decent. Actor and singer Junaid Khan showstopped for the designer. 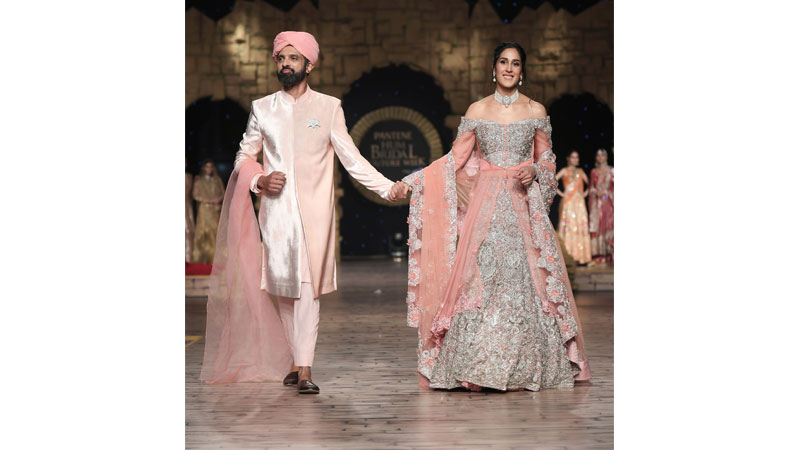 HONEY WAQAR — saving the best for last, renowned and veteran designer Honey Waqar showcased her collection which could take your breath away. Exuberant colours, elaborate patterns, shawls, maharani kurtas, peacocks and paisleys, silks, mahogany colours and ornate jackets were the highlights of the collection which was titled Gul Mohar. The collection was classy, distinct and signature Honey Waqar. The use of pure fabrics is what set it apart. Actress Mira Sethi showstopped for the designer wearing a pink bridal gown. 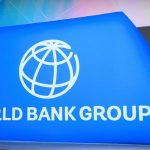