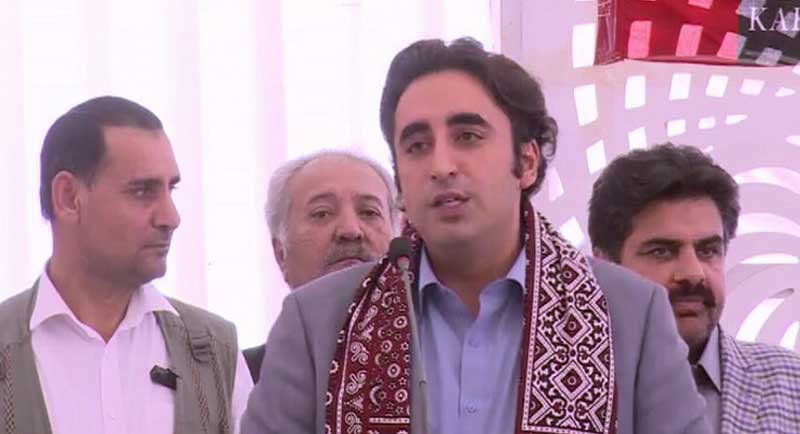 Pakistan People’s Party (PPP) Chairman Bilawal Bhutto on Saturday said that infrastructure had to be focused on to fight the economic and governance crises, and only public government could do that.

Addressing at the ceremony of seven mega projects, Bilawal expressed that 10 million jobs had to be provided across the country to combat the economic crisis. “Provision of jobs is a tradition of PPP, and people will get jobs with the seven mega projects,” he said, adding that the incumbent government was encouraging only unemployment.

Bilawal asserted that the federal government facilitated billionaires with tax amnesty scheme whereas the PPP launched a revolutionary Benazir Income Support Programme (BISP) for the public. He went on to say that the ‘selected’ and incompetent government could not alleviate the problems of people. “The country has plunged into the tsunami of inflation, while small businessmen are stuck into the storm of taxes,” he added. The PPP chairman said that the bureaucracy was suffering at the hands of the National Accountability Bureau (NAB) in the country. He maintained that Prime Minister Imran Khan had worsened the economy of Pakistan.

On the other hand, Bilawal Bhutto expressed that Sibghatullah Shah Rashidi Road, Shaheed-e-Millat Road and Sunset Boulevard Flyover were completed in just five months. “Seven mega projects have been completed today, which is vital for Karachi,” he added.

He said that completion of all the projects was a proof of all the hard work done by provincial chief minister, Syed Murad Ali Shah, and his team. “The PPP is doing developmental work in this environment,” he added. On the other hand, PPP Parliamentary Leader in Senate Sherry Rehman said that the vengeful government was only politicking over allegations and had nothing to give except abusive language.

Talking to the media during her visit to Sukkur to attend the NAB hearing against former leader of the opposition Syed Khursheed Shah, the PPP leader said that several ministers and advisers of the government were facing charges in NAB inquiries but no action was being taken against them.

She said that the government had made the parliament and the Election Commission of Pakistan (ECP) dysfunctional, as the rulers were well aware of the fact that the ECP would send them packing in the foreign funding case. “They are only repeating ‘accountability, accountability’ … Which case has been proved against anyone in the country so far,” she questioned.

“The history will tell the story of the game played in the name of democracy,” she further said. “The parliament has been locked down and the Election Commission made disabled.” She rejected the fake cases and accountability, and affirmed that the rulers only believed in politics based on derogatory remarks.

“No action has been taken against any minister. Why has Aleema Khan [PM Imran Khan’s sister] not been held accountable till now? Khyber Pakhtunkhwa (KP) government is itself a joke.”

The foreign funding case is being probed since 2015, and they don’t want any question over it, she said. “Why they are not being made accountable over their foreign funding?” she further asked. She said the PTI government had taken more loans than any other party in the history of Pakistan. “Inflation has eroded the purchasing power and people are even unable to buy school uniforms for their children.”