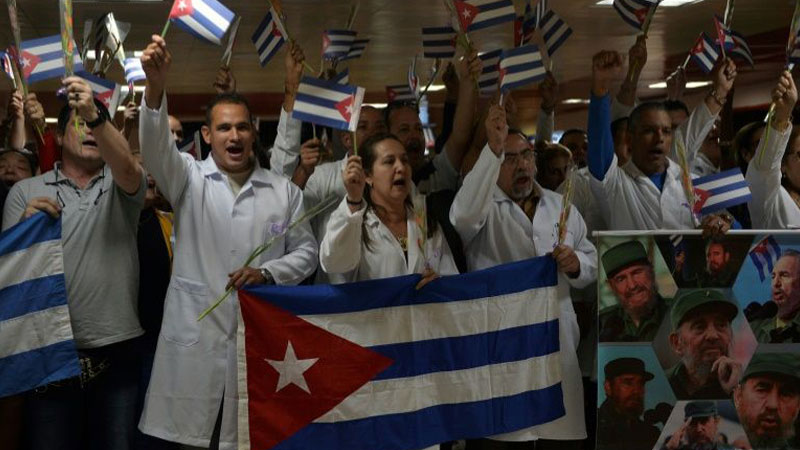 Luisa Garcia received a hero’s welcome when she arrived back in Havana last month, one of hundreds of Cuban health workers sent home by the Communist-run island’s erstwhile allies.

In the space of just a year, 9,000 doctors from Cuba’s “medical brigades” have trooped home after former allies turned them out, delivering a financial and political body blow to the cash-strapped government.

“Thousands of patients are being deprived of medical services,” said Garcia, lamenting her premature departure from Bolivia.

Garcia was one of more than 700 Cuban health workers providing medical aid in Bolivia — a staunch ally under ex-president Evo Morales — until the new right-wing interim government pulled the plug and sent them home.

Following Brazil’s lead in 2018, El Salvador and Ecuador have also ended their ties with the program through which Havana sends thousands of doctors worldwide — a key part of Cuba’s “white coat diplomacy” introduced under late ruler Fidel Castro.

Cuba blames the United States for campaigning to discredit an initiative that has sent more than 400,000 health workers to 164 countries.

US Secretary of State Mike Pompeo praised countries “for refusing to allow the Cuban regime to benefit from the smuggling of doctors,” saying 75 percent of their salary was withheld by the Cuban government in a modern-day form of “slavery.” Brazil’s right-wing President Jair Bolsonaro sent 8,000 Cuban health workers home when he came to power, accusing Havana of using the program to infiltrate intelligence agents.

Members of the Brazil contingent arrived home last year to kisses on the cheek from President Miguel Diaz-Canel.

He lauded them as “apostles of Cuban health care” who had gone “with altruism and full dedication to places where there was no medical assistance.”

Cuba has been left in the cold by recent electoral swings in Latin America that ousted leftist governments.

Havana’s medicine program was provided free of charge to Bolivia and El Salvador. Ecuador paid for its contingent of 382 Cuban health professionals, as did Brazil.

The expulsions are a setback for Cuban revenue. The country earned more than $6.3 billion from the program in 2018, money used to finance its own free healthcare system.

“Sending doctors abroad continues to be the main source of foreign income for the economy, and they are difficult contracts to relocate because they depend on the agreements with governments, which are very sensitive to political cycles,” said economist Pavel Vidal at the Xavierian University of Colombia.

Dr Michael Cabrera, deputy director of the Central Medical Cooperation Unit — a state agency that oversees the sending of Cuban doctors abroad — told AFP in an interview that Cuba would absorb the shock. “We knew we were not going to continue in Brazil and we prepared for 2019 according to this reality,” he said.

“We are in line with our forecasts, with the exception of Brazil, which obviously represented a percentage among all our operations,” he said.

The US has accused Havana of threatening doctors wishing to leave the program, but Cabrera insists medics working abroad “get better benefits than they can in Cuba.”

Doctors and paramedics receive between $300 and $900 in monthly food allowances, depending on the host country. Meanwhile, they continue to receive their average $50 salary in Cuba.

They can resume their old job when they return to the country, and have other privileges such as being able to import domestic appliances.

According to Cabrera, the dropout rate is low, despite official US encouragement to defect. Historically, “more than 95 percent” come back.

Cuba provides the program for free in 26 countries.

Havana said it is looking to boost the program in China, Saudi Arabia, Kuwait, Vietnam and South Africa.

The US is keeping up the pressure, however.

“The Castro regime sends up to 50,000 Cuban medical staff overseas to work in harsh conditions. Stories of abuses abound. The regime pockets 75% of doctors’ pay, which funds repression in #Cuba & #Venezuela,” Deputy Secretary of State Micheal Kozak said in a recent tweet. For political scientist Estaban Morales the aim of these messages is clear.

“It’s part of the economic aggression against Cuba, the same as sanctions against tourism and remittances — it’s taking revenue from Cuba.”