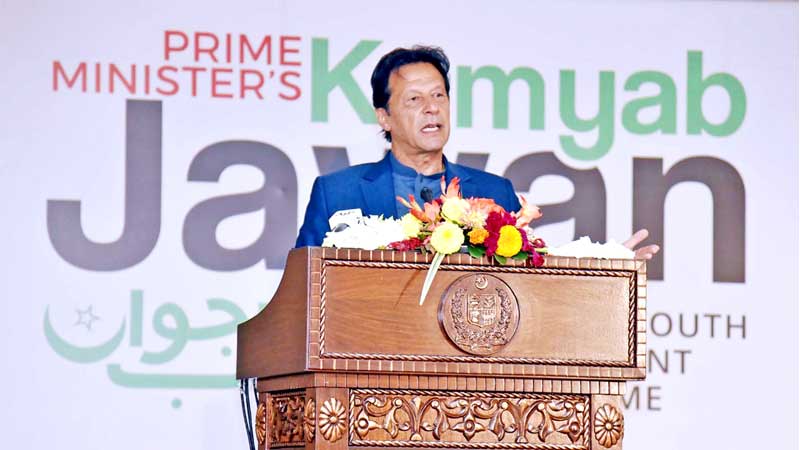 Prime Minister Imran Khan Friday said the government is pursuing its agenda of promoting small and medium enterprises (SMEs) by providing loans and bringing ease of doing business, besides reshaping its policies.

Addressing a ceremony to distribute cheques among the beneficiaries of business loan under the Youth Entrepreneur Scheme, the prime minister said the SMEs are the backbone of every economy which create the most employment opportunities.

The prime minister said around one million applications had been received within 15 to 20 days, which manifest the people’s interest in the scheme. The utmost effort has been made to make the scrutiny process fully transparent and merit-based, he said, adding it is pleasing that around 190,000 women have also applied for loans.

He said it is among the government’s responsibilities to create an atmosphere for jobs creation by removing all impediments in the course of establishing businesses. He said owing to a merit-based and transparent system in the United Kingdom, the Pakistani expatriates have joined the textile industry of Manchester as labourers and within a decade they purchased industries there. But the same people could not excel in Pakistan as the old mindset and practices here did not allow the businesses to flourish, he regretted. However, the incumbent government is in the process to do away with all such policies, he added.

The prime minister told the gathering that only the societies with passion and merit could progress in any fields, including sports, regardless of their size and population. The government, he said, is making all-out efforts to bring ease of doing business to exploit the true potential of the country particularly by protecting the interests of the SMEs. He said the SMEs always need financial support from the government, which is being extended as the sector had faced neglect in the past.

The prime minister said the government’s efforts for bringing ease of doing business are coming to fruition as the World Bank has also upgraded Pakistan’s ranking by 28 points on this account. He said it is pleasing that some applicants have also got loans to execute the tourism projects which can pay dividends within a short period. The number of tourists is increasing as the people visiting the tourist spots share their photos on social media which attracts others to those venues.

Imran Khan said considering the growing number of tourists, the people of the areas concerned have opened up small guesthouses or rented some portion of their own houses to earn money. He said a new era is about to start in the tourism sector and urged the youth to exploit the potential to uplift the country.

He asked Special Assistant on Youth Affairs Usman Dar to invite him again for the second phase of cheques distribution as he always fells pleasure by seeing the youth setting up their businesses to achieve financial independence. Later, he distributed cheques among the successful candidates who had applied for business loans from across the country, and wished them good luck for their future business plans.