Iraq revolution will be dramatized, written, read, and painted 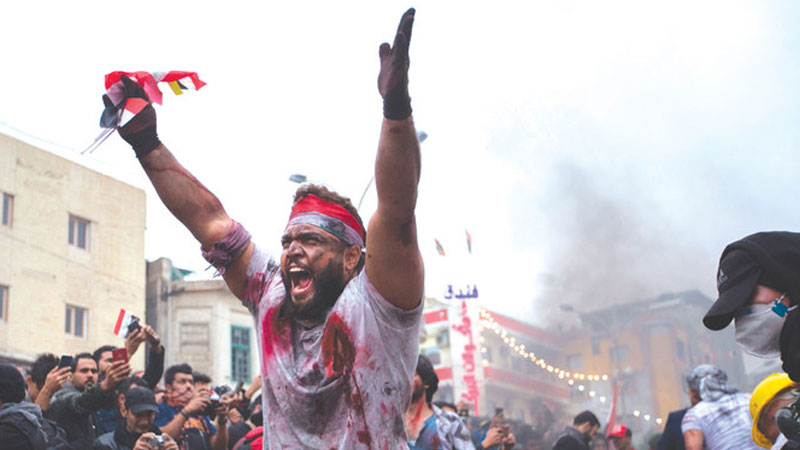 The pops of gunfire rang out across the protest camp in Iraq’s capital. Blood-stained bodies writhed on the pavement, and smoke from burning tires smarted the captive audience’s eyes.

But for once in recent weeks, the scenes playing out in Baghdad’s Tahrir Square were a dramatization, put on by actors who traveled 600 km from the port city of Basra.

To an audience in tears, they acted out protesters railing against corruption and the lack of jobs, and filming with smartphones to broadcast the rallies live on social media.

Suddenly, the actors crumpled to the ground, motionless, under a volley of tear gas canisters and live rounds.

Each actor took turns recounting the story of his “martyr,” weaving through the stunned spectators and occasionally folding into one of their hands an Iraqi tricolor labeled with the names of towns where dozens have died.

The south has been particularly bloody over the last week, pushing the two-month toll to nearly 430 dead and 20,000 wounded — the vast majority of them protesters.

In a time of such hope and heartbreak, art is the answer, says 30-year-old Ali Issam, one of the actors.

“Art is finally playing its true role: Carrying the voice of Iraq,” he told AFP.

As anti-government demonstrations in the capital and Shiite-majority south enter their third month, they are being turned into plays, paintings, poems and literature.

Tahrir has become an art hub, a rare space for free expression in a country where conservative tribes, paramilitary forces and powerful politicians have at various points tried to snuff out criticism.

“It’s a mini-ministry of culture,” said Muslim Habib, a young director from Baghdad.

Every day at dusk, he sets up a small projector in a tent on Tahrir, marked with a huge banner identifying it proudly as “Revolution Theater.”

Inside, he screens documentaries, shorts and other works by Iraqis both at home and abroad and hopes to soon show “films from the revolutions in Ukraine, Egypt or Syria.”

Rows of chairs spill out from the tent onto the pavement, packed nightly with young and old, men and women, protesters and curious onlookers.

Even police officers poked their heads in for a glimpse.

Across the rest of the square, poets puffed out their chests and recited their latest revolutionary verses while small groups debated politics and philosophy.

Busking musicians dotted the nearby streets and painters canvased the walls with large murals and “calligraffiti” — a hybrid of graffiti and intricate Arabic calligraphy.

Culture even reigns in the “Turkish restaurant,” the gutted 18-story building that has been occupied by protesters for two months after decades of abandon.

A 24-hour library has opened in its ground-floor garage, a rare sight in Iraq where now just 50 percent of adults know how to read despite its legendary role as a literary hub.

The library is full of dozens of worn second-hand books, ranging from translated American novels and political essays to romance novels and theological works.

Curled up with a book in his hand, Mustafa said he stopped going to school at a young age so he could work to provide for his parents.

Already married, he worked in a printing shop but now peddles bottles of icy water in Baghdad’s traffic-clogged streets during sweltering summers.

“Reading is my way of continuing my education,” Mustafa said, insisting Tahrir should be flooded with novels for protesters.

“This is the proof that we are awake, we understand what is happening and we’re trying to succeed,” he said.

Youth make up a vast majority of the protesters in Tahrir, as well as 60 percent of Iraq’s 40 million people.

Many have said their active roles in demonstrations disprove those dismissing them as the “PUBG generation,” a combat video game that is so popular among Iraqi youth that parents often scold them for playing it too much. “Yes, we are the PUBG generation — but we are also a cultured generation,” chuckled Mustafa, before turning back to his book.