No force can stop Kashmiris from securing their freedom: AJK prez 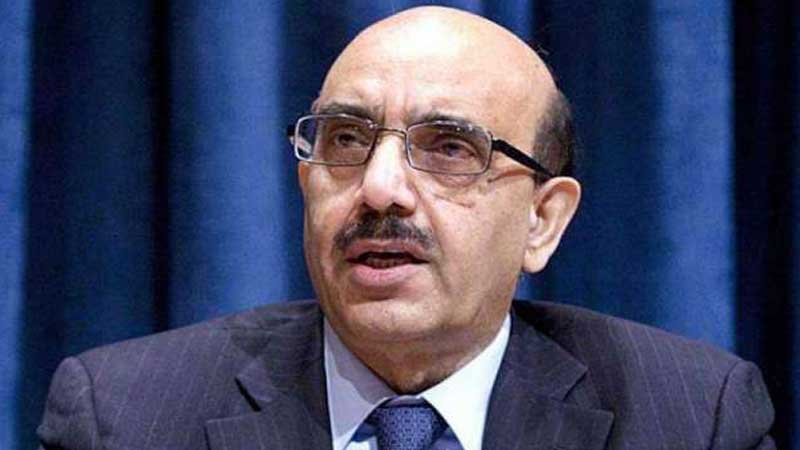 Azad Jammu and Kashmir President Sardar Masood Khan has said that no force can stop the people of Kashmir from achieving their freedom and they would continue their just struggle for right to self-determination and complete freedom from Indian occupation.

“Fearless people of Indian occupied Jammu and Kashmir (IOJK) are sacrificing lives for their right to self-determination granted to them by the United Nations Security Council, but India was constantly denying this right to them for the last seventy years and using brutal force and perpetrating atrocities to subdue and crush the ongoing freedom movement in Indian occupied Kashmir (IOK)”, he said this while briefing the Pakistani media at Pakistan High Commission London on Wednesday.

Sardar Masood Khan was flanked by Pakistan High Commissioner (HC) to United Kingdom (UK) Mohammad Nafees Zakaria. Strongly condemning the gross violation of human rights in Indian occupied Kashmir, the AJK president said that India through its brutal occupation forces have sieged the IOJK for the last 122 days and the worst humanitarian crisis has been created by the fascist Modi regime in the occupied valley.

He said that due to lockdown of Occupied Kashmir, the people have also suffered economically as they were unable to sell their agricultural products like fruits, vegetables, and grains. He said that due to brutal actions by Modi led fascist Indian regime in occupied Kashmir has become one of the biggest criminal regimes of the century in the world.

Sardar Masood Khan said that India was planning to divide occupied Kashmir into three parts and wanted to settle Hindus in occupied Kashmir following the “Settler colonialism” policy adopted by Isreal in Palestine, to turn Muslims majority into a minority.

He strongly condemned and said that India was issuing the fake maps of Indian occupied Kashmir, Azad Kashmir and Gilgit Baltistan. Sardar Masood Khan said that the human rights crisis in IOJK had assumed sinister and unprecedented proportions.

After August 5, he said, the territory of Jammu and Kashmir was invaded by India, reoccupied and bifurcated and now colonization was progress as the Muslims majority was being converted into a minority and Hindus from all over India, in a planned manner were brought in to settle in IOJK.

He said that after October 31, India had issued fake maps wherein they had relegated IOJK and Ladakh to Union Territories and included Azad Kashmir and Gilgit Baltistan within the so-called territory of India. The AJK president further said that killings, tortures, rapes of women and the kidnapping of Kashmiris people was continuing unabated in Indian occupied Kashmir especially after August 5, illegal action by the fascist Indian government.

He called upon the international community and the permanent five members of UNSC to take notice of the humanitarian crisis in occupied Kashmir and urge India to stop it forthwith. He also urged them to press India for implementing the UNSC resolutions on Kashmir and allow people of Kashmir to exercise their birth right to self-determination with UN-sponsored plebiscite enable Kashmiris to decide their future destiny.

Sardar Masood Khan also warned India to stop subversive terrorist activities by using its agents in Karachi, Quetta, Khyber Pakhtunkhawa (KPK), AJK and Gilgit Baltistan. He said that the discovery of fifty mass graves who were martyred by Indian occupation forces in occupied Kashmir in the name of foreign terrorists but when their DNA tests were conducted had revealed that all those killed were the local innocent Muslims of Indian Occupied Kashmir who were kidnapped and killed by India occupation forces.

He demanded that the Indian government and its occupation forces, the perpetrators of this crime should be brought to justice. He thanked Pakistan for extending moral, political and diplomatic support to the people of Indian occupied Kashmir in their struggle for the right to self-determination and freedom from Indian occupation.

He said that Pakistan wanted to resolve the Kashmir dispute peacefully and according to the UNSC resolutions on Kashmir for peace and prosperity in the region. He warned that in case of any misadventure by India, the Armed forces and people of Pakistan and Kashmir were ready to defend their motherland with full force and defeat the enemy.

He also warned that any war between Pakistan and India on Kashmir would be not only dangerous to the region but also be a threat to international peace. He called upon the British-Pakistani and Kashmir living in UK to highlight and discuss the Kashmir issue and right of self-determination to people of Kashmir with the UK parliamentarians and other political figures in their respective constituencies, besides exposing the gross violation of human rights by India in IOK.

Sardar Masood Khan also appreciated Pakistan HC to UK Mohammad Nafees Zakaria for his efforts in promoting Kashmir cause at the international level. In his remarks Mohammad Nafees Zakaria said that India was involved in massive violation of human rights abuses in Indian occupied Kashmir. Zakaria said that Indian atrocities on defenceless Kashmiris besides mass killings, mass blindings, mass graves and other measures to systematically change of the demography of IOK has been documented by the human rights organizations and NGOs.