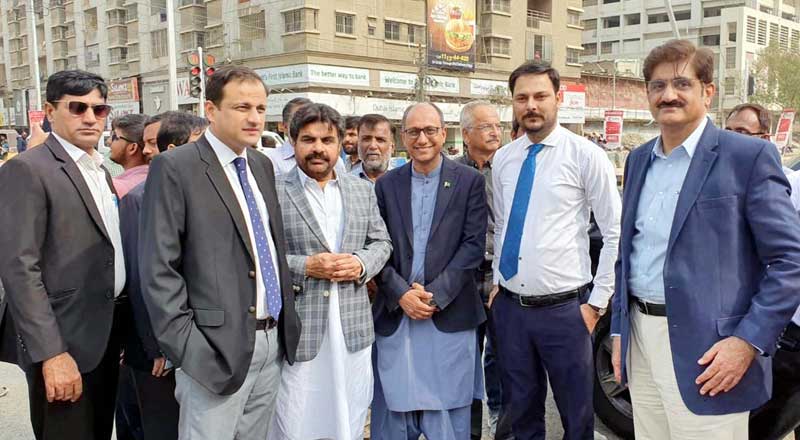 Sindh Chief Minister Syed Murad Ali Shah has said that the Sindh government was trying its best to complete the ongoing development work in all the districts of Karachi so that facilities could be provided to the people without ado.

He said that wherever new projects were needed to facilitate the people of the metropolis, new development projects would also be initiated soon. He said this while reviewing the on-going development work on underpasses at Bahadrabad on Thursday.

Sindh Minister for Information, Archives and Labour Saeed Ghani, Minister for Local Government Syed Nasir Hussain Shah and Advisor to CM on Law, Environment & Climate Change Barrister Murtaza Wahab accompanied the Chief Minister during his visit. Speaking on the occasion, Sindh Information Minister Saeed Ghani said that the work of one of the two underpasses had been completed which will be inaugurated in a couple of days, while the construction of other underpass would also be completed in the month of December.

Saeed Ghani said that two Flyovers in Korangi would also be opened for the public soon. Speaking on the occasion, Syed Nasir Hussain Shah said that development work on the 12 main roads of Lyari was also underway and this would be completed soon and roads would be opened for the public as soon as possible. He said that work on the repairing of damaged water and sewerage lines in Karachi, and other developmental works, including the construction of roads, was underway swiftly.

Separately, Murad Ali Shah said that we would have to create reading habit and book loving among our new generation because it is the only way to inculcate the spirit of humanity, co-existence and respect for everyone, otherwise the trends of ‘we feeling’ and extremism would override them of us.

This he said while addressing inaugural ceremony of 25th Karachi International Book Fair organized by The Pakistan Publishers & Booksellers Association in association with National Book Foundation here at Expo Center.

He said that reading habits and hunger for best books which used to be the diction of our seniors have gone away. “This is evident from the fact that hardly any young person is sitting in the audience here,” he said and added “we will have to revive our old culture of finding best books in the shelves of libraries, in the corners of books stores, on the push-carts and footpaths where old books were put on display on weekends,” he said.

Recalling his old days as a student, he said that in the libraries of college and university a student was entitled to borrow only two books and on the day of passing out the student would have to show his or her clearance certificate from the librarian to receive your degree.

“When I was enrolled in an American University I went to library and asked the Librarian how many books I borrow here,” Shah recalled and said “she replied as much as you can carry.” This is the difference between them and us and we would have to attain that position if we want to assail in education, the chief minister said.

He said that he used to read lot of books and was appointed in the library in USA University. “In that Library I saw those books on Pakistan which have never been seen or displayed here,” he said and added “the historic census reports I found there and make their photo copies and broth them here.”

Shah congratulating the organizers of 15th Karachi International Book Fair organizers, said that they were doing a crusade and “I am glad to hear that every year their visitors were increasing,” he said hoped that the parents would play their due role in developing reading habits among their children.

The chief minister said that in this digital age most of the students read books on the modern gadgets such as mobile phones, Ipads and laptops but the satisfaction and the joy received in reading a hard copy could not be found in digital books. “I am not discouraging reading of digital books but just sharing my personal experience,” he said.

Murad Ali Shah said that he was planning to establish a digital library in the existing libraries or as sperate one which facilities of café, garden and such other facilities.

Talking to media, the chief minister said that he was working hard to fill the vacant position of teachers in Sindh.

“There are more than 7000 vacant positions of teachers and we are planning to recruit best teachers through third party,” he said and added only best teacher was lacking in the system, otherwise the government was offering best salary structure, facilities and working atmosphere in our schools.

To another question, the chief minister said that the education department was struggling to change the culture under which everyone wanted to get teachers transferred from one school to another.

“We have banned the transfers of teachers before the end of academic session,” he said.

To a question, the chief minister said that the police were investigating Dua Mangi kidnapping case from different angels. “I have given a chance to the Karachi police to work out the case and recover the kidnapped girl,” he said added he was sure the case would be resolved very soon.

Addressing the 12th International Urdu Conference, Sindh Chief Minister Syed Murad Ali Shah welcomed the scholars, literary figures from all over the world in the capital city of the province.

He said the city used to bleed. Burning public private properties, kidnapping for ransom and target killing were orders of the day. “Organizing literary events, musical nights and sports activities was impossible even to think but from the last many years this city has been turned into hub cultural activities and the city love and affection,” he said.