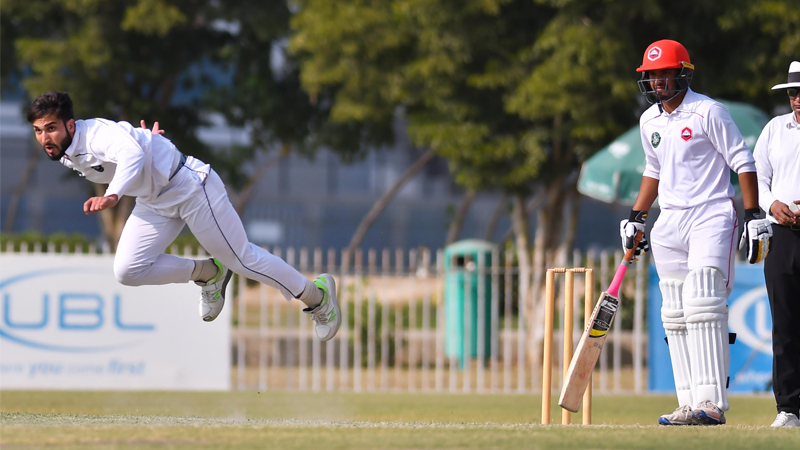 KARACHI: Two quick Khyber Pakhtunkhwa wickets, minutes before the close of play gave Northern the upper hand on an action-packed day-three of the Quaid-e-Azam Trophy first-class 10th round game being played at the UBL Sports Complex in Karachi on Wednesday. Northern who need an outright win to book their place in the December 27-31 tournament final declared their second innings at 139 for six, setting Khyber Pakhtunkhwa (needing a draw to qualify for the final) an enthralling 245-run chase. Northern then made full use of the nine overs they bowled at Khyber Pakhtunkhwa before close by taking the prized scalps of Khyber Pakhtunkhwa captain Fakhar Zaman (7) and his fellow opener Sahibzada Farhan (9). Khyber Pakhtunkhwa will start the fourth and final day on Thursday needing another 206 runs for a win while Northern would aim to bowl out the opposition in what promises to be a thrilling day with the all to play for both sides.

On Wednesday, resuming their first innings at the overnight score of 156 for six, Khyber Pakhtunkhwa were bailed out of trouble and the prospects of a follow-on by a 110-run seventh wicket partnership between Mehran Ibrahim and Rehan Afridi. Mehran (54 off 98 balls, nine fours) fell on the stroke of lunch becoming the sixth victim of pacer Mohammad Waqas. Rehan remained unbeaten on 95 off 147 balls, his innings included 11 fours and one six. He found valuable support from Usman Shinwari (14 off 22 balls, two fours). Khyber Pakhtunkhwa were bowled out for 306 handing a 105-run lead to Northern. Waqas finished with figures of six for 109, Northern captain Nauman Ali took two wickets for 56 runs.