‘Watchmen’ recap — a god among men 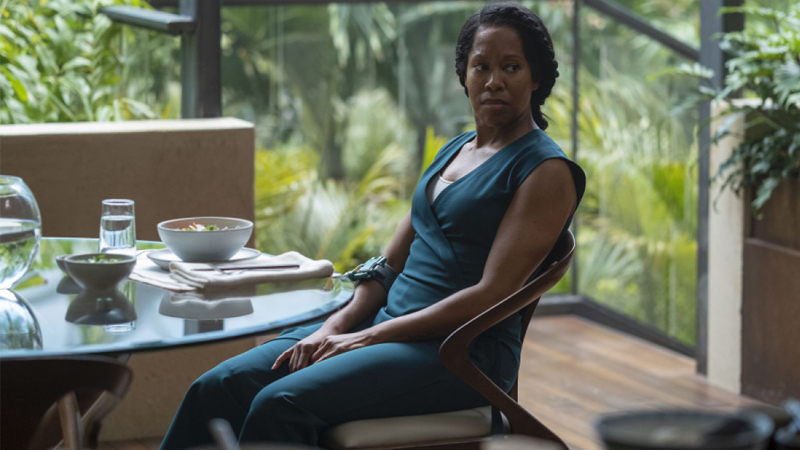 It is easy to understand why some fans of the Watchmen comic were sceptical of this show’s existence and its structure when it debuted.

Yes, it existed in the same universe as the comic, and treated everything that Alan Moore and Dave Gibbons did as sacrosanct(*), but in addition to having a wildly different setting and subject matter, it also barely featured any characters from the comic. Adrian Veidt wasn’t explicitly identified as such until the third episode, which is also when we finally met Laurie Blake. Even if the Seventh Kavalry members wore masks inspired by Rorschach’s, it started off as a version of Watchmen pretty light on people from the original story.

Or not, it turns out.

Last week, “This Extraordinary Being” upended our perceptions about the origins of superheroism by revealing Hooded Justice’s true identity. “An Almost Religious Awe,” meanwhile, concludes by upending our perceptions about this Watchmen as a whole. Occasional Europa interludes aside, the series’ physical scale seemed relatively small, and the thought of Dr. Manhattan – omnipotent, omniscient, naked, blue, capable of going anywhere and doing anything – being a significant part of this story about America’s ugly history of race relations seemed almost laughable. When “An Almost Religious Awe” opened with a videotaped biography of Manhattan, I took the shot of his gigantic form striding over the Vietnamese countryside (his face just out of frame) as the closest we would ever get to seeing him in this series, because how on Earth – or Mars, or Europa – could this version of Watchmen have room for the naked blue god?

Unlike Damon Lindelof – or this episode’s writers, Stacy Osei-Kuffour & Claire Kiechel – I wasn’t thinking nearly big enough. Not only does it turn out that we’ve been seeing Dr. Manhattan from the very first episode – down here in Tulsa, and not just in that satellite image from the Martian surface(*) – but his current state of being gets even deeper into this show’s primary area of interest. Because if the first superhero of the Watchmen universe could be black, why can’t God be black, too?

The internet being the internet, some already put this puzzle piece together weeks ago, because Watchmen laid out enough clues here and there. In hindsight, among the hints or potential hints:

In the second episode, Will jokes that he is really Dr. Manhattan, to which Angela replies that the ability to appear like a normal person isn’t one of Manhattan’s powers. When Angela tells Cal about Will’s assertion that Manhattan can shape-shift, Cal is almost too quick to reply, “No he can’t. And he’s on Mars.”

In the third episode, Laurie tells Angela, “Your husband’s fucking hot.” Which… yes, obviously he is. But also, Laurie spent two decades in a relationship with Dr. Manhattan, so on some subconscious level, she may have been attracted to Cal for reasons that go deeper than however his skin currently looks.

In that episode’s framing device with the phone call to Mars, Laurie also says, “You’re probably never gonna hear this, anyway.” Which could mean that she knew he wasn’t on Mars at all. (Or maybe she also knows that Cal is her ex?)

In the fourth episode, Cal is very adamant and no-nonsense in telling the kids that heaven is pretend – which in hindsight is very much the kind of thing a rigidly scientific being like Dr. Manhattan would think and say. To him, matter is only matter, just taking different forms along the way.

You’ve been a great audience. Try the veal!

Most of the dogged Reddit sleuths, though, seemed to think that the twist would be that Angela was blind to her husband being Dr. Manhattan. Instead, the episode’s riveting closing moments – scored to a piano cover of David Bowie’s “Life on Mars,” of course – reveal the opposite to be true: Angela has known all along, but for reasons yet to be explained, Cal has no idea who and what he really was. Angela literally has to break his skull open – and pull out a metal object shaped like a hydrogen atom (Dr. Manhattan’s forehead logo), glowing blue – to start bringing him back to who and what he was.

Yet if unmasking our heroine’s spouse as the deity of the Watchmen universe makes the story much bigger in some ways, it makes it a lot smaller in others. Now, Angela Abar is not only the granddaughter of the most important figure from the first age of heroes, but the wife of the most important figure of the second age. It’s all tied very tightly together, down to the role Dr. Manhattan plays in her own origin story, which takes up the great majority of the episode.

The hour functions as a companion to “This Extraordinary Being” – and features periodic flashes to that episode. As Angela gets the Nostalgia leeched from her bloodstream, her memories become tangled up in Will’s, so that we get a glimpse of the Greenwood massacre right before Angela’s own parents are murdered, or see a young June hugging Angela-as-Will right after we see a very old June(*) die of a heart attack on the same day she meets her granddaughter for the first time.

Dr. Manhattan is a character who exists independent of linear time. He experiences every moment of his life all at once, meaning his personal history constantly repeats itself. And as his wife’s origin plays out, we see that her family history keeps repeating, too. Laurie pointed out that superheroic identities are inspired by childhood trauma. For Will Reeves, it was losing his parents right after watching Trust in the Law. For Angela, it’s seeing her parents killed by a bomb moments after she pleaded with them to let her watch Sister Night: The Nun With The Motherf%$ing Gun, a delightfully-titled blaxploitation movie featuring an actress made up very much like the adult Angela in her costumed identity. It’s all obvious linkage, but no more than Bruce Wayne modeling his costume after the bat that randomly crashed through his mansion’s window.

So Hooded Justice’s granddaughter is set on a path to join the family business – both kinds of uniformed crime fighting, in fact – because her world blows up just like his did. In this case, it’s not racism that leads to parents dying, but anti-colonialism. Because of Dr. Manhattan, America won the Vietnam War and turned Vietnam into a state. For as much as Manhattan was treated with the awe of the episode’s title by many Vietnamese, there are plenty who resent the intrusion of him and his country onto their soil (we see a Manhattan mural covered in “MURDERER” graffiti at one point), and several of those malcontents conspired to attack representatives of that occupation, which tragically included Angela’s parents, Marcus and Elise. Marcus, when we briefly see him as an adult, is still scarred by the memories of Will angrily wiping the makeup off his face, inspiring him to warn his daughter, “People who wear masks are dangerous.” Yet his death leads Angela to putting on a mask. All of this has happened before, and it will all happen again, and a lot of it is Dr. Manhattan’s fault.

Because Angela is less under the influence of the drug this week, “An Almost Religious Awe” gets to spend a lot more time in the show’s present than “This Extraordinary Being” did. This includes a return trip to Europa, after Veidt and the clones got last week off, but also a chance to check in with other corners of the series. Wade doesn’t appear, but it’s implied that he killed all of the Seventh Kavalrymen who arrived at his house at the end of the fifth episode, and that he is now impersonating one of them. (One of the corpses that Petey finds is missing a mask.) Laurie has finally – with help from listening to Angela’s end of the Nostalgia-induced memory trip – pieced together the interlocking conspiracy involving 7K, Cyclops, and the costumed policing initiative, which she neatly lays out to a completely unimpressed Jane Crawford. But Laurie’s Columbo routine gets foiled when it turns out the Crawfords have a freaking trap door with a remote control in their living room, and soon she’s on the receiving end of a monologue from our story’s true villain, Joe Keene Jr. He may look handsome and act genial, but he’s seething with privileged resentment at having to even slightly inconvenience himself to make the world fairer for people who don’t look like him.

“The scales have tipped way too far,” he argues, in phrasing that is sadly too familiar from our world these days, “and it is extremely difficult to be a white man in America right now. So I’m thinking… I might try being a blue one.”

And with that, followed by Angela taking a hammer to Cal’s skull, the season’s endgame is finally revealed. Keene thinks he can somehow duplicate or steal Dr. Manhattan’s powers for himself, and it will be up to some coalition of Angela, Cal, Lady Trieu, and Will to stop the creation of an all-powerful bigot.

The elephant in the room has been revealed – both the metaphorical one (Manhattan), and the very literal one that is in the room next to Angela’s at Lady Trieu’s compound. The great beast, not Will, is soaking in the Nostalgia being extracted from Angela’s body, because, of course, an elephant never forgets. It feels like another prank, akin to Laurie seeing the car drop in front of her at the end of the third episode. But if that joke’s on Angela, the bigger one has been on her husband, who has apparently lived a long time oblivious to his true nature.

“Hey, baby,” Angela tells him after violently waking him up. “We’re in fucking trouble.”

Hopefully, Seventh Kavalry will be in much more now that Manhattan has finally, fully come to Tulsa.

A few other thoughts:

Family history repeats itself even more literally with Lady Trieu: Bian isn’t Lady Trieu’s daughter, but a clone of her mother, who is being gradually fed Nostalgia so that Lady Trieu can have her mother present if/when she succeeds in saving the world.

Speaking of Lady Trieu’s mother, a Peteypedia entry on Lady Trieu describes her mom (also named Bian) as a “pachyderm mom.” Always comes back to elephants.

Even more than usual, the trips to Europa are played for pure comedy. We find out that Veidt has been silently enduring a yearlong trial for his abundant sins (murdering clones, trying to escape his confinement, transmitting obscene satellite imagery). In the end, his only arguments in his defense are a fart, followed by a stampede of pigs. Why is he not doing better to save himself? Perhaps the wink that the Crookshanks prosecutor gives him right before he breaks wind is a sign that the whole thing is yet another sham, like this whole English countryside existing on a moon hundreds of million miles away from the actual UK.

Laurie Blake, again summing up a key aspect of superheroics: “White men in masks are heroes. But black men in masks? Are scary.”

Finally, without spoiling anything that happens next week, I will tell all of you to watch through the end credits of that episode.