Thousands of animals sacrificed in Nepal Hindu ritual amid outcry 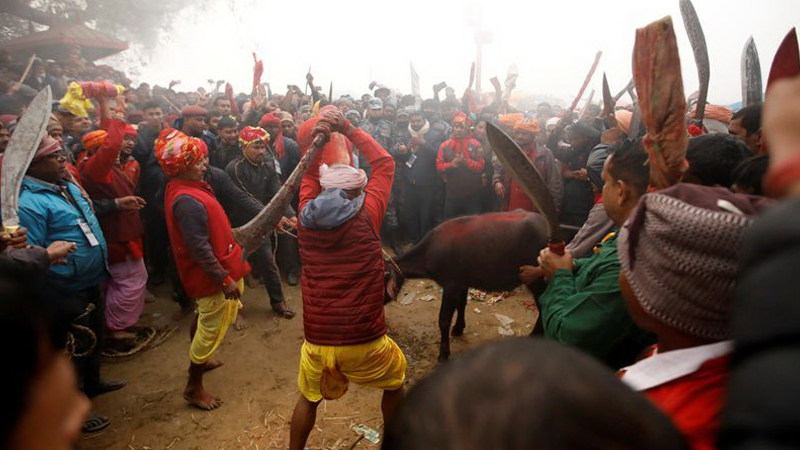 Tens of thousands of devout Hindus thronged a temple in southern Nepal where thousands of animals and birds were sacrificed this week, amid an outcry from animal rights activists who said the ritual was a cruel and gruesome spectacle.

The ceremony, held every five years at the Gadhimai temple in Bara in southern Nepal, is believed to be the largest such mass-slaughter event in the world and animal rights activists have been campaigning to end the practice for years.

On Tuesday, devotees carrying swords and large curved knives called khukurs beheaded more than 3,000 buffaloes near the temple, witnesses said. Animal sacrifices continued on Wednesday when goats and other animals were slaughtered.

“There is no justification for this mass killing, and it is truly heartbreaking to witness,” said Tanuja Basnet, director of the Nepal unit of Humane Society International, in a release that also called on the Nepal government to introduce a law banning animal sacrifice.

In 2016, Nepal’s Supreme Court said the practice should be prohibited, and it called on the government to frame a law that would gradually bring an end to the sacrifices.

Rajan Nepal, an official with Nepal’s Tourism and Culture Ministry, told Reuters the government has begun to implement the court directive.

“We’ve issued public appeals and consulted with stakeholders in the temple area,” he said. “It is related with tradition and cannot be halted immediately.”

Devotees believe the sacrifice, meant to appease Gadhimai – an avatar of the Hindu goddess of power, Kali – brings them luck and prosperity.

Authorities deployed 1,100 police to prevent clashes between activists and devotees at the site 10 km (6 miles) from the Indian border.

“We can only try and convince devotees not to sacrifice the animals, but cannot force them to stop,” said Bikash Khanal, the head of district police in Bara.

Khanal said fewer animals were sacrificed this year compared with five years ago due to awareness campaigns.

The heads of the sacrificed animals are buried in huge pits and hides and skins are often sold to traders. Some of the local communities also take the dead animals away for meat.