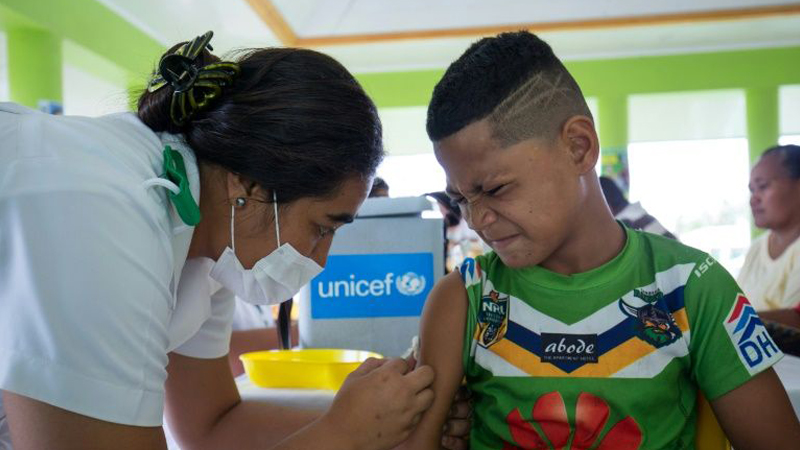 Authorities in Samoa asked unvaccinated families to display a red flag outside their homes on Wednesday to help a mass immunisation drive aimed at halting a measles epidemic that has killed dozens of children.

The tiny Pacific nation of 200,000 will grind to a halt on Thursday and Friday as non-essential government services close so public servants can help the vaccination campaign.

Over the two-day period, teams will go door-to-door administering vaccines in a desperate bid to raise the low immunity levels in Samoa that have fuelled the epidemic.

Immunisation is compulsory under a state of emergency imposed last month and officials asked unvaccinated families to identify themselves.

“The public is hereby advised to tie a red cloth or red flag in front of their houses and near the road to indicate that family members have not been vaccinated,” a public advisory said.

“The red mark makes it easier for the teams to identify households for vaccinations.”

Official data released Wednesday put the death toll from the outbreak at 60, up five on the previous day.

Most of the dead are children, with 52 aged four or under.

Infection rates continued to climb, with 171 new cases in 24 hours, bringing the national total to 4,052.

Vaccination efforts in recent weeks have concentrated on children but the government has now broadened its programme to include the entire population.

The immunisation rate was about 30 percent before the outbreak and officials say it has now reached about 55 percent.

“Our children and people will never become immune to any future epidemic unless we have almost 100 percent vaccination coverage,” he said while touring a hospital ward Wednesday.

“It’s the only antidote.” Samoa has received aid to combat the crisis from Australia, New Zealand, France, Britain, China, Norway, Japan, the United States and the UN.