There is no significant development in Dua Mangi Kidnapping and furious protesters of Karachi on Tuesday staged a protest and pressurized authorities for the safe return of Dua Mangi, who was abducted by unidentified persons from Bukhari Commercial Area in Defence Housing Authority (DHA) on Saturday night. 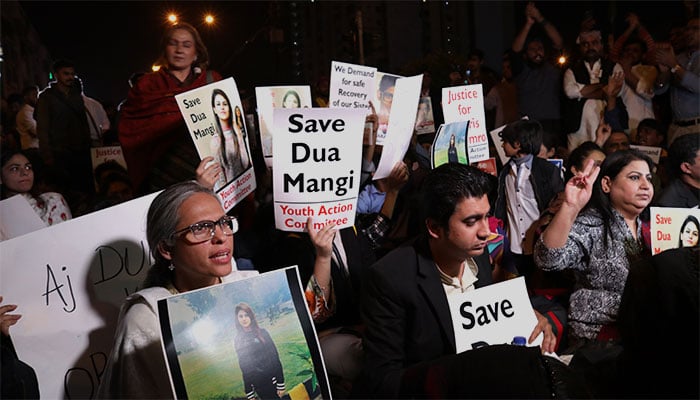 Dua’s friend, Haris Fatah, who was with her at the time of the abduction, was shot for putting up resistance. The protesters – including students, members of civil society, political leaders and friends and family of the kidnapped woman – held placards and shouted slogans, demanding her immediate recovery and justice for her family.

Mangi’s cousin, Rahul, who helped organise the protest from Lahore, told local news channel that “Even the CCTV footage was checked a day later. There is an existing bureaucratic lag and we don’t want that,” he said. “We also want them to disclose more information because we are still clueless.”

Meanwhile, Police have said they suspect a criminal gang is behind the kidnapping of Dua Mangi. A senior police official, who wished not to be named, told a local media channel that a preliminary probe into the case had revealed that a criminal gang had intercepted the 20-year-old girl and her friend as they were walking on the road.

Additionally, police claim they have made some progress in the case, citing the recovery of the car used by the abductors. The car was found abandoned in Gulshan, within the limits of Sharea Faisal.