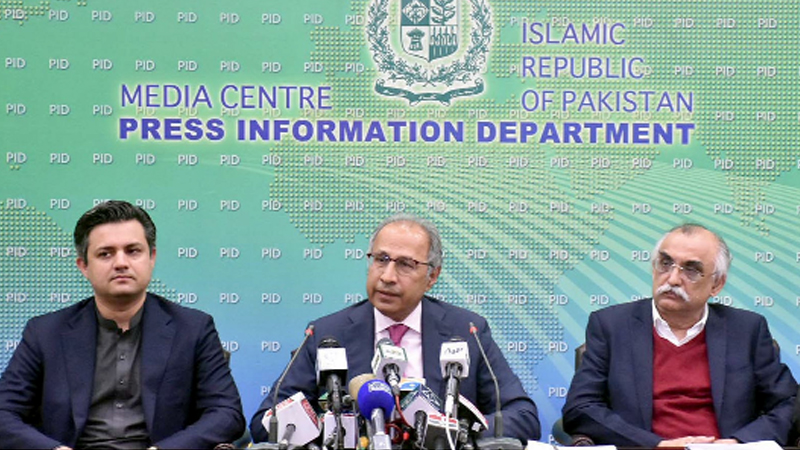 Adviser to the Prime Minister on Finance and Revenue Abdul Hafeez Shaikh on Tuesday said that leading international financial institutions were recognising the substantive efforts of Pakistan’s economic team which led to stabilisation of macroeconomic indicators.

Exports had started to increase with trade deficit shrinking speedily, portfolio and foreign direct investment (FDI) expanding, and growing tax revenues, coupled with a stable exchange, he said, adding all the indicators showed that Pakistan’s economy was now moving in the right direction and it would soon enter next stage of recovery and rapid growth.

Addressing a press conference here flanked by Minister for Economic Affairs Hammad Azhar and Federal Board of Revenue Chairman Syed Shabbar Zaidi, the Adviser said last month (November), almost 10% increase was recorded in exports while imports declined considerably, which resulted in contraction of the current account deficit by over 36%.

He said revenues had also increased by 17% in the first five months of current fiscal year as compared to the same period of last year.

Similarly, he said, the fiscal deficit not only went down as compared to the last year but it had gone in surplus if the interest payment was not taken in account.

“For the first time, the primary fiscal balance is in surplus now. Our revenues are more than expenditures, which is a positive sign for the economy,” he added.

He said the World Bank president during his visit to Pakistan had commended the performance of economic team while the Asian Development Bank (ADB) had increased its loan programme for the country by $3 billion.

Moreover, the International Monetary Fund (IMF) team during its review expressed satisfaction over meeting of the targets by Pakistan and issued the directions for releasing the second tranche of its loan, he added.

Hafeez Shaikh said Moody’s, the leading international rating agency, normally compared the economic performance of different countries. However, on Monday it upgraded Pakistan’s economic outlook from negative to stable which sent a positive message across the globe about the country, he added.

“Due to positive macroeconomic indicators, more and more people (investors) from abroad are attracted towards Pakistan as evident from portfolio investment of around $1 billion during the current fiscal year.”

If all institutions performed well then there would be no need to go back to the IMF again, he added

The Adviser said last month the foreign direct investment also witnessed a record increase of 236%, whereas local investors were also showing more trust as evident from the fact that the country’s stock market witnessed a significant positive change and crossed the 40,000 barrier.

“Bloomberg has reported that in dollar terms, PSX (Pakistan Stock Exchange) have proved to be the best performer in the world during the previous three months.”

compared to the same period of last year and hoped that the government would easily surpass the target of collecting Rs1,200 billion non-tax revenue by the end of current fiscal year.

He said the government was now focusing on providing maximum job opportunities to the people which was only possible by increasing economic activities in the country.

“We want that out exports should be increased and our businessmen get maximum profit. For this we are providing subsidy to the businessmen, beside loans,” he added.

He said the government was providing additional subsidy of Rs 300 billion on loans to the exporters.

Likewise, he said in the construction sector the government had announced to provide Rs 30 billion subsidy for constructing low price houses for low income people on subsidised rates.

He said in order to facilitate the exporters, the government had computerised the refund system which would help ensure payment of refunds within 72 hours.

Answering a question, Hafeez Shaikh said that the government was introducing reforms in various institutions and if they performed well, there would be no need for Pakistan to go back to the IMF for another programme.

Replying to another question, the Adviser said during last five months the government had not increased petroleum prices and had reduced the diesel price by over Rs 2 per liter.

He said controlling prices of the commodities was top priority of the government and in that regard an important meeting was going to be held on Friday.

He said the government had also approved a subsidy of Rs 6 billion for the Utility Stores to provide sugar, ghee, pulses, and wheat flour on subsidised rates.

Replying to a query, Hammad Azhar said the government had steered the economy out of crisis, which had now got stabilised.

The economy would soon the enter the next stage of recovery and growth creating more jobs opportunities, he added.

To another question, he said due to import compression of about $5 billion during the first five months, the tax revenue target could not be achieved. However, the FBR had still managed to increase the tax revenues by 17% which was a big achievement, he added. FBR Chairman Shabbar Zaidi said since refunds had now been automated, therefore, there would be no delay in that regard.