Murad calls for interpretation of constitution for more provinces 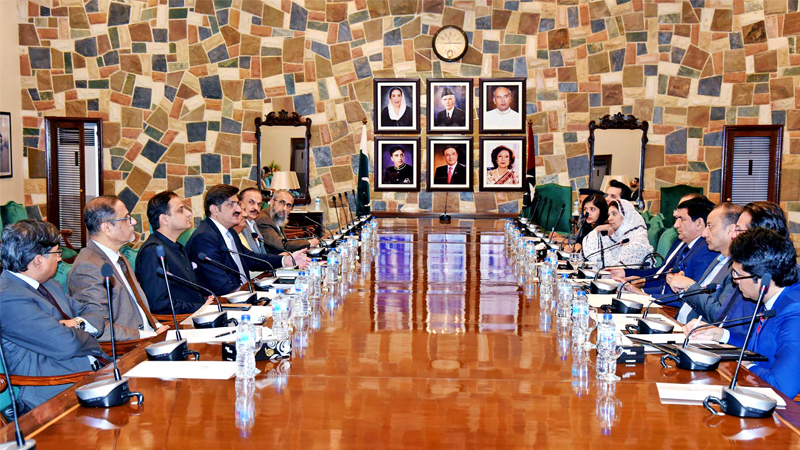 Sindh Chief Minister Syed Murad Ali Shah has said that there was a need to interpret the constitution in terms of creation of new provinces.

“As far as my personal opinion is concerned, the constitution allows modification in the boundaries of a province and there is no clear cut mention of creation of new province.”

The Senate standing Committee discussed three issues with the chief minister and they were creation of new provinces, South Punjab and Hazara and fixation of age of a labour in the light of child labour laws.

The chief minister said that he was not a practicing lawyer but he was of the view that the constitution was needed to be interpreted for creation of new provinces.

“The constitution allows modification of boundaries, now question arises whether the modification [of boundaries] implies creation of new province or it is about resettlement of boundaries between the two or provinces,” he said and added as far as creation of new province was concerned it must be demanded by the concerned provincial assembly with two third majority and then put up the assembly’s request to the federal government for further action.

Advisor law Murtaza Wahab also briefed the committee on the position of the provincial government and said the Punjab assembly has already passed a resolution for creation of South Punjab province and now it was pending in the federal government.

The chief minister said that no demand for a separate province could be entertained until and unless the concerned provincial assembly was not demanding so. He added that the creation of South Punjab has already been demanded by the Punjab assembly and the demand of Hazar province has been made by the KP Assembly.

Talking about fixation of initial age of a labour, the chief minister said that it could be 16 years. He added that the provincial government, in order to discourage child labour has fixed 18 years age for labour it could be made 16 years.

Shah said that federal government was reluctant to convene CCI meetings to discuss and decided CCI matters. He added that Pakistan Railways was a CCI subject but it had never been discussed in the CCI meeting.

He said that the last CCI meeting was held in 13 months ago and now the next meeting has been convened on December 11, 2019. “The provincial government in Sindh is actually the government of opposition but it has never been treated democratically,” he said and added “if the federal government follows the constitution there would be no difference or outstanding issues between the centre and the province.”

Shah quoting Shaheed Zulfikar Ali Bhutto said that as a prime minister he had held a CCI meeting for three days continuously. The PPP government of Asif Ali Zardari used to hold CCI meetings in time and for quite some time Nawaz Sharif as a prime minister held regular meetings but then they became discontinue. But “This PTI government has totally demonstrated irrelevance attitude towards the CCI forum.

Constituencies: The meeting pointed out that the Balochistan province might be given more seat in the national assembly purely based on area. A National Assembly of Balochistan constituency was stretching over 200 miles for was not humanly possible for a candidate to visit.

The chief minister said that the area or distance could not be made a criterion for a national assembly seat. “Yes, the provincial assembly seats can be increased on areas basis which may facilitate the people and the candidate internally,” he said.

Shah said that the creation of Senate as a constitutional body was aimed at giving equal representation to the provinces. Therefore, the criteria of area could not be accepted for national assembly seat.