* Usman Khan, whose family is from AJK in Pakistan, was convicted in 2012 for his part in an al-Qaeda-inspired plot to blow up London Stock Exchange 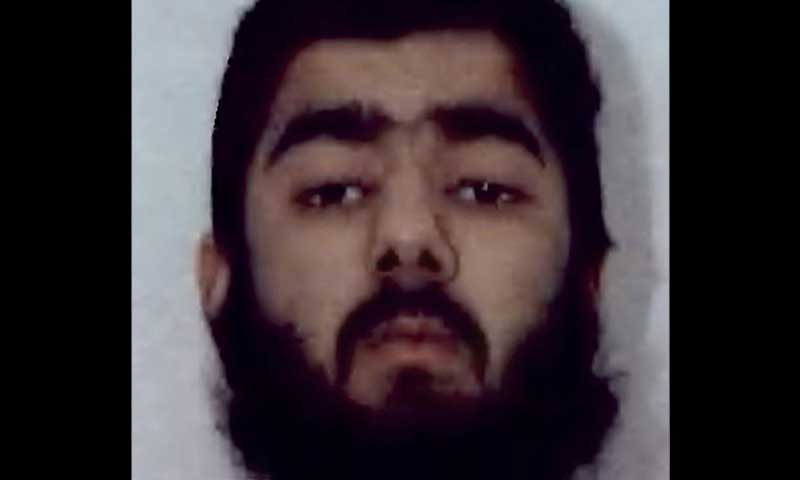 The British government on Saturday vowed a ‘full review’ after a convicted terrorist released early from prison was suspected of stabbing two people to death on London Bridge.

Police shot Usman Khan dead after his suspected assault that seriously injured three other people was broken up by bystanders – one armed with a five-foot narwhal tusk and another a fire extinguisher.

Video footage of the confrontation showed Khan, 28, being challenged by a man wielding the tusk – believed to have been taken from a nearby historic hall – and sprayed with the extinguisher.

Usman Khan, whose family is from Azad Jammu and Kashmir in Pakistan, was convicted in 2012 for his part in an al-Qaeda-inspired plot to blow up the London Stock Exchange. He was released in December 2018 subject to conditions.

“This individual was known to authorities, having been convicted in 2012 for terrorism offenses,” Britain’s top counter-terrorism police officer, Neil Basu, said in a statement. “Clearly, a key line of inquiry now is to establish how he came to carry out this attack.”

Investigators have said they are not actively seeking others in relation to the incident, which recalled a three-man terrorist assault two years ago on London Bridge that killed eight. The latest attack came less than two weeks before Britain’s general election, and politicians temporarily suspended campaigning.

Security Minister Brandon Lewis said the government would check whether sentences were being dealt with ‘in a proper way’ following Friday’s carnage. “After any incident like this, there has to be and always is, a full review and lessons-learned exercise taken forward,” he told BBC Radio. “We have to let the investigation complete itself first, but that will absolutely happen.”

Khan, from Stoke in central England, was handed an indeterminate sentence for public protection in 2012, with at least eight years in prison, along with eight others inspired by Al-Qaeda who had plotted to bomb targets including the London Stock Exchange. They were also found guilty of making longer-term plans including taking part in ‘terrorist training’ in Pakistan. But the sentences of Khan and two co-conspirators were quashed by the Court of Appeal in April 2013 and he received a new 21-year sentence, comprising a maximum custodial term of 16 years.

Police on Saturday were reportedly searching a property in Stafford, in central England, thought to be connected to Khan.

Police believe he began the attack at Fishmonger’s Hall, a historic building said to contain many ancient artefacts on the north side of the bridge. It was hosting an event organised by the University of Cambridge’s criminology institute on prisoner rehabilitation, attended by Khan, who reportedly arrived with two knives and the fake suicide vest. Vice Chancellor Stephen Toope said he was ‘devastated’ that the university’s staff, students and alumni may have been targeted.

The Metropolitan Police appealed for witnesses from the event to come forward.

As the attack moved to London Bridge, a throng of people could be seen in videos grappling with Khan on a pedestrian walkway. Tour guide Stevie Hurst told BBC radio that “everyone was just on top of him trying to bundle him to the ground.

“I saw that the knife was still in his hand so I just put a foot in to try and kick him in the head: we were trying to do as much as we could to try and dislodge the knife,” he said.

One man in a suit and tie – identified by media as a police officer – was later seen carrying a large knife away.

Attention has swiftly turned to how Khan could have been released from prison after serving less than seven years of his sentence.

Inmates are usually released half-way through the type of determinate sentence he was given, and time spent in custody before trial may have been taken into account.

The Parole Board said it had no involvement in his release and that it appeared to have happened automatically as required by law.