A disgusting defamation attempt against Najam Sethi and his family, allegedly started by Zartaj Gul Wazir, Pakistan’s federal minister for climate, has stirred another controversy. Recently a Twitter account posing to be Zartaj Gul took a dig at Najam Sethi by using disgusting remarks against his children, Mira Sethi and Ali Sethi, who are both renowned celebrities themselves.

A few days ago, Mira Sethi, Najam Sethi’s daughter and well-known Pakistani artist, shared pictures of her wedding ceremony on social media. One of the photos in which the bride is surrounded by her brother, father and the groom, is being shared on cyberspace with a fake description, in attempt to malign Najam Sethi. 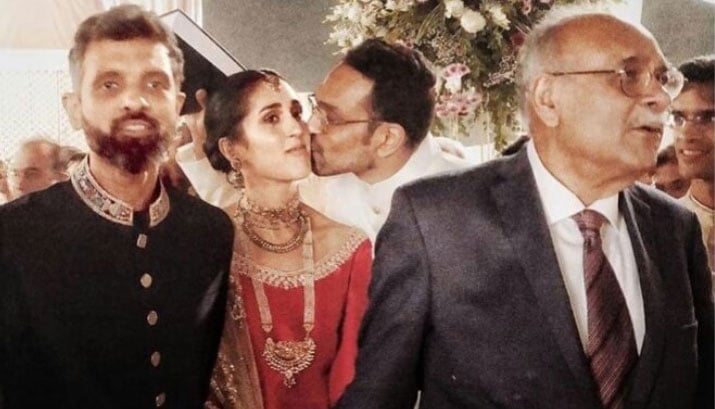 The image being used for propaganda shows Ali Sethi, one of Pakistan’s top singers, pecking his sister’s cheek as the father son duo bids farewell to the bride. However a Twitter account, using Zartaj Gul Wazir’s name, shared the photo declaring Ali Sethi as Mira’s friend and shaming Najam Sethi. The tweet sparked a slew of hate-filled tweets directed at the Sethi siblings, with people spreading fake news to criticize the family.

Zartaj claims that the profile posing to be her is fake.

Check the level of investigative journalist @najamsethi – responding to a FAKE account, and asking me to apologize!🤦‍♀️

He knows I blocked him last year after he tweeted nonsense. The man knows my genuine account.

Najam Sethi, ex-governor Punjab and senior journalist, himself stepped into the debate by schooling the account posing as Minister of State for Climate, Zaratj Gul Wazir, for initiating a rumor without knowing the truth.

In her response, Zartaj, from her ‘real account’ on Twitter, posted a screenshot of the tweet for her followers, and claimed that Sethi had blocked her and actually knew he was tweeting at a fake account.

While both parties are sticking to their stance and are backed by supporters on cyberspace, it must be noted that earlier this year, the minister was massively called out for giving preferential treatment to her sister through officially recommending her to be appointed in National Counter Terrorism Authority (NACTA). Pakistan Muslim League Nawaz (PML-N) even filed a petition with the Election Commission of Pakistan (ECP) seeking to disqualify the minister over abuse of power.

Interestingly, following the controversy, Gul used the alleged “fake account” to vindicate herself. The tweet defending her sister came from the same account that is now been termed as fake by Climate Minister.