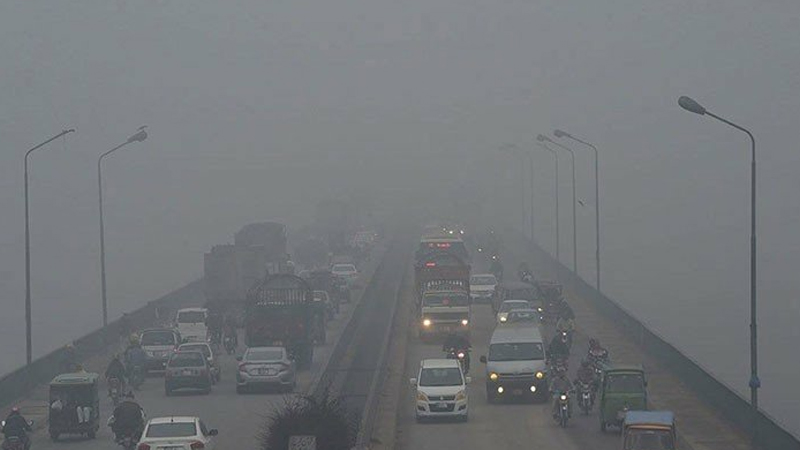 When black smoke from burning rice stubble in nearby India swept into Lahore earlier this month, outraged residents declared an ‘air apocalypse‘ and the provincial government shut down schools.

But even the city’s own thick autumn smog – driven in large part by emissions from polluting vehicles – is becoming a significant threat to health and basic rights, residents and human rights groups warn. “Air pollution … claims tens of thousands of lives, devastates the health of millions, and denies other rights, like the right to education, when children cannot go to school,” said Omar Waraich, South Asia campaigns director for Amnesty International. “This is a human rights crisis,” he said.

This autumn, Lahore’s worsening air quality has led it to overtaking New Delhi on some days as the most polluted city in the world, according to the community-led Pakistan Air Quality Initiative. “Both Lahore and Delhi now have a similar number of days of very unhealthy or hazardous air pollution” said Abid Omar, a founder of the non-profit initiative.

Since October, the city of more than 10 million has been engulfed most days by a smoky, chemical haze that is relieved only briefly when it rains. Warmer air layers above the cooler air at ground level act like a lid that keeps the pollutants close to the ground, according to Pakistan’s Meteorological Department.

Across the city, many residents now wear disposable anti-pollution masks – but they are a poor fit for the faces of vulnerable young children, residents say.

Air quality is so bad that it exceeds even the worst ratings of the World Health Organization, said Attiya Noon, an air quality activist in Lahore and the mother of three young children. Pollution “is now beyond the index” – which means serious consequences for the city’s health, said Noon, a member of the Punjab government’s newly set up Smog Committee.

The committee was hurriedly established earlier this month when air quality levels became so hazardous in Punjab’s capital that schools had to be shut down three times, and social media channels erupted with outrage. The smog group now aims to find both immediate and longer-term ways to reduce pollution.

Mahbina Waheed, a Lahore entrepreneur and another member of the committee, said the creation of the group was one sign the provincial government was taking the problem seriously. “With the last government we felt we were helpless and were spiraling into this abyss with all the focus on building new roads. Now with this new government we can raise our voices and they are heard,” she said.

One of the quick fixes the activists are proposing is to require students to ride buses to school, rather than arriving in many more individual cars. Countries such as China and Iran have used school closures as a way of curbing smog emergencies, Noon noted.

Malik Amin Aslam, advisor to prime minister on climate change, attended early meetings of the Smog Committee and said Lahore needs more high-quality air monitoring stations and actionable data. New Delhi, he said, has 37 official air monitoring stations, while Lahore has just four. The World Bank plans to provide 30 new monitors in Pakistan, including 10 in Lahore, with the aim of having them in place within six months, he said. The biggest driver of the city’s pollution, Aslam said, is vehicles, which contribute 43% of the smog. Burning of crop stubble, steel manufacturing furnaces and brick kilns are other major sources, he said. Omar, of the Pakistan Air Quality Initiative, said mandating the use of cleaner fuels should be a top priority. “While closing schools or low weekend traffic have a marginal impact, our transportation and industrial sectors never sleep,” he said.

Aslam said he will take up fuel standards with the country’s oil ministry and urge them to import higher quality diesel. He said he also planned to introduce vehicle inspection systems in Punjab province in coming months to keep a check on polluting vehicles. Aslam said the World Bank plans to provide $55 million to help Punjab steel and brick plants shift to cleaner technologies, and to help farmers find alternatives to burning crop residues by next year.

The most densely populated and least well-planned cities are the ones with the most serious smog problems, she said – and as people flock to already congested cities Pakistan will see more of air pollution threats. “We need a proper urban policy or else our cities will become unliveable,” she warned.

Waraich, of Amnesty International, said governments in too many smog-hit South Asian cities seem content to ride out of the months of the smog season rather than enforce clear limits on pollutants and punish those responsible for poisoning the air. “The failure to take these steps is a human rights violation,” he said. Waheed, the Smog Committee member, said she had installed an air quality monitor in her home, connected to the Air Visual mobile phone app. The app gives residents an indication of air quality around the city – and has helped back the campaign to clean up Lahore’s air. “Clean air was something we took for granted and now it has become the most cherished commodity,” she said.