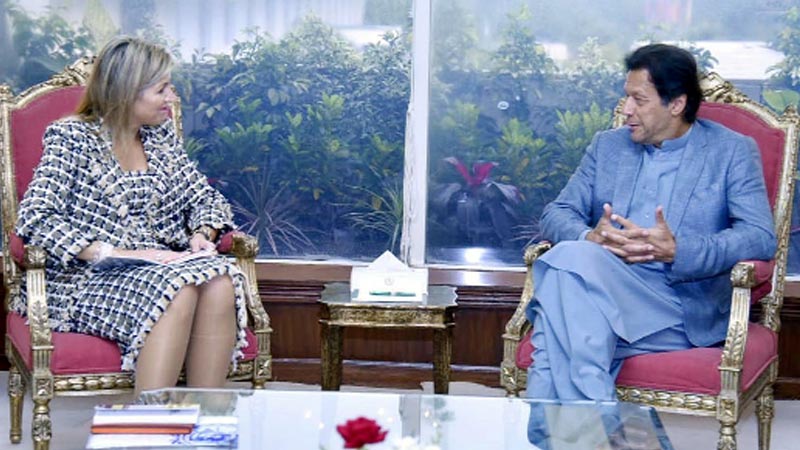 During the launching ceremony, Queen of Netherlands Maxima, in her capacity as the United Nations Secretary-General’s Special Advocate for Inclusive Finance for Development (UNSGSA), Special Assistant to PM on Poverty Alleviation and Social Safety Dr Sania Nishar, Advisor on Finance Abdul Hafeez Shaikh, Governor State Bank of Pakistan Dr Reza Baqir, representatives from the world leading financial partners and officials were present during the ceremony.

Speaking on the occasion, the prime minister said that his government was pursuing all policies to lift poor segments of the society through different poverty alleviation programmes including the Financial Inclusion Strategy under the Ehsas programme.

He said the system of injustice and disparity of the past would not be allowed and there was a need to change the whole mindset.

He said the whole society had to decide, that they could not allow this unfair, unjust system to continue.

The government was focused on how to lift the poor people out of poverty and how to take initiatives for their wellbeing and betterment, he added.

Decrying the elitists system of the past, the prime minister said it created divisions within the society where the facilities of treatment at hospitals or educational institutions for the rich and poor functioned separately.

The prime minister said prior to his political career, he devoted himself to the social work and after coming into power, he was committed to building a social welfare state on the pattern of state of Madina.

For the first time in the history of the world, a real social welfare state was created by the Holy Prophet Muhammad (Peace Be Upon Him) which was based upon the principles of compassion and justice.

In that state, he said, the underprivileged, widows, handicapped, orphans, and destitute were taken care of whereas, pension facility was extended to the people for the first time in the world.

The prime minister said it was his great motivation and he was firm to build a welfare state on those ideal principles.

“As Muslim, we are told in the Holy Quran, that we have to follow the example of our Holy Prophet (PBUH) and hence that was my motivation for coming into politics and to building a welfare state in Pakistan,” he added.

He said the feeling of compassion and caring had been the core ingredients of the Ehsas programme.

The prime minister also lamented the elitists system prevailing throughout the globe, making the rich nations richer and the poor, the poorer.

He referred to the latest report of the one of the UN bodies which said due to such wide discrimination, the 26 odd richest billionaires own as many assets as the 3.8 billion people who make up the poorest half of the planet’s population.

The prime minister said that there was something wrong with the system which created this inequality where some people had so huge pelf at their disposal that they would never be able to spend it even if they get the chance to live for five times.

“On the other hand, you have poverty. I feel that there is greed in the universe where the rich wants to avoid taxes. They have these offshore accounts,” he added.

The prime minister also lauded China for taking 700 million people out of the poverty in the last three decades.

“This has never been done in the human history,” he added.

He also linked the major universal challenges like global warming and the environmental degradation with the greed for amassing wealth.

The prime minister also referred to different poor migrants from various countries risking their lives in boats in their bid to land in the rich countries.

He said in Pakistan, his government would be trying its best to alleviate; not because of securing votes but because it was his belief that it would not be a civilized society where you have such poverty.

The prime minister to make his point further said that in Pakistan, they had three tiers of educational system, ie; privileged education for the elite class, government educational system and the maddresah system for the poor.

The prime minster also lauded Dr. Sania Nishtar for her devotion and hard work to setup various initiatives under Ehsaas.

Queen of Netherlands Maxima, the United Nations Secretary-General’s Special Advocate for Inclusive Finance for Development (UNSGSA), speaking on the occasion, said that financial inclusion meant to provide sustenance to the needy and the poor, job opportunities, education to the children and focused mainly on overall economic stability of the country.

She stressed upon encouraging the womenfolk especially those from the rural areas to be familiar with the use of technology for the financial inclusion which was negligible when compared to the males.

Queen Maxima said that the beneficiaries of the initiative also required connectivity through smart phones.

She also termed her stay in Pakistan as wonderful, thanking the government for warmly hosting her and her delegation.

Special Assistant to PM on Poverty Alleviation and Social Safety Dr Sania Nishar in her detailed overview of the initiative said the financial inclusion under Ehsaas included ‘Ehsaas-Kifalat: One Woman One Bank Account Policy’.

Under this policy, steps were taken to reform the BISP cash-transfer scheme, enabling digital and financial inclusion through a “One Woman, One Bank Account”.

The programme would not be limited to cash transfers but would also seek to ensure access, affordability and usage of full spectrum of financial services including payments, savings, credit, and insurance products.

It would enable the government to enforce the minimum wage, providing further protection for informal sector workers, she added.

Besides, under access to credit initiative, in July, the National Poverty Graduation Initiative was launched.

It combined elements of social mobilization, livelihoods development, with financial inclusion (interest free loans, asset transfers and vocational training) to move households out of extreme poverty and into sustainable graduation.