* PM says PML-N supremo, who doctors said could die at any minute if he did not go abroad for treatment, suddenly recovered and looked perfectly fine as he got a glimpse of London-bound air ambulance 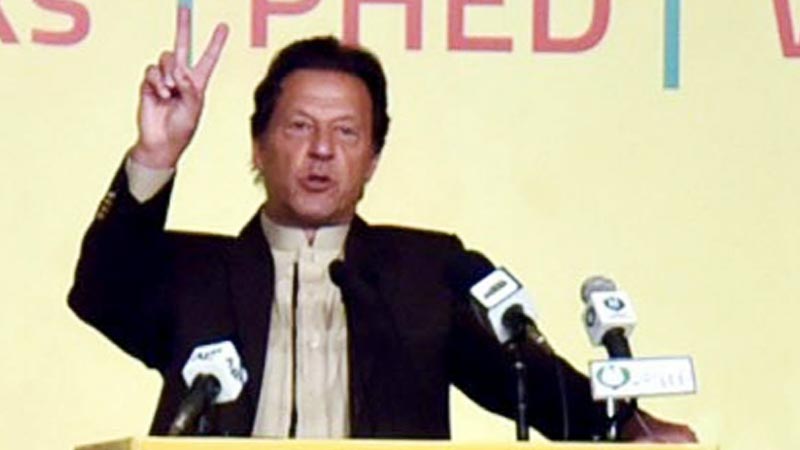 Prime Minister Imran Khan Friday took a sly dig at former prime minister Nawaz Sharif, saying the ailing PML-N supremo, who doctors said could die at any minute if he did not go abroad for treatment, suddenly recovered and looked perfectly fine as he got a glimpse of the London-bound air ambulance.

“Contrary to his medical reports depicting the critical conditions of his heart, kidney and platelets, Nawaz Sharif’s condition looked to be improved all of a sudden as he boarded the plane,” he said while addressing a gathering in Mianwali. “I was stunned when I saw him boarding the air ambulance. The medical report said he could die any moment and had to be taken abroad for treatment. It said he cannot be cured in Pakistan. But I wonder whether it was by looking at the plane that his health suddenly improved,” he said. “May be it was the luxury plane or the air of London that did the trick,” he remarked.

Rubbishing the opposition’s propaganda, the prime minister said the government has overcome the current account and fiscal deficits that had been left behind by the previous government. He said the inflation has increased owing to the devaluation of the local currency caused by the deficit the incumbent government had inherited. Expressing the pride in his economic team, he said the business is growing, stock market is improving, and local and foreign investment is pouring in the country.

The prime minister said the parties, which recently held a march in Islamabad, have never been concerned about the country, rather they are worried about the fate of their own politics and their own future, besides being frightened of corruption cases. He said such mafias always resist change in the country and had convinced the previous rulers to give up their cases in return of the protection of his seat. “But Imran Khan is not here to protect his seat, rather to bring about change. Change will not occur unless these mafias are defeated. Otherwise, there is no future of the country,” he remarked.

He said the rupee was devalued because of money laundering through Hundi or Hawala, and questioned as to why the members of the Sharif family had absconded and not facing the courts. He told the gathering that being challenged by the opposition, he produced before the court 60 documents in 10 months, proving all money trail of his property in London as well as residence in Bani Gala, contrary to the opposition party which furnished fake documents. He said Bilawal Bhutto and Shahbaz Sharif joined the JUI-F-led march just to pressure him to enjoy the smooth sailing. “Until I am live, I will not do such a treachery with my country by making a deal with them. No one will make such treachery. The youth will become my team and I will face them,” the prime minister remarked.

Earlier, the prime minister broke ground for Mother and Child Hospital, bulk water supply scheme for Khattak belt and Isa Khel, restoration and widening of urban and rural roads in Mianwali, dualization of Sargodha-Mianwali Road, restoration of water supply scheme in Mianwali, and upgradation of existing and construction of new schools in Mianwali. He also launched work on the University of Mianwali that will cost Rs 300 million and comprise 25 teaching departments, library, auditorium, sports complex, four student hostels, two faculty hostels and residences.