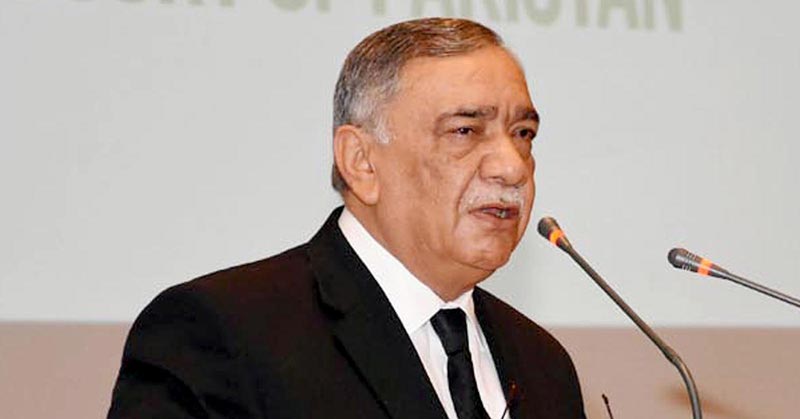 “Don’t give us this taunt referring to ‘the powerful’. Nobody is powerful before us [the judiciary] other than the law itself,” the chief justice said, referring to former prime minister Nawaz Sharif’s foreign travel on medical grounds. “The particular case that the respected prime minister referred to, I do not want to comment on that. But he [PM Imran] should know that they themselves allowed somebody [Nawaz Sharif] to go abroad. The debate in the High Court was only over modalities. Please be careful (with statements),” he said while addressing the inauguration ceremony of a mobile app, call centre, complete video link facility in five courtrooms of the Supreme Court, research centre and an enhanced website to facilitate litigants and the lawyers.

A day ago, the prime minister had said in an indirect reference to Nawaz’s travel to London that there are separate laws for the weak and powerful in the country, requesting the CJP to help restore people’s confidence in the country’s judicial system.

The CJP said the prime minister should refrain from issuing such statements as he is the chief executive of the government. “For us, no one is either big or small or powerful. We have convicted one prime minister and disqualified another. A former chief of army staff’s case is about to be decided soon. Are these examples not in front of you? For us, only the law is powerful,” he said. “Whatever social segments criticise our judges should be a little cautious because they (judges) are working hard day and night,” Chief Justice Khosa said. “Encourage them rather than criticising them,” he added.

The chief justice said the only powerful element in the eyes of the judiciary is the law, and not any individual. “A silent revolution has come in our judiciary,” Justice Khosa said, while acknowledging that no institution is ‘perfect’.

While appreciating Prime Minister Imran Khan’s offer to allocate additional resources for improvement of the judicial system, the chief justice said efforts are being made to expedite disposal of cases. The measures like provision of extra resources to the judiciary will go a long way in improving matters, he said.

The CJP referring to the PM’s statements about the functioning of the judicial system, said, “Everyone should know that the judges are working hard but no one is perfect.” He said there is a perception that courts are hearing the cases of the powerful people while cases of the weak are not tried. He said there are around 3,100 judges and judicial magistrates in the whole country who have decided 3.6 million cases. All of the litigants were not powerful but most of them were poor and weaker, which shows that all are equal in the eyes of law,” he said.

The chief justice said the courts decide cases on merit without fear or favour and that the judges burn midnight oil by working under the existing resources instead of demanding more or amendments in the laws.

The CJP said the Supreme Court has decided all the criminal appeals, except a few, pending for 25 years. The establishment of model trial courts across the country has produced marvellous results and reduced the backlog of murder, narcotics, magistrate trials and civil appeals, including rent and family cases, he added.

Earlier addressing the ceremony, Justice Mushir Alam said launching of IT-based applications is a litigant-friendly initiative towards transformation of the Supreme Court of Pakistan through information communication technology (ICT) so as to make the judicial system more responsive to the needs of people approaching the court for redressal of their grievances. The applications will benefit all the stakeholders of justice sector, including litigants, lawyers, general public, media and academia, he said, and added that it will help them track the cases and keep them abreast of the latest updates of the cases in the Supreme Court.