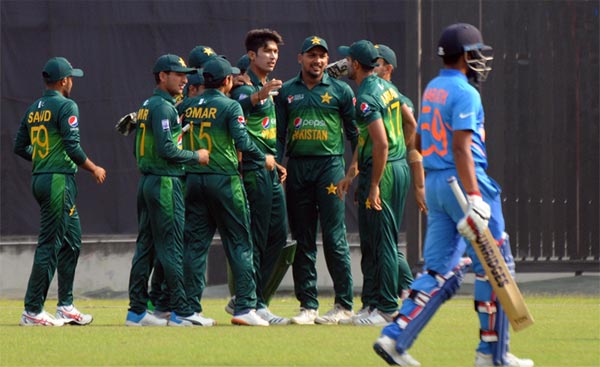 Pakistan beat India by three runs in a thrilling end to the first semi-final of ACC Emerging Teams Asia Cup 2019 played at the Sher-e-Bangla National Stadium in Mirpur on Wednesday. India managed 264 for the loss of eight wickets in 50 overs after Pakistan scored 267 for seven in 50 overs. Pakistan will face Afghanistan or Bangladesh in the final of the tournament to be played on 23 November. India at one point were cruising towards victory requiring 57 runs with seven wickets in hand in13 overs, but back to back wickets of Yash Rathod (13) and Armaan Jaffer (46) on the score of 211 put breaks to the batting line. Sanvir Singh top-scored with a 90-ball 76 which included five fours and a six.

Right-arm pacer Amad Butt bowled superbly in the death overs, he gave away only four runs in the 50th over of India’s innings and ended-up with match figures of one for 43 in 10 overs. Mohammad Hasnain and Saif Badar chipped in with two wickets apiece for 61 and 57 runs, respectively. Batting first after winning the toss, openers Haider Ali (43 off 60 balls) and Omair Bin Yousuf (66 off 97 balls) provided a solid start to the innings and added 90 for the first-wicket. Haider’s innings included five fours and a six, while Omair hit three fours and two sixes. After the departure of the openers, Rohail Nazir coming to bat at number three got off to a start, but fell after scoring 35 off 41 balls, hitting two fours and a six. Saif Badar down the order scored an unbeaten 48-ball 47 which included a four and a six. For India, Hrithik Shokeen, Saurabh Dubey and Shivam Mavi took two wickets apiece.