NRO-type concessions for the corrupt out of question: NAB 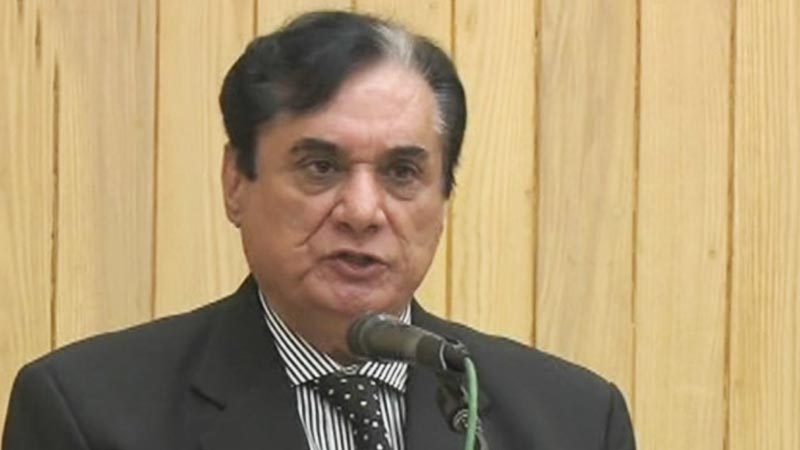 National Accountability Bureau (NAB) Chairman Justice (r) Javed Iqbal Tuesday said while multiple common people share a single hospital bed in the country, there are others who are going to London or US for treatment even ‘if they catch a cold’.

“Are the rest not humans […] God has created everyone equal,” he said, while speaking at an award distribution ceremony among the outstanding officers of the NAB. He said no threat, criticism or browbeating can deter him from performing his national duty of eradication of corruption and accountability process will continue unabated. He said he will never compromise on his principles and accountability and there will be no deal or NRO-type concessions to corruption suspects. He said he has no enmity or friendship or personal grudge against anyone and that bureau will continue to work in accordance with law and will take action on corruption complaints.

Strongly denying propaganda of some vested elements, he said no mega corruption case has been reported since year 2017. He said the politicians on NAB radar criticise the anti-graft watchdog. He urged the politicians to utilise the option of plea bargain and go to the place of their choice.

He lamented that the bureau is not being allowed to work in a province (Sindh), adding whenever NAB initiates a case, a provincial minister appear on TV screens and start criticizing the NAB blaming it for discrimination. “If the health budget of a province is in billions of rupees, and vaccine of dog bite is not available, then question would be raised,” he said.

He said the NAB has the right to raise question over the authenticity of a project when over million rupees will be spent on a Rs 5,000 project. The nation is indebted to over Rs 100 billion and NAB will ask questions as to where the amount had been spent and that too without any improvement in lot of the country.

He said from now onwards, the focus of accountability is being shifted from the people who enjoyed over three decades of rule to the persons who are ruling the country since last 12 to 14 months.

Commenting about media criticism over NAB for not taking up Bus Rapid Transit (BRT) Peshawar case, he said the watchdog is trying to vacate the stay order granted by the apex court in the case to take the cases to logical conclusion. NAB cannot proceed ahead due to Lahore High Court (LHC’s) stay orders in Muslim Commercial Bank (MCB) privatization case, he added. “The investigations of white collar crime are extremely difficult as the crime is committed in Lahore and property is revealed is London. The corruption money travels from a country to several countries and lands in another country,” he said.

The chairman said the bureau’s performance must not be judged on the basis of statements of the people who are on NAB’s radar. The media should confirm a report before publishing or broadcasting it, he said. “Media had alleged last day that NAB Rawalpindi has summoned the mother of former chief minister Khyber Pakhtunkhwa Akram Khan Durrani. On confirmation, the news proved fake. NAB has the policy to avoid the arrest of a women suspect but only send questionnaire to her,” he added.

He urged the officers to ensure protecting self-esteem of the suspects. “The concept of handcuffing a suspect has already ended. After arrest, a culprit goes into judicial custody and NAB has no role over his or her plight,” he added.

Brushing aside fears of bureaucracy, he said out of over 1,200 pending references not more than 10 references are against the bureaucrats. “However, the characters like Mushtaq Raisani and Liaquat Qaimkhani do exist in bureaucracy where millions of rupees are recovered from their homes. Even State Bank’s currency counting machines were unable to count the recovered currency from their homes,” he said.

He said 1,270 references involving Rs 940 billion are still pending in various accountability courts and only 25 judges are available for hearing the references. He urged enhancing the number of judges by at least 50 for prompt disposal of corruption references.