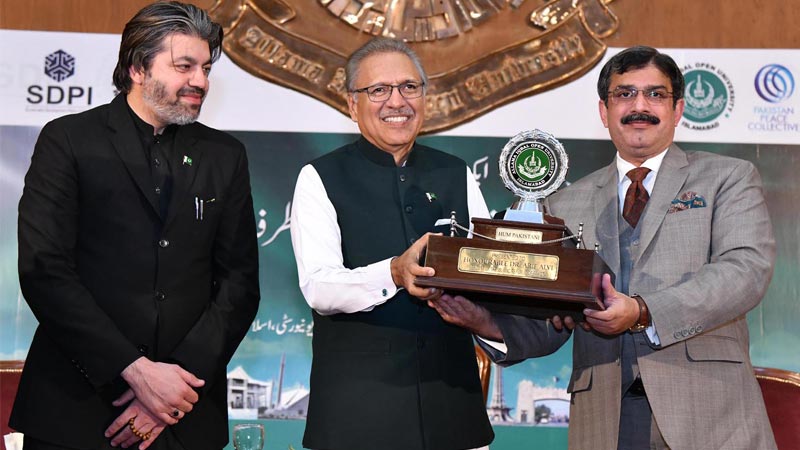 President Dr Arif Alvi on Tuesday stressed that a holistic approach is needed to achieve the goals of social reconstruction in Pakistan.

Chairing the opening session of a nationwide training titled ‘Hum Pakistani’ at the Allama Iqbal Open University, the president said the spirit of forbearance and co-existence must be upheld for collective well-being of the society. Laying greater focus on reconstruction of society and national integration through community-based activities, he underlined that the universities should offer a helping hand in policy making at the national level by fostering intellectual discourse.

The president said Pakistani nation has become matured and is at the tipping point of progress and development. He said during stand-off with India, Pakistan showed restraint and promoted peace but on the other hand we a war hysteria was observed in India.

He said Pakistan has witnessed a political change also and respect of the country has increased. He said Prime Minister Imran Khan during his visit to the US presented national narrative and negated the notion of Islamic terrorism before the world. He said Pakistan is moving towards the ideal state of Madina. He said Islamic history is full of examples for interfaith harmony.

‘Hum Pakistani’ is a project of Allama Iqbal Open University under the banner of national initiative ‘Paigham-e-Pakistan’. The university has already organised two-day training of trainers on 10 main themes of Hum Pakistani: interfaith harmony and religious tolerance; female education and women rights; developing patriotism and love for country; issues related to education and health; promotion of local handicrafts; environment and water protection, promotion of sports, hatred for the crime not the criminal; dealing with land disputes; and respect for the difference of opinion. The Sustainable Development Policy Institute and Pakistan Peace Collective are supporting the initiative in terms of providing expertise.

On the occasion, Minister for Federal Education and Professional Training Shafqat Mehmood recommended sharing success stories of eminent Pakistani professionals, practitioners and scholars with the local community. He stressed the need to popularise the country’s monolith ‘Hum Pakistani’ narrative to rebuild society in a positive direction and address the socio-economic challenges faced by the country.

Speaking about the government’s policy of creating a society based on justice and social equity, he said the government is gradually enforcing a unified education system in the country so that the rich and the poor can equally benefit from the national resources and have a better place in the society. He also called for promoting the spirit of patriotism and love for the country, particularly amongst the youth, so that national challenges can be addressed successfully.

Minister of State for Parliamentary Affairs Ali Muhammad Khan and Islamic Ideology Council Chairman Dr Qibla Ayaz appreciated the efforts of AIOU in promoting the vision of Paigham-e-Pakistan, which has been prepared in the light of the fundamental teachings of the Holy Qur’an and Sunnah and the 1973 Constitution.

In his speech, AIOU Vice Chancellor Dr Zia ul Qayum reiterated the commitment of the university in strengthening national solidarity.

Later, the participants of training of trainers and resource persons were awarded with training certificates.