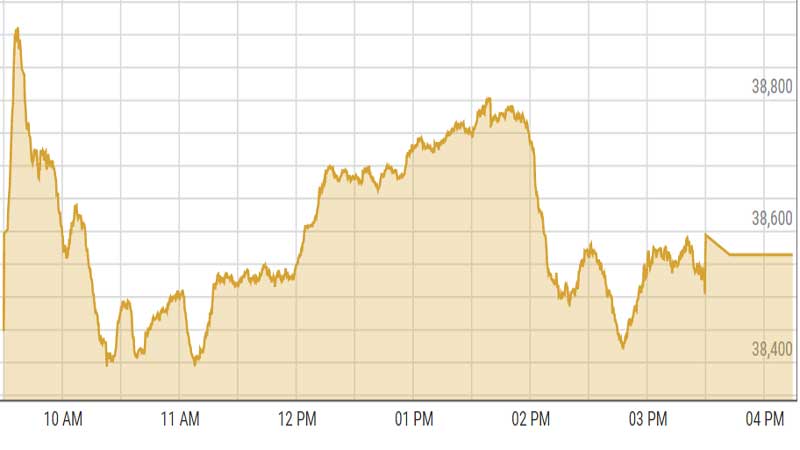 The KSE 100 index witnessed a positive start to the trading session as it opened 313 points higher than the previous day’s closing point as the bourse recorded another session in green, the Index traded in a range of 518.82 points or 1.35 per cent of the previous close, showing an intraday high of 38,910.71 and a low of 38,391.89. However, later in the session, investors chose to book profits. During the session, the index registered an increase of 152 points (0.4%) and closed at 38,564.

Sectors propping up the index were power generation & distribution with, oil & gas marketing companies, investment banks, pharmaceuticals and textile composite. The most points taken off the index were by Pakistan Tobacco Company Limited which stripped the index of 34 points followed by ENGRO with 27 points, United Bank Limited with 24 points, Bank Al Habib Limited with 17 points and Pakistan Oilfields Limited with 11 points.

Meanwhile, State Bank of Pakistan Governor Reza Baqir on Monday said the economy has begun to show signs of improvement, adding that inflation would start easing soon as a result of the new measures. Addressing the business community at Karachi Chamber of Commerce and Industry (KCCI), Baqir said the SBP has always made efforts to facilitate trade and industry as better business environment helps strengthen the economy.

Responding to KCCI’s demand for reducing the policy rates, he assured that the SBP would go for the same as soon as the inflation rate starts coming down.