Circular debt to be eliminated by December 2020: Dr. Hafeez Shaikh

Advisor to the Prime Minister on Finance & Revenue Dr. Hafeez Shaikh met with leading anchorpersons of electronic media and briefed them about the economic performance of the government in the first quarter of the current Fiscal Year-2019-20.

The Advisor to the Prime Minister on Finance & Revenue informed them about the precarious economic situation left by the previous government and the challenges the present government had to take more than a year ago. He highlighted that bilateral agreements with the friendly countries and the assistance provided by IMF helped to ease pressure on the economy. 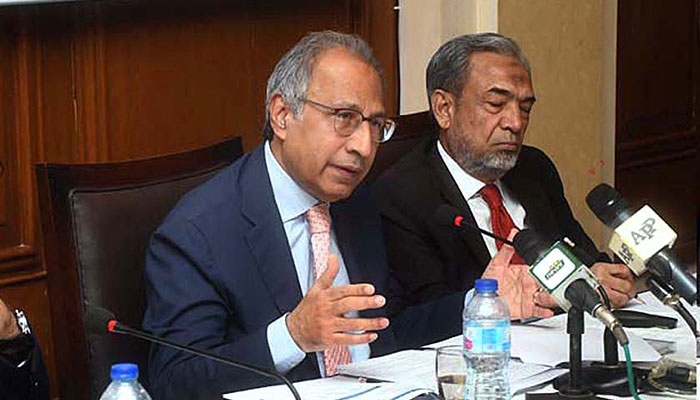 The Advisor to the PM on Finance and Revenue Dr. Hafeez Shaikh added that the IMF team in its first review has given a very satisfactory report on the economic performance of the government in the first quarter of the current Fiscal Year 2019-20. The media persons were informed that the government will utilize all its energies to increase the revenue and decrease the expenditures in the remaining quarters of the current fiscal year.

The media persons were further informed that the present government is strengthening the economic institutions of the country to get durable economic results.  Notably, the trade deficit has decreased by 33.5% in the first three months of the current fiscal year.

The government is also trying to generate above target non tax revenue in the ongoing fiscal year. The Advisor to PM on Finance and Revenue reiterated the resolve of the government to eliminate circular debt by December 2020. He informed that coming months will further strengthen the economy and soon the country will achieve economic prosperity. After the Advisor’s discourage the senior anchors asked questions related to fiscal, monitory and external accounts. Inflation, exports, investment portfolios, State Bank autonomy, Agriculture and taxation system were also discussed.