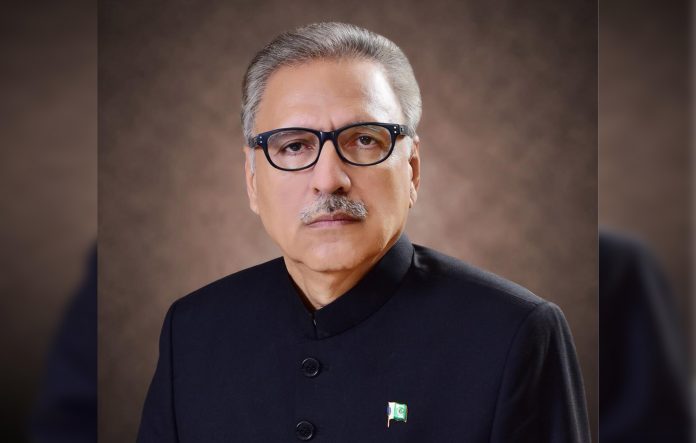 President Arif Alvi on Monday termed the remarks of a former Indian army official advocating the rape of Kashmiri women as “disgraceful”.

In a tweet, the president condemned the comments made by Major General (r) SP Sinha on a TV show on Hindi news channel TV9 Bharatvarsh, in India, in which he can be heard saying, “Death in return for death, rape in return for rape.”

Alvi termed the remarks as “disgraceful” and added, “Imagine the fate of women in Indian occupied Kashmir where such men wield power with total impunity.”

The president’s reaction comes a day after a clip of the former Indian army official went viral on social media with many criticising him for the hateful remarks.

According to Scroll.in, Sinha had asked for “death in return for death, and rape in return for rape” in order to “avenge the atrocities against Kashmiri Pandits during their exodus from Kashmir in 1990”.

In the clip, the moderator is seen trying to calm down the heated exchange, which involved the panellists and audience members. During the two-minute video, another panellist says he is walking out over Sinha’s remark.

The former Indian army officer – who in the clip is seen sticking by his reprehensible remarks – has received strong backlash at home as well.

An activist, Saket Gokhale, said that he had written to the Indian army chief and India’s ministry of defence demanding that the army “clarify” its position on Sinha’s remarks and to initiate proceedings to strip his rank and freeze his pension.

Elsa Marie, a social entrepreneur, said that the former army officer was inciting rape and murder on live television.

“Watch the guy sitting quietly next to him. That man represents majority of India who are silent bystanders. #shame,” she tweeted.

According to First Post, former director general of military operations, Lt Gen Vinod Bhatia (r), said, “Insensitive and unfortunate. I am sure he has not been anywhere near the frontline or in contact in CT ops ever […] Extreme views of an individual who is known to make obnoxious statements for momentary fame.”

For years, human rights groups have accused Indian troops of intimidating and controlling the population of occupied Kashmir with physical and sexual abuse and unjustified arrests. Indian government officials deny this, calling the allegations “propaganda”.

Abuses alleged by rights groups since 1989 have included rape, sodomy, waterboarding, electric shocks to the genitals, burns and sleep deprivation.

The United Nations last year called for an independent international investigation into allegations of rights violations like rape, torture and extrajudicial killings in Kashmir.