CPEC to help expand industrial base, exports of Pakistan: Khusro 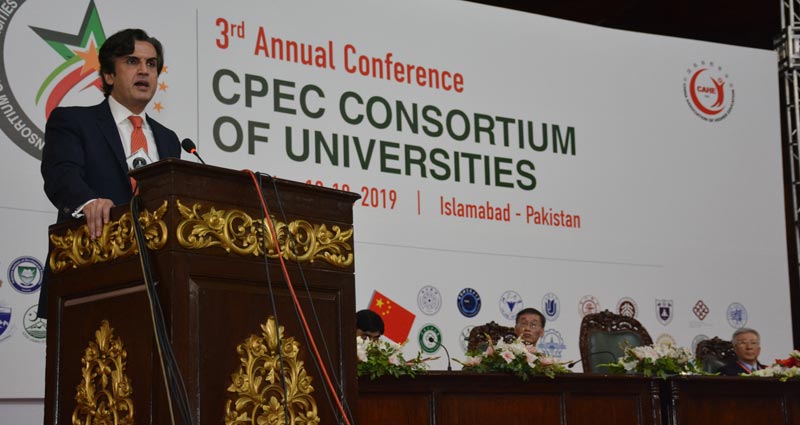 Minister for Planning, Development and Reform Makhdum Khusro Bakhtyar on Monday said that under China Pakistan Economic Corridor’s (CPEC) next phase, the industrial base of the country would be expanded which would help in increasing the country’s exports.

The minister said that China has total trade volume worth $4000 billion with the world; however Pakistan has only $ 80 billion of trade with global market. He was addressing the 3rd annual, two-day conference on CPEC consortium of universities here.

The Chinese government has offered 20000 scholarships for Pakistani students to avail chances of higher education besides financing to build 1000 small schools in different areas of the country.

“We have broaden the cooperation through CPEC, in areas of Socio- Economic Development, agriculture, industries, infrastructure, energy and people to people contact through the universities for enhancing the multilateral relations between the two countries,” he said.

Khusro Bakhtyar said that diagnostics study through concrete research is required for evaluating the different potential sector to harmonize the socio- economic development of the both sides.

He said that academia and industrial sector link would be necessary for filling gaps and connecting the both side to shape the future economic growth.

The minister said that China had decided to invest $ 10 billion investment in oil and gas sector and $ 4billion in local steel sector through CPEC projects. He said $ 9 billion project was also approved for railway line from Peshawar to Karachi for providing better transport facilities to the people.

He added that the government had established CPEC Authority which would work as a one window for all CPEC related issues so that “we can fasten the pace of the projects and remove all bottlenecks for efficient implementation of the projects”.

About CPEC, he said that it will be a gateway for progress and prosperity for a bright future. “2019 is a significant year for China Pakistan Economic Corridor as several significant milestones were achieved or would be achieved by the end of the year,” he added.

The recent visits of Prime Minister Imran Khan and his interaction with Chinese leadership, he said, had in true sense, broadened and enhanced the scope of future cooperation in diverse fields of agriculture, industrial and socio-economic development.

He said that in the 9th JCC, China and Pakistan had decided to extend industrial, agriculture and infrastructural cooperation to initiate different projects in those areas.

While addressing the conference, Ambassador of China to Pakistan, Yao Jing said that Universities Consortium on CPEC would play vital role for the completion of this mega project, adding that 9th JCC of CPEC was held in Islamabad.

He said that CPEC provides platform for cooperation to connect the society, institution and people of the both sides. Academia and universities to play roll in cooperation and transfer of the technology in both sides.