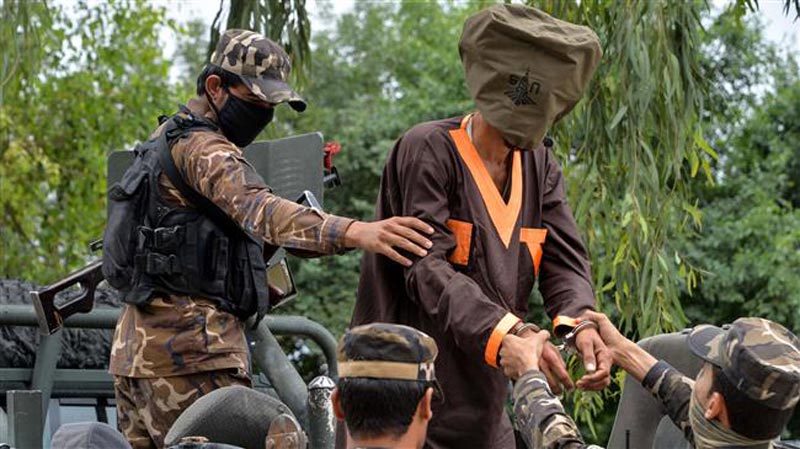 Afghan Taliban on Sunday claimed that they have inflicted “major defeat” on the Daesh militias in eastern Nangarhar province and most areas have been cleared, while the remaining are under pursuit. Parts of Nangarhar had been under the Daesh control and influence for years and hundreds of their militants have surrendered to the authorities in recent days.

The Taliban earlier claimed that the Afghan forces rescue Daesh militants whenever Taliban launch operations against the group, which the Taliban spokesman Zabihullah Mujahid called as a “corrupt group of our times that only considers its own followers as Muslims and excommunicates nearly the entire Muslim Ummah akin to their Khawarij predecessors.”

“This group (Daesh) has caused heavy setbacks to Muslims movements throughout the world, killed hundreds of thousands of Muslims, bombed their bazaars, mosques, educational facilities, shrines and public gatherings and focused all its energies towards Muslim slaughter,” the Taliban spokesman said in a statement.

Afghan officials said on Friday that a group of 139 Daesh members surrendered to the authorities, taking the number of surrendered militants and their families to 600 in two weeks.

Ashiqullah, an Afghan official in Achin district, said in reported comments that 110 women and children were among the surrendered people, including several Pakistanis from Khyber Pakhtunkhwa province. The Taliban spokesman issued a detailed statement on Sunday to claim clearing areas from the Daesh fighters, some of the areas had previously been under the Taliban control.

“This corrupt group sought to ignite the fire of hatred in Afghanistan as in the rest of the Muslim world, and [its members] were proliferated, supported and equipped by the invaders and its stooge regime with the aim of tarnishing the image of the ongoing sacred Jihad against occupation, slaughtering Muslims, weakening Mujahideen and fueling the fire of sectarianism,” Mujahid said.

He said the Taliban as an obligation had launched operations against this “corrupt group” from the very onset, adding that in this series, the Taliban began decisive and large-scale anti-Daesh operations in Nangarhar province on September 20, 2019.

The operations started from Sherzad up to Achin, covering all 7 districts of Nangarhar where Daesh was active, resulting in all the areas cleared of Daesh militias.

“These decisive operations resulted in the death of 193 Daesh elements, including key commanders, while 130 others were wounded… Hundreds of units of heavy and light weaponry and a huge amount of ammunition, horses, mules, vehicles and motorbikes seized,” the Taliban spokesman claimed.

He said 859 Daesh members accompanied by women and children that had taken Takhto area of Achin district as their last stand joined up with the Kabul administration.

“The Islamic Emirate dealt a heavy blow to Daesh group in Nangarhar province and rescued the oppressed people of Nangarhar from this scourge,” the Taliban spokesman said.

From the time the Daesh scourge reared its head in Afghanistan, the Taliban launched efforts for its eradication and over the course of the last five years, they were systematically uprooted from Helmand, Zabul, Paktika, Ghor, Jowzjan and now Nangarhar provinces, and the nation shielded from its corruption.

The anti-Daesh operations were launched by the Taliban as the American invaders and the military and intelligence organs of the Kabul administration strongly backed Daesh, bombed positions of the Taliban in support, aided Daesh militias with weapons and equipment and sent their aircrafts and helicopters on rescue missions during critical times and sieges. Daesh elements that have taken refuge in mountainous areas of Nangarhar province are under the Taliban pursuit as clearance operations continue, Mujahid said.