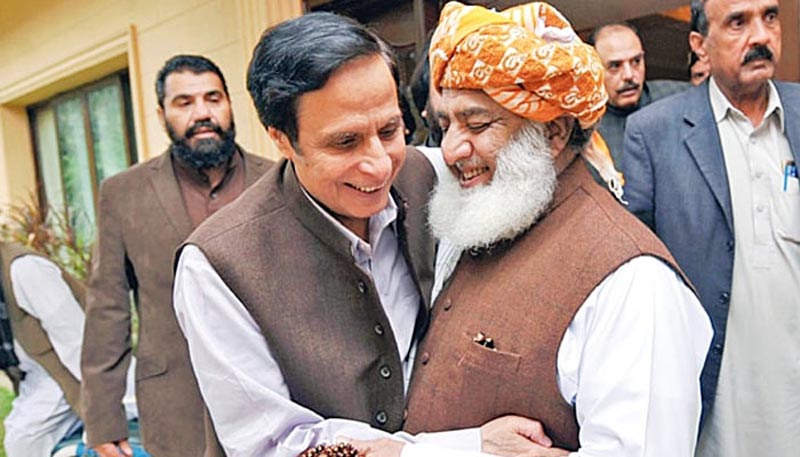 Jamiat Ulema-e-Islam-Fazl (JUI-F) chief Maulana Fazlur Rehman rejected the impression that a deal had been struck between him and the government, saying that the Pakistan Muslim League-Quaid was no longer an ally of the government.

The JUI-F chief was speaking to Saleem Safi in a talk show, where he said that the PML-Q wasn’t an ally of the government anymore.

“Pervaiz Elahi was convinced regarding our stance when he left after meeting me,” he said. “No deal between us and the government was reached either through Elahi or someone else.”

Fazl said that Elahi had spoken from his point of view when he said that an understanding had been reached between the government and him.

In response to a question, Fazl said that the JUI-F workers would not go home without the prime minister’s resignation.

“By next year, Imran Khan will not be the prime minister,” he said. “How that will happen, I can’t let you know. But we will not go home without his resignation.”

Fazl rejected the impression that the Azadi March sit-in had failed. He said that Plan B of the sit-in was in place and that more pressure would be put on the government.

“We have moved from one dharna to several across the country,” he said.

The JUI-F chief said that a new government would be in place by January next year. He said that he was aware of the dangers that such movements caused.

“I’m a democratic person, I know the dangers that such movements bring with them,” he said.

Fazl said that he had told Elahi clearly that his only target was the end of this ‘unlawful government’.

The JUI-F chief said that he wanted to create a political atmosphere. He said that this was necessary in politics so that “other people recognised you”.

“I was creating a political atmosphere. You can’t expect me to put a gun to someone’s head and tell him to resign,” he added.

Fazl said that he was satisfied with the strategy he had in place to pressurise the government and claimed that Prime Minister Imran Khan was not in a relaxed state of mind.

On the other hand, Pervaiz Elahi said that no conspiracy was being hatched to create differences among the government’s allies, and those [if] doing so would fail. He said in a statement issued on Sunday that this party had always “talked right” in view of political realities, and had also played a role during the sit-ins to prevent a clash.

He said that to save the country from political chaos, the PML-Q had contacted Maulana Fazlur Rehman during the sit-in, which proved right and credit for maintenance of peace and order in the sit-ins “goes to Prime Minister Imran Khan and Interior Minister Ijaz Shah”.

Addressing the participants of a sit-in in Ghotki, he said under the Plan C, workers would be “handcuffed” and they “will have to go to jail”.