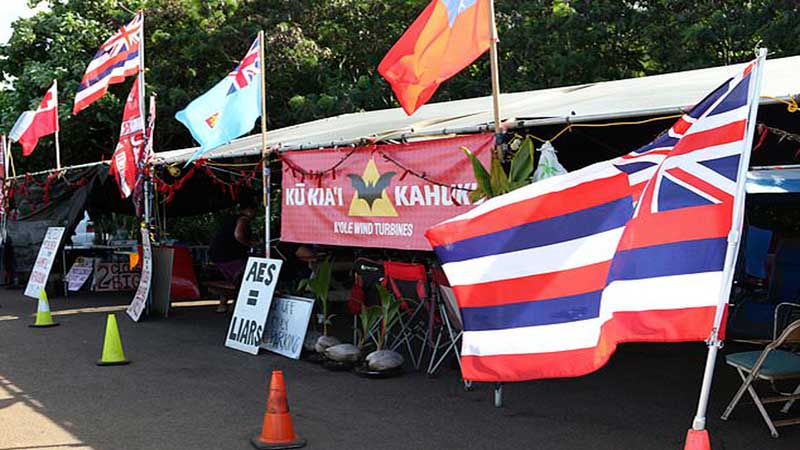 Flapping Hawaiian flags adorn a large canopy on the easement of a highway that winds along Oahu´s famed North Shore.

Under the tent, protesters come and go. Some of them keep guard overnight, and some stop by to wave at cars honking in support or to drop off supplies in a makeshift kitchen area stocked with bottled water, instant noodles and canned meat. On cots and on beach chairs, they are discussing strategies and reminding supporters to maintain a philosophy of peace and nonviolence known in Hawaiian as kapu aloha.

They are at the site trying to prevent the construction of eight wind turbines, each taller than downtown Honolulu´s tallest skyscraper.

The ongoing protest by mostly Native Hawaiians stalling construction of a $1.4 billion telescope on the Big Island has inspired protests on Oahu – the state´s most populous island – to block the turbines and the redevelopment of a beach park.

Since July, protesters who call themselves kiai, or guardians in Hawaiian, have gathered on Mauna Kea, Hawaii´s tallest mountain, to keep telescope construction crews away. Dozens have been arrested.

Borrowing the civil disobedience methods of the protesters against the telescope, opponents try to block convoys delivering turbine parts to the Kahuku wind farm site. Police have made more than 160 arrests since October.

Hundreds gathered at a storage yard where an equipment convoy began late Thursday, leading to the arrests of 26 people.

Protesters were rowdier than usual Thursday, and their actions – including throwing rocks and punching an officer on the side of his head – weren´t in line with kapu aloha, said Honolulu Police Deputy Chief John McCarthy.

Kamalani Keli`ikuli, a spokeswoman for an anti-turbine group, disputed McCarthy´s characterization and said it was police who behaved aggressively. Police asked anyone with evidence of misconduct to file a report.

“Mauna Kea has emboldened our people to rise up in ways that we have never seen before,” said Hinaleimoana Wong, a Native Hawaiian community leader who has been active in the fight against the telescope. “This is an indication that there will be much more greater vigilance in the community when there´s a potential project on the horizon.”

Native Hawaiians have a long tradition of protest that dates back to demonstrations against the annexation of Hawaii to the United States in the late 1800s, said Noelani Goodyear-Ka`opua, a political science professor at the University of Hawaii.

Telescope opponents say the project will desecrate land held sacred by Native Hawaiians. Wind farm opponents cite health and noise concerns and threats to a native bat, among other issues. Those who say they are protecting the beach park argue that the renovations are unneeded and unwanted. They also say it will increase traffic.

Like on the Big Island mountain, there are protest camps at the Oahu sites of Kahuku and Waimanalo that feature a large tent, food and supplies and even so-called universities featuring lessons and workshops on subjects ranging from civil disobedience to taro-pounding.

Some stay overnight in the name of protection. Some allow themselves to be arrested if needed. Some come on the weekends to jam with musicians in an atmosphere of fellowship.

“We´re here to protect our aina and our community,” said Kananiloa`anuenue Ponciano, one of the leaders fighting against the turbines, using the Hawaiian word for land. Some of the leaders against the telescope went to the Kahuku encampment to provide advice and guidance, she said.

The movements are similar because they touch on the marginalization of Native Hawaiians, said Ku`ike Kamakea-Ohelo, president of Save our Sherwoods, which uses the name that locals call the beach park.

“We are fighting quote-unquote progress that does not include a Hawaiian perspective,” he said.

At every step of the way for about 10 years, members of the community opposed the wind turbines, said state Sen. Gil Riviere, who represents Oahu´s north and windward shores.

There are broader issues fueling the protests. One is the frustration over the state´s high cost of living, Goodyear-Ka`opua said.

“The increasing difficulty for Hawaiians and all local people to make a living here and to have a decent standard of living is really pushing people to the point where they´re saying, `What do I have to lose at this point?´” she said.

AES Corp., the Virginia-based energy company building the turbines, said there´s no proof of negative health effects and that the noise is similar to light traffic. The company says it has a habitat conservation plan developed with state and federal agencies to protect the endangered bat. Each turbine will be about 568 feet (173 meters). Hawaii´s tallest building, Honolulu´s First Hawaiian Center, stands at 429 feet (131 meters). There are already 12 shorter turbines in Kahuku.

Despite the protests, construction of the first turbine is complete.

In response to the beach park protests, Honolulu Mayor Kirk Caldwell said his administration is only proceeding with the first phase of the project, which includes a playground and parking stalls.