Prague locals tire of tourists, 30 years after end of Communism 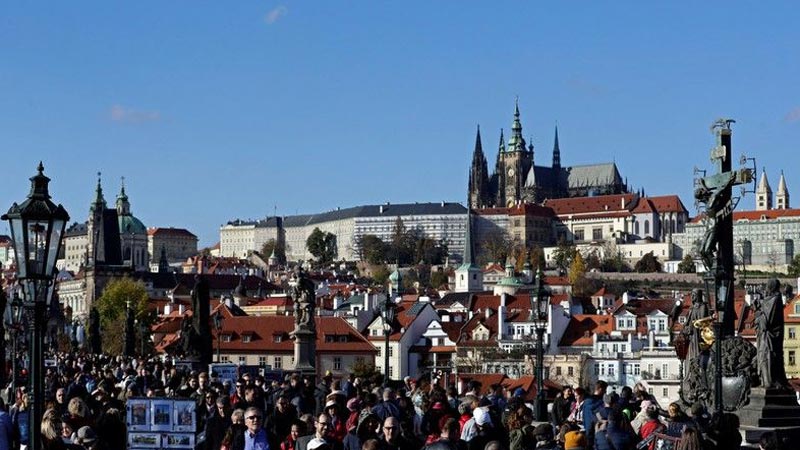 The view from Pavel Kacirek’s apartment overlooking Prague’s majestic Old Town Square should make it the dream home, but the hordes of tourists and clogged streets mean it no longer is.

As Czechs prepare to mark 30 years since the Velvet Revolution ended Communism – ushering in a boom in tourism and considerable wealth along with it – not all local residents see the change as positive. “People have moved away, so services, shops, cheaper restaurants have gone with them,” said 72-year-old Kacirek, a documentary filmmaker.

“The monuments are here, the towers, the gothic and baroque – they stand. But it is really a Disneyland decoration.” Nearly 8 million tourists visited Prague last year, making it one of the most visited cities in Europe and putting pressure on local services providing for 1.3 million residents. One of the most acute problems is a lack of affordable accommodation, as many apartments are converted into offices or short-term lodgings. Airbnb listed nearly 12,000 properties in Prague last year, according to Prague’s development institute IPR. The district encompassing the city centre has lost nearly half its residents. Registered voters totalled 21,556 in 2017 from 36,862 in 1990. Tourists now crowd the historic streets and often take advantage of cheap beer to party late into the night. “The tourist numbers are certainly greater than Prague can bear,” city mayor Zdenek Hrib told Reuters, adding that Prague was trying to attract higher-spending visitors including those coming for business meetings.

“We are trying to resolve the Disneyland that is evolving here.”

When Communism ended in 1989, Prague was an unpolished diamond, shrouded in air pollution and lacking services. Decades of underspending meant buildings were crumbling.

Billions of dollars of investment and tourism spending have poured in since, transforming Prague into the richest region in central and eastern Europe with gross domestic product per head at 187% of the EU average, according to 2018 Eurostat data.

Now the city’s main tourist areas, including around the castle and Charles Bridge, are lined with souvenir shops, money exchanges and massage saloons.

“It is about how Prague positions itself. If we remain a cheap bar, there will be slops,” said architect Kristof Hanzlik at his family home built in the 17th century that hugs the walls of the Prague Castle gardens. “If this big overload recedes, maybe some apartments will free up and people start moving back.” The city has taken steps to address the problem, including appointing a “night mayor” to crack down on noise made by revellers at night.

Officials have also evicted a handful of currency exchanges that charged double-digit commissions and they plan to end rentals to tourism shops in favour of services for locals.

It has banned people making money by posing for photos in giant panda costumes in the Old Town Square, and cracked down on pseudo-historical cars.

Beer bikes – which provide beer on draft and are propelled by pedalling drinkers – will be banned next season.

And a law allowing an increase in charges to stay in Prague to 2 euros a night from 0.8 euros has been passed by parliament, although mayor Hrib says the ceiling should be higher in the centre.