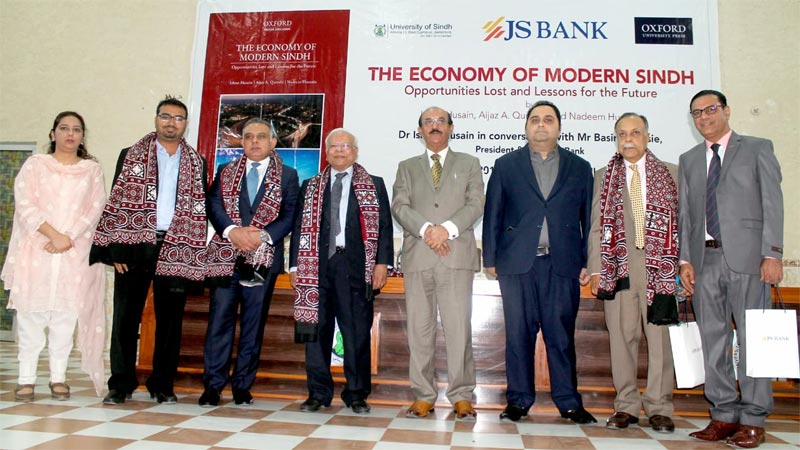 A highly thought-provoking, informative and insightful discourse was witnessed at the Sindh University, as its Bureau of Students Tutorial Guidance/Counselling Services and Co-curricular Activities (STAGS) in collaboration with JS Bank Limited and Oxford University Press, Pakistan organised an inspiring and extensively interactive panel discussion on the book The Economy of Modern Sindh: Opportunities Lost and Lessons for the Future with SU Vice Chancellor Prof Dr Fateh Muhammad Burfat as event president, Adviser to the Prime Minister on Institutional Reforms and Austerity and former State Bank of Pakistan Governor Dr Ishrat Hussain, President and Chief Executive Officer of JS Bank Limited Basir Shamsie, Prof Aijaz A Qureshi and Nadeem Hussain as panellists; whereas Imran Haleem Shakih and Dr Ghulam Ali Buriro facilitated the moot as moderators.

Dr Ishrat Hussain, in his erudite deliberations, said that merely writing a book on the economy of Sindh was not enough, and argued that it was essential to build upon the book in the form of holding of critical discourses on its contents among academia and students to cascade its import to the widest possible range of masses. “This philosophy has brought us to SU today,” he asserted.

“Five motivations served as causative forces behind our inking of this book: i) As nation, we are a sizeable entity but without having recourse to tangible data evidence at micro level; ii) we also do not have any reliable textual reference on the economy of Sindh; iii) the Sindh government also did not have tangible evidence base upon which it could formulate policy frameworks; iv) there was no narrative in existence upon which a critical discourse based on reason, rationality, logic, facts and evidence could be set into motion, and v) lastly there was no trigger material at hand to serve as impetus to spark authoring of more books on economy of Sindh dealing separately with each subject-head discussed in our book. Our book fills all these gaps,” he said.

Dr Hussain opined that Sindh was resource-rich with clear comparative advantages of having sea ports, human resource talent, intellectual property pool, large tracts of irrigated lands, natural gas and coal reservoirs and a dynamic private sector, but all to no avail; because of their lack of knack to exploit those resources to their true potential. “I see urban-rural disparity, low ratio of female education, low female participation in labour force, absence of cottage industry and small-scale market economy, and paucity of micro-economic sector i.e. dairy, fisheries, poultry, livestock, fertilisers and horticulture as causes behind socio-economic deterioration in Sindh. And I recommend immediate policy and urgent action interventions as a panacea to end these ailments,” he emphasised.

Dr Hussain submitted sincere debt to Allama II Kazi, Dr MA Kazi and Dr NA Baloch as his great benefactors and guides, adding that he felt especially delighted to have been back to his roots, ie Sindh University, where he once studied and then taught for a short span of time.

Dr Burfat, citing words of Quid-i-Azam, argued that economic uplift would not be possible without women joining national workforce, as they were the greater pocket of population in the country.

The vice chancellor announced sending the varsity’s commerce and business interns to local small town cottage industry sector with a view to research their problems and growth prospects.

“I am highly grateful to the distinguished panellists and JS Bank Limited leadership for bringing this high-power knowledge economy dialogue to SU. Our varsity faculty, social science researchers and students have greatly benefitted from this interaction,” Dr Burfat observed. The vice chancellor also eulogised the efforts of STAGS Director Dr Sumera Umrani and her team towards successful organisation of the event.

JS Bank President and CEO Basir Shamsie stressed upon bringing back industry to its original destinations in the wake of improved security and infrastructural landscape in Pakistan.

“Our capital that lies land-locked in the form of lands without housing and real estate boom needs to be unlocked to usher economic development in Sindh. This is exactly what this book on economy of Sindh insists,” he said.

Shamsie further said that those were the times of collaborative and partnership ventures. Quoting ‘Uber’ and ‘Careem’ as case studies, he argued that technology, human resource (driver), bank (finance) and government (infrastructure) put together formed a successful model of modern business.

Prof Aijaz Qureshi said there was a dire need for academia and students from other universities in Sindh to register their critical opinion on the contents of the book to advance discourse and find solutions to the problems portrayed and analysed by them in the manuscript.

Nadeem Hussain proposed free female education in Sindh, minimisation of urban-rural disparity and initiation of online entrepreneurial projects at mass level in the interest of economic boost in the province. A vigorous interactive question-answer session and souvenir-exchange episode brought the intellectually enriching programme to a close.