An EU research center for countering disinformation debunked 265 online Indian news sites which are using names of outdated papers and newspapers to promote anti-Pakistan news on a regular basis across the world.

The Brussels EU Disinfo Lab has found that these 265 online English news are utilizing counterfeit names of local papers circulating in more than 100 countries. Its primary point is to propagate anti-Pakistan news and to depict New Delhi’s arrangements exceptionally good.

On the ongoing cruelty on Kashmir by Indian forces, these disguised news websites have illustrated the situation in Kashmir with normality. As the center cited, “covering events and demonstrations criticizing Pakistan’s role in the Kashmir conflict.”

Fake names like American Weekly, Times of Bulgaria, Times of Geneva and Times of Cyprus, this network tries to give itself a cover of legitimacy, according to the DisInfo Lab’s database.

Out of these fake news websites, two are running in Pakistan which constantly criticize European Union policies and the relationship of Pakistan with America.

The Indian disinformation became uncovered when a complaint submitted in EU Disinfo Lab by some American and Russian channels that an online website named. “epotoday.com” repeatedly replicate their stories. Probing the event, it was discovered that the epotoday.com is run by some India-based Srivastava Group. Subsequently, after broadening the investigation, the links of such controversial fake news channel revealed.

It was discovered that all these news channels are racing to strengthen the bad image of Pakistan in the world.

“Among this syndicated content, we unexpectedly found a large number of articles and op-eds related to minorities in Pakistan as well as other India-related matters.” 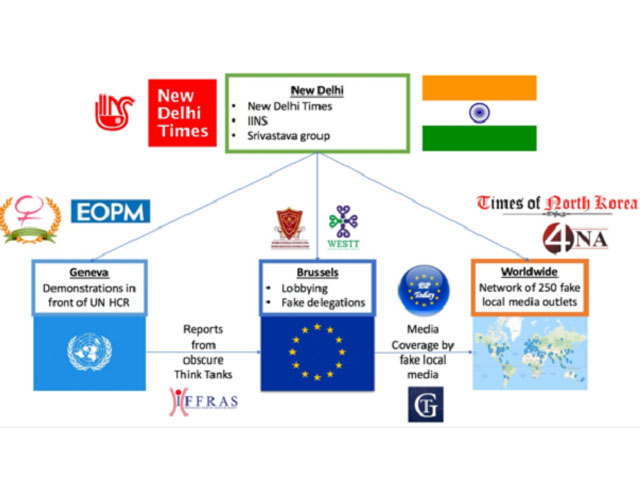 Notably, the fakes news were against the minorities of Pakistan, the rights of women and the people of Balochistan.

“Unexpectedly found a large number of articles and op-eds related to minorities in Pakistan as well as other India-related matters.”

Breaking down for what reason would these Indian news channels have done, at least after 2010?  European Union research center of countering disinformation has given these 5 points.

1. Most of them are named after an extinct local newspaper or spoof real media outlets;

Spreading fabricated data is a typical practice in India. Even Indian nationals are not spared from this practice of their media. Earlier in 2018, 20 people were murdered as a result of misinformation circulated on social media.

Rasmus Kleis Nielsen, director of a UK based institution named Reuters Institute for the Study of Journalism, has quoted, “the problems of disinformation in a society like India might be more sophisticated and more challenging than they are in the West.”