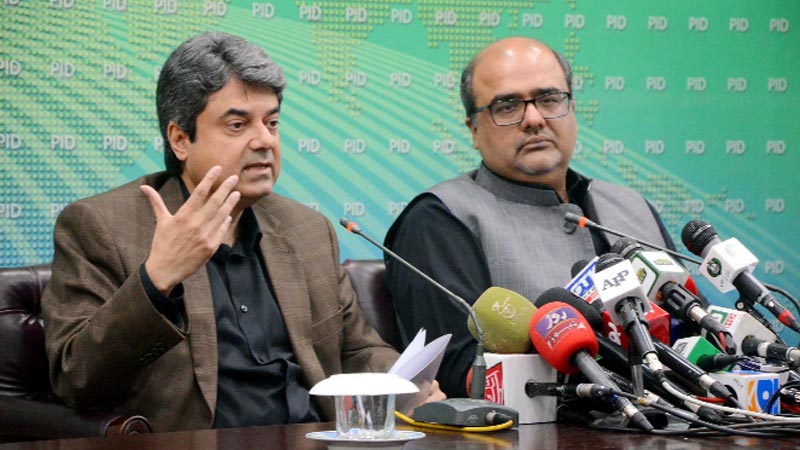 The federal government after detailed deliberations on Wednesday accepted the application of opposition leader Shehbaz Sharif to permit former prime minister Nawaz Sharif to go abroad for four weeks for treatment subject to submission of an indemnity bond of Rs 7 billion.

Announcing the decision here at a press conference, Minister for Law and Justice Barrister Farogh Nasim flanked by Special Assistant to Prime Minister on Accountability Shahzad Akbar said it is a one-time permission only for a period of four weeks. The former prime minister has to return to the country after recovering from the illness as he is a convict in a corruption case and under trial in another one, he said. The government, he said, is seeking the indemnity bond as a precaution to respond to the court’s queries in case Nawaz Sharif does not return to the country.

Farogh Nasim said keeping in view Nawaz’s medical reports of the Sharif Medical City and the medical board constituted by the Punjab government, the subcommittee considered the application for removal of his name from the exit control list (ECL) on humanitarian grounds. He, however, clarified that the assurances being sought from the Sharif family in this regard are a legal requirement, which should not be used for political point-scoring. The Sharif family has a right to reject the government’s decision or to challenge it in in a court of law, he added.

The minister said the permission is ‘not conditional to anyone’s consent’ and has been granted to fulfil the government’s obligations in view of Nawaz’s ‘adverse critical medical condition’. He said the interior ministry had received an application from PML-N President Shehbaz Sharif for the removal of Nawaz’s name from the no-fly list. Along with the plea, a detailed medical report from Sharif Medical City hospital was also submitted. It was cross-checked and on November 10, the Punjab medical board in its report agreed with the report of the Sharif Medical City, he said, adding that the report highlighted that Nawaz had a blood disorder, while his platelet count was around 25,000 when it should have been around 150,000 or above.

“On November 12, we held three meetings and the sub-committee informed the cabinet that Nawaz Sharif’s medical condition is very serious,” he said, noting that besides the blood platelets issue, Nawaz suffers from numerous cardiac issues and has undergone six heart procedures in which seven stents were inserted. Naseem quoted doctors as saying that when they attempt to treat Nawaz’s platelet count issues, other complications including those related to his heart arise.

The law minister acknowledged that the committee members had not known that the former prime minister’s condition is ‘so adverse’, and once apprised of the same, the federal cabinet voted in favour of allowing Nawaz to travel abroad with a ‘thumping majority’. However, he said, the cabinet members agreed that the permission will be ‘one time’ and will be subject to the Sharif family submitting an indemnity bond. He said the permission will be formally issued to the Sharif family shortly. “It is up to them how they take the matter forward,” he added.

The sub-committee meeting was also attended by Special Assistant to Prime Minister on Accountability Shahzad Akbar.

A memorandum issued by the interior ministry in the evening said, “It has been decided by the federal government to allow one-time permission to Mr Muhammad Nawaz Sharif […] to travel abroad for medical treatment for a period of 04 weeks from the date of departure (during his bail period), subject to furnishing indemnity bond as following: 8 million UK pounds or equivalent rupees; US $25 million or equivalent rupees; Rs1.5 billion.”

Shortly after the news conference, the PML-N rejected the government’s conditional offer to allow Nawaz to travel abroad. In a statement, party spokesperson Marriyum Aurangzeb said the government decision to make the removal of Nawaz’s name from ECL conditional to the submission of indemnity bonds was based on ‘Imran Khan’s biased attitude and revenge politics’. She said surety bonds had already been submitted and constitutional and legal requirements had been met at the time of securing Nawaz’s bail from high courts. “A government court cannot be established above the court,” the spokesperson said, adding that the government demand to submit security bonds was not acceptable to the party.

After marathon meetings of the federal cabinet and its sub-committee on Tuesday, Nawaz had refused to travel abroad for his medical treatment under the conditions proposed by the government. The government had asked that the PML-N supremo’s brother Shehbaz Sharif or his daughter Maryam submit on his behalf surety bonds equivalent to the fines imposed on him in the two corruption cases – Al-Azizia Steel Mills and Avenfield properties.