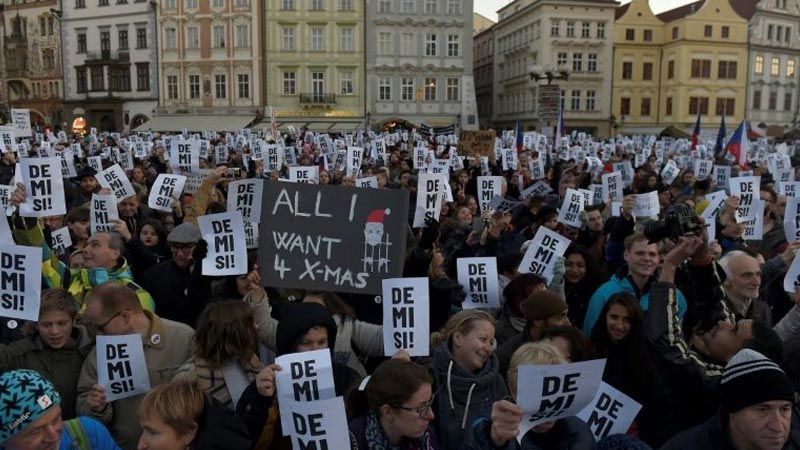 Three decades after staging mass protests that freed them from communism, Czechs and Slovaks are hitting the streets again, bitter over pervasive corruption and politicians with roots in that era.

The Velvet Revolution of 1989 saw unprecedented protests and a general strike end four decades of Soviet-imposed totalitarianism in what was then Czechoslovakia.

The country was a member of the Warsaw Pact which crumbled that year as communism collapsed in East Germany, Poland, Hungary, Bulgaria and Romania, so ending the Cold War.

But Communists never quite disappeared from politics and are now joining forces with populists in a bid for power in Czechoslovakia’s successor states, the Czech Republic and Slovakia.

“The Communist legacy still exists in Slovakia, and corruption is a big problem,” says Milan Knazko, a Slovak actor who is among the Velvet Revolution’s most popular leaders.

A former communist, populist Czech Prime Minister Andrej Babis is tagged as an agent in secret police files from the 1980s, something the billionaire has flatly denied.

His minority coalition government can only survive in parliament thanks to the informal support of the Communist Party, which controls 15 seats in the 200-member lower house.

Babis also faces a string of graft and conflict-of-interest allegations centred on Agrofert, his sprawling farming, media and chemicals holding.

Huge crowds flooded central Prague in June demanding Babis step down over the allegations in a protest that local media reported drew around 250,000 people, making it the largest since the Velvet Revolution.

Its organisers, the Million Moments for Democracy movement, are planning another protest for November 16 to mark the Velvet Revolution.

“We’ll issue an ultimatum to Andrej Babis: either he resolves his conflict of interest… or steps down as prime minister,” chief organiser Mikulas Minar said this week, threatening bigger rallies should Babis fail to respond.

With political roots in the Communist Party, Robert Fico, leader of Slovakia’s governing Smer-SD populist social democrats, is widely regarded as calling the political shots despite not being in government.

He was forced out as prime minister in early 2018 following the gangland-style murder of investigative journalist Jan Kuciak, whose work unveiled alleged ties between some officials in Fico’s administration and the Italian mafia.

The murder sparked the largest protests Slovakia has seen since the Velvet Revolution, with tens of thousands rallying in Bratislava alone.

Several other officials were forced to quit after their links to shady entrepreneur Marian Kocner, charged with ordering the murder, came to light.

On November 17, 1989, Communist police brutally crushed a peaceful student march in central Prague, triggering the switch to democracy known as the Velvet Revolution.

Slovaks flooded the streets two days later and then tens of thousands of people rallied in both Prague and Bratislava for days.

The Communists gradually bowed out and dissident playwright Vaclav Havel became president of Czechoslovakia, leading the country to democratic elections in 1990.

After splitting in 1993, the Czech Republic and Slovakia went on to join NATO and the EU, with Bratislava also joining the eurozone in 2009.

New politicians and political parties emerged along the way, but voters gradually lost patience with them, mainly due to widespread corruption, and began turning to politicians with communist roots.

“Tolerance for co-operation with the former regime, unacceptable in high-level politics in the past, has increased markedly,” says Tomas Lebeda, a political analyst at Palacky University in the eastern Czech city of Olomouc.

“Society is too easy-going and too tolerant towards entities that might jeopardise the democratic process,” he added.

Babis, the fifth wealthiest Czech according to Forbes, shrugged off allegations of murky business dealings and his Communist past to enter government as finance minister in 2013, pledging to fight corruption.

It has since topped opinion polls, with 30-percent voter support despite graft allegations that have dogged Babis.

The latest polls suggest his Smer-SD, which still heads the coalition government under Prime Minister Peter Pellegrini, will top the general election due in February.

“Strong personalities are the winners, regardless of their past,” independent Czech political analyst Jan Kubacek told AFP.

“The new (anti-communist opposition) faces simply failed after the revolution, and people have started looking for alternatives,” he added.