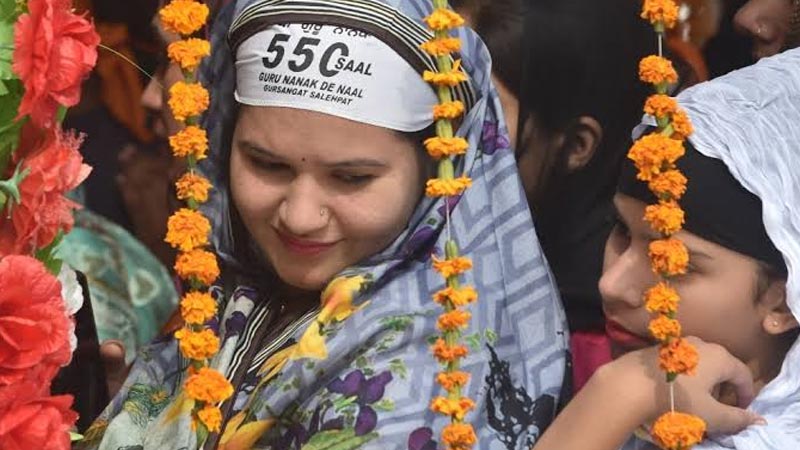 Thousands of Sikh pilgrims from all over the world, including India, actively participated in the celebrations of 550th birth anniversary of Baba Guru Nanak Dev Ji.

A large number of pilgrims from across the world thronged at Gurdwara Janam Asthan in Nankana Sahib, the birthplace of Sikh religion’s founder, on Tuesday to mark the 550th birthday celebrations. Strict security arrangements were made for Sikh pilgrims who expressed their full satisfaction over the security and other arrangements made for them by the Pakistan government.

Punjab Governor Chaudhry Mohammad Sarwar, Federal Minister for Interior Brig (e) Ejaz Shah, Federal Minister for Religious Affairs Pir Noorul Haq Qadri and Parliamentary Secretary for Minority Rights Sardar Mahindar Paal Singh also participated in the birthday celebrations at Janam Asthan. According to details, thousands of Sikh pilgrims and groups from India, UK, Canada, America and other countries participated in the 550th birthday celebrations of Baba Guru Nanak and performed their religious rituals there. All the Sikh pilgrims were more than happy regarding the 550th birthday of Baba Guru Nanak as well as opening of the Kartarpur Corridor.

Speaking on the occasion, Punjab Governor Chaudhry Mohammad Sarwar said that issuance of multiple visas for Sikh pilgrims had been started so that Sikhs coming from across the world to Pakistan for their religious rituals could also go to India conveniently.

Federal Interior Minister Brig (r) Ejaz Shah said that there was no such example in Pakistan’s history regarding the measures taken by Prime Minister Imran Khan for Sikh and other minority communities. Islam advocates love, peace and fraternity and Baba Guru Nanak had also talked of love and peace, he said. He said that the Kartarpur Corridor was an important step towards regional peace. “I am in love with every street and corner of Nankana Sahib and it became a district due to my personal efforts in 2005,” said Ejaz Shah, who got elected as MNA from Nankana.

Federal Minister for Religious Affairs Pir Noorul Haq Qadri said that he paid great tribute to Punjab Governor Chaudhry Mohammad Sarwar, who was also head of Religious Tourism and National Heritage Committee, for making great arrangements on the occasion of Baba Guru Nanak’s birthday. He said that Chaudhry Mohammad Sarwar had done years’ work in months and today, Sikh pilgrims coming from all over the world were expressing their happiness. He said that Indian aggression and human rights violations in Occupied Kashmir and shameful measures against its minority communities were all exposed before the international community. On the other hand, Pakistan had given respect to its minority communities and ensured protection to their lives and properties, he said. “We are providing security and other facilities to Sikh community and InshaAllah Pakistani people would also come up with the same spirit of moving head while taking along the minority community.”

The elders of the Sikh community also spoke on the occasion and paid gratitude to the government for making arrangements for them. A very colourful procession carrying the ‘Palki’ of Guru Nanak Ji was also carried by a large number of Sikh pilgrims, while they also performed their religious rituals at the gurdwara. According to the district administration, around 40,000 pilgrims participated in the 550th birthday celebrations of Baba Guru Nanak.