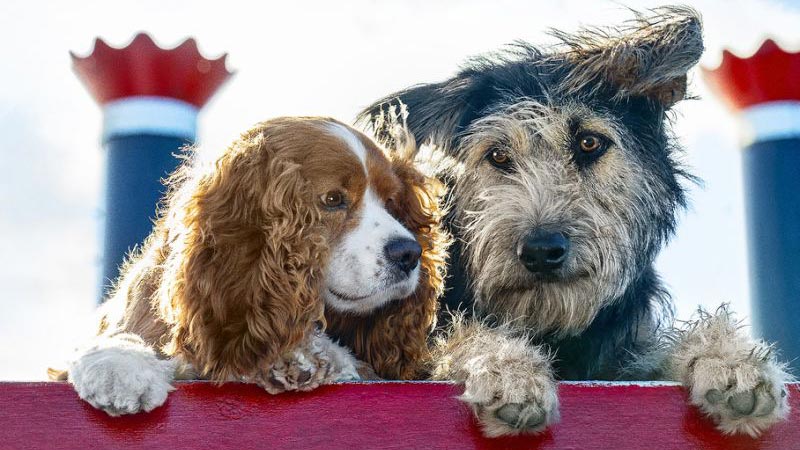 Disney’s recent live-action remakes of Mouse House animated classics have had to make major and minor changes to the source material. On one side of the spectrum, Tim Burton’s Dumbo erased one of the 1941 cartoon’s most controversial scenes, and added an entire hour of new material. Meanwhile, Jon Favreau’s update of The Lion King only made a few tweaks to the 1994 classic.

The new version of Lady and the Tramp, which premieres on Disney+ in North America today (31 March, 2020 in the UK), falls in between those two extremes. The Charlie Bean-directed remake of the 1955 animated favourite includes many of the most fondly remember moments from the original film, but also makes one significant omission.

One sequence that the studio would never have dreamed of cutting is the back alley dinner where the title characters — the privileged cocker spaniel Lady (voiced in the new film by Tessa Thompson), and the stray mutt Tramp (Justin Theroux) — fall in love over a plate of spaghetti and meatballs.

“That scene was arguably the first time, as a child, that I considered romance,” Thompson tells Yahoo Entertainment. “To get to play that out is sort of surreal — and then to see it with real dogs!”

That’s right; unlike the CGI lions who populate the new Lion King, all of the canines in Lady and the Tramp are real rescue dogs. Although, as Thompson confesses, the cast’s canine counterparts had some digital assists when necessary — like say, chowing down on a big plate of pasta.

“It was great to see these natural-born performers and the real life animation for the dogs to help them do all the things that they either won’t do or isn’t safe for them to do.”

While no Lady and the Tramp remake would be complete without the spaghetti scene, the filmmakers decided that remove one of the most problematic songs in the Disney canon: ‘The Siamese Cat Song’, sung by a pair of Siamese cats that bedevil Lady in the animated film.

Recorded by Peggy Lee, the tune’s lyrics and musical stylings are notably dated today, reflecting a ’50s-era Orientalism that’s out of step with the current times. Similarly, the live-action Dumbo made a point of omitting a musical number from the animated version — ‘When I See an Elephant Fly’— that reflects the long-vanished minstrel show tradition.

In addition to recording two new songs for the live-action version, Janelle Monae was brought in to rework that musical sequence from the ground-up.

Interestingly, Disney+ subscribers will have the chance to watch both the the 2019 version of Lady and the Tramp and the 1955 version on the studio’s new streaming service, allowing families to compare and contrast the two films, and discuss moments like ‘The Siamese Cat Song’. For Theroux, the change is a positive one. “This movie obviously did a big re-work on that, and I think it’s an improvement. These are movies that are meant to be watched and enjoyed, and it’s nice to see them updated in several ways.” Adds Thompson: “That’s the benefit of them being looked at again with a modern lens.”