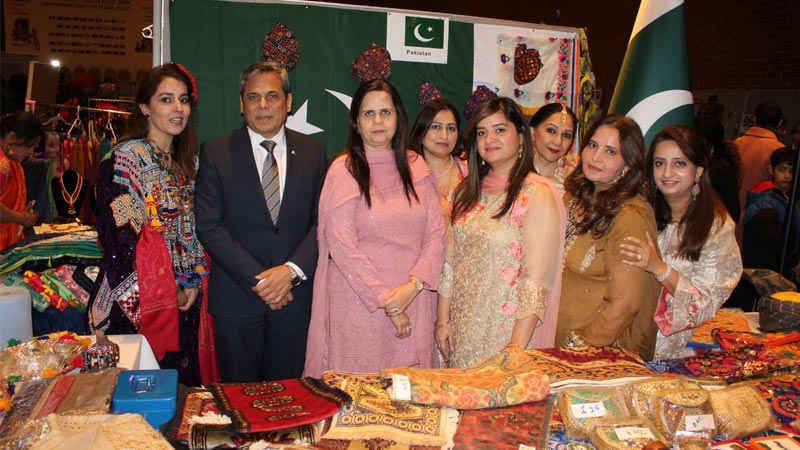 The Commonwealth Fair, which marked 70 years of its existence, was inaugurated in the presence of high commissioners of some of the initial signatories of London Declaration of 1949, including Pakistan.

British Minister for Foreign Office Lord Tariq Ahmad of Wimbledon was the chief guest, while Pakistan’s High Commissioner (HC) Mohammed Nafees Zakaria and his spouse were among the few who were invited to the stage for the inauguration.

Beautifully embellished Pakistani Stalls at the annual fair of Commonwealth Countries League (CCL), turned out to be a huge attraction for the visitors. With their traditional handicrafts, clothes and exotic cuisine, the Pakistani Stalls reflected the richness and diversity of Pakistani culture and attracted a large number of culture enthusiasts throughout the day.

The goods and souvenirs put on display included a variety of regional clothes, hand embroidered shawls, tapestries, traditional jewellery, bags, cushion covers, throws, bangles, caps and silk coats. The Henna Corner at the Stall was a special attraction for the young girls from different Commonwealth member countries, who queued up for their turn.

Pakistani cuisine, especially, Biryani, with its exquisite taste, aroma and presentation, was a culinary delight. Popular national songs of Pakistan were also played on the occasion, which were thoroughly enjoyed by the visitors. The occasion provided the visitors with a great experience of Pakistani culture from food to craft.

Led by the wife of HC Pakistan, Nelofar, the ladies of the High Commission had organised the Stalls to introduced to the visitors the beautiful handicrafts made by the Pakistani women. Speaking on the occasion, she said that the CCL Fair is held annually and the Pakistan mission in the UK regularly participates in it. She further said that the Fair gives good opportunity to all member countries and families of the diplomats to interact with each other and develop appreciation of their cultures.

HC Nafees Zakaria also visited the Pakistani Stalls along with Lord Tariq Ahmad and members of diplomatic fraternity. Zakaria commended the efforts of the ladies of the High Commission for actively promoting Pakistan’s culture and traditional products through participation in local community events. Reaffirming Pakistan’s commitment to the Commonwealth and its core values, he said: “Pakistan being the founding member of the Commonwealth, has excellent relations with the Organisation, and participation in such events would further strengthen these relations.”

The Annual Commonwealth Fair raises funds for the CCL Education Fund (CCLEF), with the support of the Commonwealth countries. The proceeds of the Pakistani stalls were also donated to the CCLEF. The fund equips the disadvantaged girls with education to bring about positive change in society.