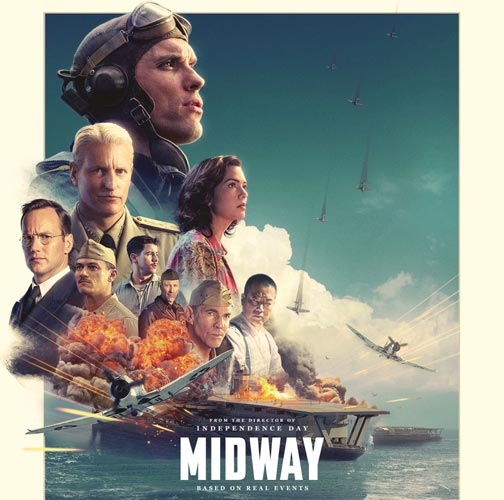 The Battle of Midway was the turning point of the Pacific front in World War II. And yet, it somehow hasn’t captured the Hollywood imagination like the D-Day Invasion or Iwo Jima. Decades after the Charlton Heston and Henry Fonda vehicle “Midway” (1976), the battle was ironically left out of the HBO miniseries “The Pacific” (2010).

Perhaps no narrative film could match the actual footage from John Ford’s Oscar-winning documentary ‘The Battle of Midway’.

This Veterans Day, we get a new take by director Roland Emmerich, best known for his explosive disaster movies from ‘Independence Day’ to ‘The Day After Tomorrow’ to ‘White House Down’.

If you think that tone isn’t right for such a hallowed event, you’d be right. If you’re looking for an action flick to see on the federal holiday, it might suffice if you lower your expectations.

After a 1937 prologue of Japan threatening to attack America over a crippling oil embargo, Japanese planes bomb the U.S. Navy at Pearl Harbour on Dec. 7, 1941; killing 2,403 men in a day that lives in infamy.

Turns out, the Japanese only sink the battleships, not the aircraft carriers, which are out to sea doing manoeuvres. As a result, America’s “sleeping giant” awakens for World War II retaliation, from the failed Tokyo Raid in April 1942 to the pivotal victory at Midway in June 1942.

Leading the way is Ed Skrein (“Deadpool,” “Game of Thrones”) as Lt. Dick Best, aptly named for his cockpit cockiness. He’s told to cut the “cowboy” stunts by his superior Lt. Cmdr. Wade McClusky, played by Luke Evans (“Furious 7”), who is effectively the Viper to Skrein’s Maverick – to put it in proper “Top Gun” terms.

Even Nick Jonas shows up as Bruno Gaido, creating a “boy band” of brothers like Harry Styles in “Dunkirk.”

As accomplished as these actors are, they’re given one-dimensional roles to play, speaking cliché dialogue without much character development by writer Wes Tooke (“Colony”). We never really get to know any of them because there are so many parts with equal screen time.

We understand that they’re brave members of the Greatest Generation, but we don’t know much about their personal lives.

The closest we get is Lt. Best’s wife Ann, played by Mandy Moore (“This Is Us”), but she is only given a few brief scenes waiting helplessly on the home front. That’s not to say the script has to go into full-on weepy romance territory like Michael Bay’s “Pearl Harbour” (2001), but Moore is too big a star not to use her considerable talents.

Strong female characters ruled the day in Fred Zinnemann’s “From Here to Eternity” (1953), which won Best Picture as a result.

Instead, “Midway” focuses mostly on the warfare, which features a few historical inaccuracies. In reality, the Japanese waged two assaults on Pearl Harbour about 20 minutes apart, but the film condenses it to only one.

Also, Japan didn’t use kamikaze attacks until later in the war in 1944, but the film shows it happening early on in 1942. There are other ridiculous moments like a sailor straddling a runaway missile to slow its momentum as it errantly slides across the deck.

Visually, the special effects have obviously improved greatly since the Heston flick, but if you’ve seen a lot of war footage on the History Channel, the CGI might look a little cartoonish for your military acumen. As the aerial gunners fire off rounds at enemy fighters, it feels a bit like a first-person-shooter video game.

For more realistic footage, you might have to rent the aforementioned 1942 documentary by Ford, who is amusingly played by Geoffrey Blake in “Midway,” keeping the cameras rolling amid the chaos. Ford was one of five filmmakers – William Wyler, John Huston, Frank Capra and George Stevens – whose war footage was documented in the Netflix series “Five Came Back” (2017).

In “Midway,” the final battle runs 45 minutes in an action-packed showcase for Emmerich’s explosions. The multiple waves of attack show the enormity of the campaign, but they build to an anti-climactic finish as the U.S. pilots regroup for another assault only for the Japanese to surrender. There’s not that fist-pumping final moment of patriotic elation like Randy Quaid’s sacrificial cry, “Up yours!”

On the plus side, the Chinese-American production does its best to show both sides of the struggle. Japanese Admiral Isoroku Yamamoto (Etsushi Toyokawa) gets plenty of screen time in cutaways between the action.

Japanese officials compliment the American pilots as brave and the Japanese captains go down with their ships with honour. Ultimately, the end credits dedicate the movie to both the American and Japanese sailors, saying, “The sea remembers its own.”

In the end, you can’t help but feel uplifted by the “where are they now” epilogue showing the aftermath of the heroes and the military awards named after them. For this alone, it might make a worthy Veterans Day watch if you bring your veteran grandparent or war-buff parent.

You’ll remember the experience with your loved ones more than the actual movie, but that in and of itself is a victory.