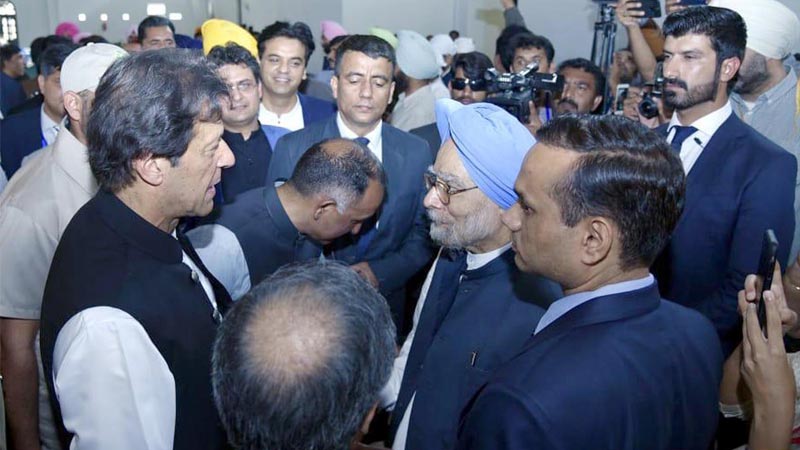 Prime Minister Imran Khan Saturday, while showing his optimism for the regional peace and development, said time is not far when the subcontinent will achieve prosperity once the Kashmir issue is resolved and the Kashmiris get their due rights.

“France and Germany fought so many wars and killed millions of people. Look the Germany and France of today, they now trade with each other with their borders open and have prosperity. No one even can think of war (there). Insha Allah when this Kashmir issue is resolved and Kashmiris get their right, the subcontinent will also see that kind of prosperity,” the prime minister said while addressing the inauguration ceremony of Kartarpur Corridor here.

The corridor will give a visa-free access to the Indian Sikhs to visit Gurdwara Kartarpur Sahib, the second holiest shrine of their faith, located some 4.1 kilometers from the Indian border in Pakistan.

The prime minister, who visited the huge Kartarpur complex to review the arrangements, also welcomed former Indian prime minister Sardar Manmohan Singh and his cricketer friend Navjot Singh Sidhu as they went through the immigration process at the terminal.

Bollywood actor Sunny Deol and Chief Minister of Indian Punjab Amrinder Singh were also among the prominent pilgrims in the ceremony that was also attended by hundreds of Sikh pilgrims from India and Pakistan, diplomats and media men from both sides of the border.

The prime minister, who earlier cut the ribbon to inaugurate the much-anticipated corridor ahead of the 550th birth anniversary of Baba Guru Nanak, appreciated the Frontier Works Organization and other government departments for completing the project in record 10 months.

To a suggestion by Sidhu to open the border, the prime minister said soon after assuming his office, he had offered Modi to enhance the bilateral engagement to address the regional challenges of poverty, climate change and polio, besides peacefully resolving the Kashmir dispute through dialogue.

He also recalled his interaction with Manmohan Singh in a summit in India in which the latter had also viewed that the region could prosper if the Kashmir issue is resolved. But unfortunately, the prime minister said, the Modi regime has turned the Kashmir issue from mere a territorial to a human rights one as around 900,000 Indian troops have put eight million people under siege in the occupied valley.

He told the gathering that the Kashmiri people are being treated like animals and their rights are being usurped, which were guaranteed by the United Nations. “Peace cannot be established this way. By this (issue) all of our relations are on halt,” he remarked. 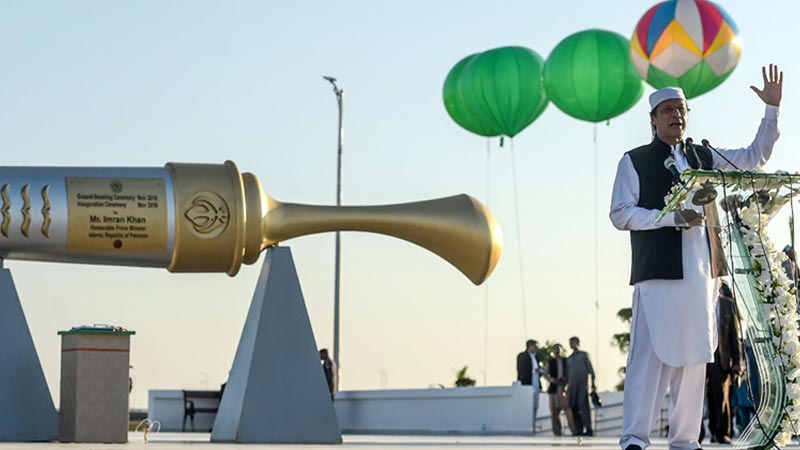 He said the peace can only be made by bringing justice as injustice could lead to anarchy, and urged the Modi government to liberate the Kashmiri people to let them live their own free life. He said if the border is opened for trade, one could guess how much prosperity the region can achieve and the people get rid of poverty.

The prime minister said he is pleased to see the happiness on the faces of Sikh pilgrims who have got their longstanding demand fulfilled. He said being a mercy for the whole universe, Holy Prophet Muhammad (PBUH) promoted the messages of humanity and justice which has been the core factors to differentiate the human societies from the jungle life. Similarly, he said Baba Guru Nanak also promoted humanity and unity, while opposing any social division and hatred. He said being inspired by the peaceful teachings of great Sufi saints including Baba Farid, Nizamuddin Aulia and Moeenuddin Chuishti, people revered them and visit their shrines regularly.

The prime minister, who wore a bandanna, a white kerchief tightly tied around the head as bare head is considered inappropriate in Sikhism, said he is pleased to have done this for the Sikh community. Before this initiative, he had never thought of such a significance of Kartarpur Gurdwara among Sikhs.

The prime minister reiterated that the real leaders had always contributed to bring social unity and never got votes by creating hatred in the society. He said Nelson Mandela was highly revered in South Africa because he had fought for unity in the society that had been apartheid by racism and saved his country from bloodshed.

The prime minister said for the first time, the Sikh people would be able to come to Kartarpur and pay respect to the founder of their faith. “I hope this is a beginning. Insha Allah, one day, our relations with India will be as it should have been had the Kashmir issue been resolved in the beginning,” the prime minister said.

Minister for Religious Affairs Pir Nurul Haq Qadri said the inauguration of Kartarpur Corridor was the greatest message of peace after the partition in 1947. He said the prime minister has fulfilled his commitment to provide access to Sikh community to visit their holy shrines.

Akal Takht Jathedar Giani Harpreet Singh said by opening of Kartarpur Corridor, the 70-year old demand of Sikhs had been fulfilled for what they were thankful to both the governments. He said the Muslims and Sikhs shared religious values as Baba Guru Nanak had also taught oneness of Allah and had spent a long time here in this area.

Foreign Minister Shah Mehmood Qureshi called the Kartarpur Corridor a ‘road to peace and love’. “Just one year ago, this place gave a barren look, but now we can witness a sea of people here,” he said, adding, “We have honoured our promise and turned a dream into reality.”