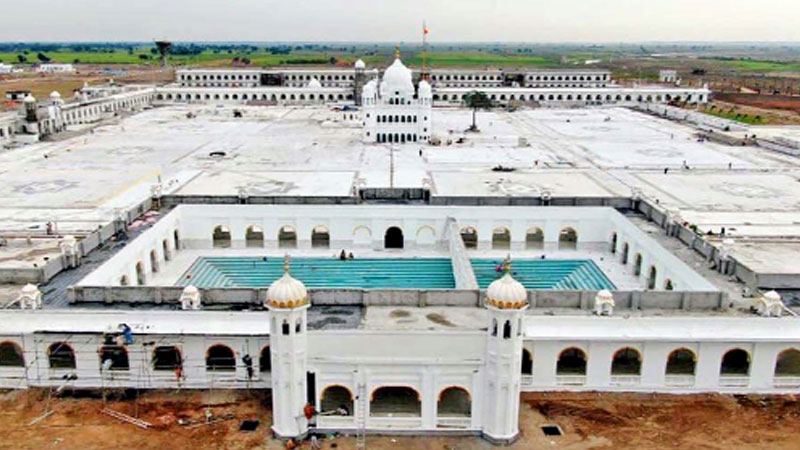 Under the same sky but from a land divided by several meters high razor-wired double fence, Indian Sikhs for the past 70 years have been viewing from afar 4.5 kilometers Gurdwara Kartarpur Sahib, which lies in Pakistan.

Hundreds of Sikhs everyday would make a beeline near the international border in Indian Punjab’s Gurdaspur district to catch a distant glimpse of one of their holiest shrines situated in Pakistan’s Narowal district. However, now their wait is over. For some it will be a life-long cherished dream, about to materialise, as they set foot in their holiest site.

On Saturday (today), the first batch of 10,000 pilgrims is set to perform their rituals within the compound of the Gurdwara after seven decades, on the 550th birth anniversary of Baba Guru Nanak.

Prime Minister Imran Khan, who envisioned a year ago the construction of Kartarpur Corridor between Pakistan and India to facilitate the Sikh community, will inaugurate the much-anticipated overland passage linking the Dera Baba Nana shrine in northwest India’s Gurdaspur with the Gurdwara Darbar Sahib in Kartarpur, Pakistan. Dubbed as ‘Zero Point’, the corridor including a bridge stretches for one-kilometer over the Ravi River flowing between the two countries.

Pakistan has announced to allow visit of 5,000 pilgrims to the shrine everyday with additional numbers on special occasions, subject to capacity and expansion of facilities. As a special gesture, the government also waived off the requirement of passport and 10-day advance intimation for whole year, a move which has not received a warm welcome by India.

The stunning white-coloured edifice of Gurdwara Baba Nanak stands tall as a symbol of peace and harmony despite a relation full of discords between the two bordering countries.

The inauguration on November 9 coincides with birthday of the country’s national poet and philosopher Allama Iqbal, who in his poem ‘Nanak’ written in book Baang-e-Dara, holds the Sikh spiritual leader in high esteem for his monotheist beliefs.

The package of facilities has been set in place for the visitors, including a nine-marque village to accommodate the Sikh pilgrims coming from across the world. The regular visitors will be given a one-day pass and they will return the same day.

A Langar Khana inside the complex has a capacity to house around 2,500 pilgrims, who will arrive in after biometric registration at counters set up by the Federal Investigation Agency.

The Government of Pakistan had acquired around 800-acre land and handed over the same to the Gurdwara management as a gift. Out of which, 42 acres were allocated for the construction of Gurdwara Complex and 62 acres for the agriculture purpose to meet the needs of the Langar Khana.

The Gurdwara has been built in record time of 10 months, with high quality construction along with white marble and imported tiles. The visitors will have a glance of Sikhs history at the museum set up in the vicinity where the photographs of Sikh religious leaders have been put on display. A 12-bed hospital has also been established for any health emergency for the pilgrims.

As a monument of love, peace and affinity, Gurdwara Baba Guru Nanak awaits his followers from around the globe to arrive at the soil of Pakistan – also the Dharti of Nanak (land of Nanak).