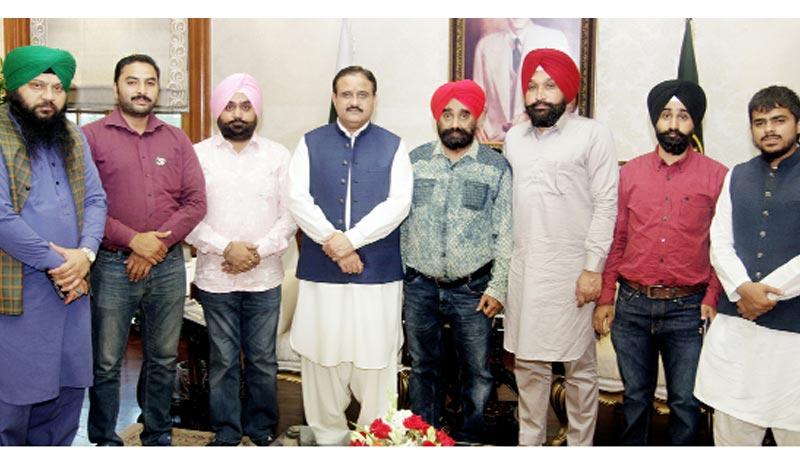 Punjab Chief Minister Sardar Usman Buzdar held a meeting at his office here on Friday in which different steps were reviewed to provide facilities to the farmers and to develop agriculture sector on modern lines.

The meeting reviewed measures to save crops from locust attack, while starting an internship programme for agri graduates was decided as well. The chief minister informed that 130 agri. graduates will be trained with an amount of 20 crore rupees. This program will be continued on an annual basis, he added. A new floriculture program will also be started with an amount of Rs40 crores. Usman Buzdar said that agri. development will strengthen the economy and vowed to continue the protection of farmers’ rights. The government will give proper reward to sugarcane growers in the next season as was done for wheat and sugarcane growers, he added.

He directed continued monitoring of Bahawalpur, Rahim Yar Khan and Bahawalnagar and further directed to continue spraying till the complete elimination of swarms. He also directed to continue daily surveillance and complete planning should be made in collaboration with federal government to avoid future locust attacks.

The chief minister said that institutional mechanism should be devised to deal with the climate change effects in sowing of crops adding that steps should be made for improving capacity of agri. research institutions. The meeting was told that six camps have been set up in Rahim Yar Khan and Bahawalpur along with 16 surveillance teams for anti-locust operations. Provincial ministers Raja Basharat, Nauman Langrial, Chief Secretary, Chairman P&D, provincial secretaries, chairman taskforce for fertilizers and others attended the meeting.

Further delay in release of number plates will not be tolerated: Chief Minister Usman Buzdar has said that further delay in release of vehicles’ number plates will not be tolerated. While presiding over a meeting at his office, he said that instead of lip-service, performance has to be given now and further time should not be wasted in departmental activities. Immediate steps should be taken in accordance with the law and early release of number plates should be ensured, he said. He directed that Excise & Taxation Department should work with more speed keeping in view the difficulties of the people.

The chief minister disclosed that he would pay a surprise visit to excise office in Farid Kot House some day and district excise offices will also be visited without any prior information. He said that DVRS system should be activated and the best enforcement and collection mechanism of property tax should be devised to facilitate the people. The meeting also reviewed implementation of e-toll tax system. Excise minister Hafiz Mumtaz Ahmed, secretary excise and others attended the meeting.

Allama Iqbal awakened the Muslims from deep slumber with his poetry and political wisdom. This was stated by Chief Minister Usman Buzdar in a message issued here on Friday on the eve of birth anniversary of Allama Iqbal. He said that Allama Iqbal was a promoter of Muslim unity and his poetry guides us even today.

Allama Iqbal’s proposal of a separate homeland for the Muslims of subcontinent was a reflective of his farsightedness and political acumen as Quaid-e-Azam Muhammad Ali Jinnah materialized this dream in a period of 17 years. Pakistan will emerge as a true welfare state by following the principles of Allama Iqbal, he added.

Buzdar condoled the loss of lives in road accident near Khanewal and extended sympathies to the bereaved heirs. He has sought a report from the administration and directed them to provide best healthcare facilities to the injured.

In a statement, the minister said that Pakistan Tehreek-e-Insaf (PTI) government has always tried to resolve political differences through negotiations.

Earlier, CM Usman Buzdar said that JUI-F was ‘whining’ in guise of Azadi March in federal capital as a group of corrupt people has once again gathered to fulfil their personal interests.

Those doing politics of chaos will remain unsuccessful like they were in the past, he added.

The minister said negative politics pushes the country behind instead of taking it forward. Pakistan is being ridiculed worldwide due to the non-democratic conduct of the opposition, he said.