Pakistan down Bangladesh to win 50-over series 2-0 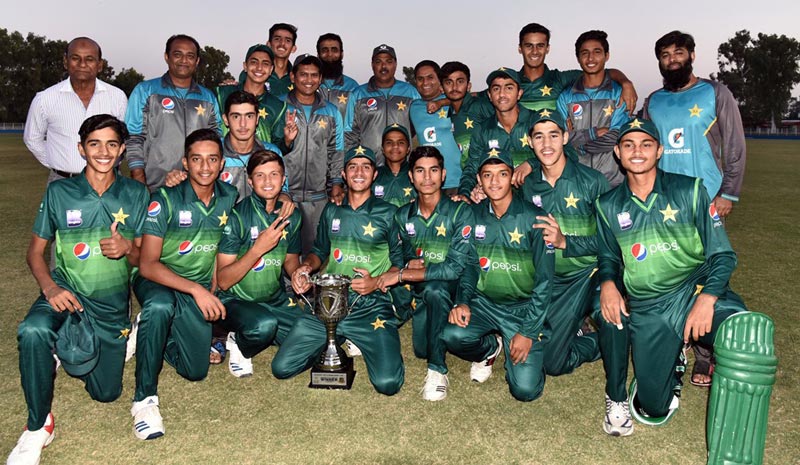 Pakistan Under-16 defeated Bangladesh Under-16 by seven runs on DLS method in the third 50-over match to win three match 50-over series 2-0 at the KRL Stadium in Rawalpindi on Friday. The second 50-over match of the series was abandoned due to rain, while Pakistan won the first 50-over match by 99 runs at the same venue. Bangladesh after opting to bat first were dismissed for 165 in 30.3 overs. The match had a delayed start due to wet outfield and was restricted to 31 overs a side. Nayeem Ahmed, the visiting team captain top-scored with 45 off 52 balls, he hit four fours. Arafat Islam (22), Minhajul Hasan (21), Radowan Hossan (22) and Tawhidul Islam (24) were the only batsmen that went into the double figures. For Pakistan, left arm spinner Ali Asfand continued to shine with the ball as he took three wickets for 38 runs. Ahmad Khan, Ismail Khan and Mohammad Shehzad took two wickets apiece.

In return, chasing 166 to win the match, the openers provided a solid start to the innings. Ali Hasan (24) was the first wicket to fall on 61, leg-spinner Shamsul Islam dismissed him. Mohammad Shehzad (32) was the next to go, he fell on the same score. His innings included three fours and two sixes. Later, Rizwan Mehmood and Ibrar Afzal provided a valuable 62-run partnership for the fourth wicket. Rizwan scored 34 off 38 balls, he hit four fours. Ibrar remained unbeaten on 34 off 37 balls laced with three fours. The match was stopped due to bad light in the 28th over when the home team had posted 148 runs for the loss of six wickets. The match didn’t resume afterwards and Pakistan were declared winners by seven runs on DLS method as they were seven runs ahead of the DLS target at the time of the interruption. For Bangladesh, Amir Hossain and Shamsul Islam took two wickets apiece for 24 and 25 runs, respectively.