US concerned at Cambodia crackdown as neighbours’ cooperation decried 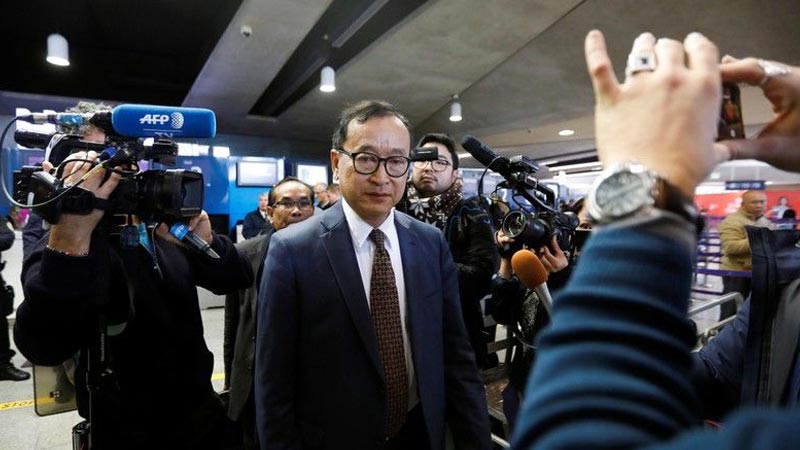 The United States on Friday expressed concern over Cambodia’s crackdown on opposition to authoritarian leader Hun Sen, which has seen dozens of activists arrested and opposition leaders abroad preventing from returning.

Self-exiled opposition party founder Sam Rainsy, who had vowed to return to Cambodia on Saturday to lead demonstrations against one-party rule, said he had been prevented on Thursday from checking-in for a flight from Paris to Bangkok.

A day earlier, Malaysia detained his banned opposition party’s U.S.-based vice president, Mu Sochua, at an airport before releasing her 24 hours later along with two other Cambodian opposition leaders who had been detained earlier as they tried to board a flight to Thailand.

At least 48 opposition activists in Cambodia have been arrested this year since Sam Rainsy announced plans to return on Nov. 9 – Cambodia’s independence day – to rally opposition to Prime Minister against Hun Sen.

The United States was “deeply concerned by the recent expanding series of arrests, harassment, and intimidation of members of the Cambodian political opposition and by efforts to thwart the return to Cambodia of citizens seeking peaceful participation in the political process”, a US embassy spokeswoman said on Friday

“These actions represent an escalation in suppression of the political opposition,” she added.

Hun Sen, who has ruled Cambodia for more than three decades, has described the planned return of opposition leaders abroad as a bid to stage a coup d’etat. The banned Cambodian National Rescue Party’s leader at home, Kem Sokha, remains under house arrest after being charged with treason in 2017.

Joanne Mariner, Amnesty International’s research director for Southeast Asia, questioned the action by countries in the region to block opposition leaders and activists from travelling home. “Cambodia’s neighbours should not bow to Hun Sen’s pressures,” she said.

“Malaysia was right to release Mu Sochua and her two compatriots. But they should never have been detained in the first place.”