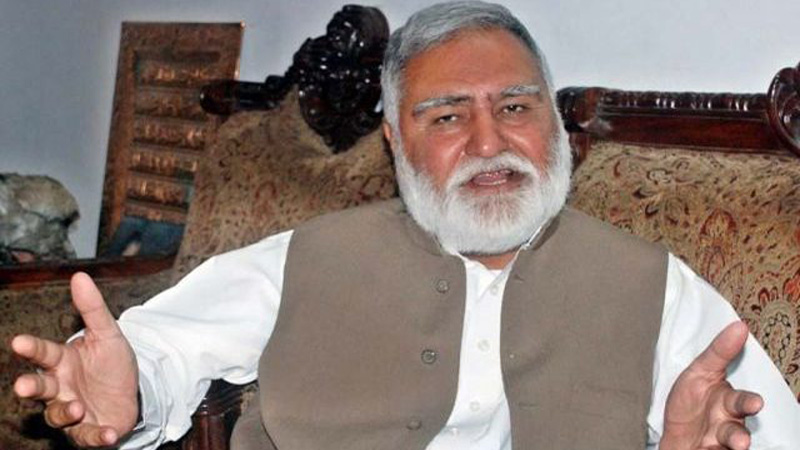 The opposition parties on Thursday announced that the Azadi March will take a new direction in two days.

“Azadi March will assume a new direction in next 48 hours,” said JUI-F leader Akram Khan Durrani while addressing a news conference after a meeting of the opposition’s Rehbar Committee. He said new moves will emerge in the protest based on recommendations given during the meeting. He also revealed that fresh caravans of protesters are travelling to the federal capital from parts of Khyber Pakhtunkhwa.

He said the Rehbar Committee has decided during the meeting that the pressure on the government will be increased through the Azadi March. He did not reveal what steps they plan on taking to put added pressure on the government, but said several recommendations are under consideration. He said the measures will be taken in the next few days and will be announced at an ‘appropriate time’.

Meanwhile, addressing the participants of the march, JUI-F chief Maulana Fazlur Rehman said the opposition leaders do not want an NRO from prime Minister Imran Khan, instead they will not give it to him. He said the prime minister himself hid the money laundering by his sister through an amnesty scheme and now he speaks of granting NRO concessions.

Fazl told the government not to ‘bother with negotiations’ if the prime minister’s resignation is off the table. “There is no need for negotiations then. No need to come to us. When you come, you must come with the intention of leaving the corridors of power behind,” he said in his address. “You are at a dead end now and now you must decide whether you want to continue to remain there or come out and give back the people their right,” he went on to say.

The JUI-F chief welcomed DG ISPR Major General Asif Ghafoor’s recent statement that Pakistan Army is an impartial institution and it wants to remain so. “I want to say this to the state institutions that consider them [JUI-F workers] your own people and they will always be with you,” he said.

He said the Azadi March has removed some of the misconceptions the society had about the religious segment. “Our workers have displayed discipline and respected the rule of law throughout the rally – something acknowledged by the western media as well,” the JUI-F leader said. He repeated his earlier allegations that the 2018 general elections were rigged in favour of the ruling party, saying that rigging was known to all and there was no need to form a commission to establish the same.

While talking about the detailed planning and efforts involved to pull off a campaign of this magnitude, he said the movement had begun the very day after the July 25, 2018 elections. “We have worked constantly since July 26. In nine months we pulled off 15 ‘million marches’,” he said, adding that every political party has ‘actively pursued this’ in their own way. “If the prime minister had shown some competence and had put the economy on the path of improvement, people would have said: ‘Well, even if he is illegally installed, he has taken the country towards progress, the youth are gaining employment, investments are taking off.’ But the country continues to sink. If we continue to give them time, every single day will cost us,” he opined.

The JUI-F chief said the opposition leaders will never be willing to squander the emotions of the participants and end the ongoing anti-government protest. He said the participants who belong to all walks of life and represent all political parties are determined in their resolve and ‘there is no telling until when they wish to continue’.

While addressing the anti-government protest participants, Pakhtunkhwa Milli Awami Party Chairman Mehmood Khan Achakzai vowed that any attack on the constitution will not be allowed. “What binds us together is the Constitution and when you tamper with it, you attack the very foundations of Pakistan. We will not allow such an attack by any general, colonel, judge, mullah or pir,” he declared.