Toxic smog recedes in Lahore after rain and strong winds 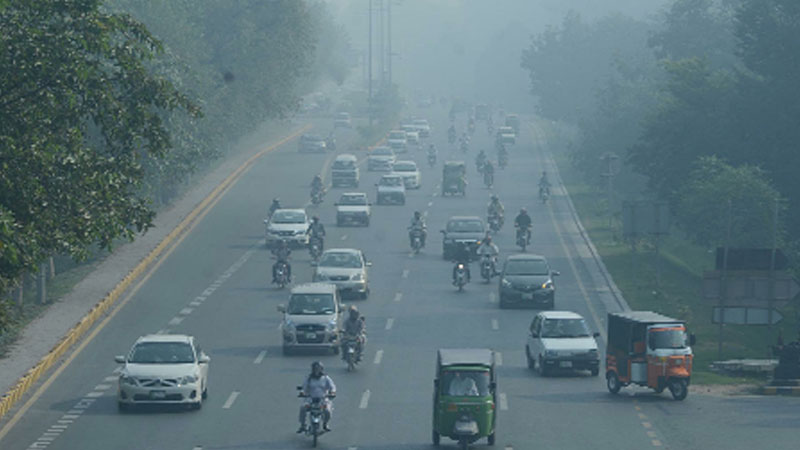 The threat of toxic smog receded temporarily in Lahore on Thursday due to overnight rain in certain areas.

According to the Met Department sources, the current spell of rain is expected to continue until Friday with wind direction to change within the next 24 hours.

Currently, strong winds coupled with rain, from east and southeast direction, have blown away pollutants from the provincial capital. However, this is only a temporary relief for the citizens as the fifth season of toxic smog will continue to engulf horizon from November till February.

On Thursday, widespread rain/thunderstorm (with heavy falls at a few places) is expected in districts of upper Punjab, Kashmir, Gilgit-Baltistan and Islamabad, at scattered places in districts of Khyber Pakhtunkhwa and central Punjab.

Snowfall over high mountains and hailstorm in plain areas are also expected during the period.

Concerns around poor air quality are mounting for the last four years as the smog has deprived the people of sunshine and dusk-hour charm, and unfolded severe health risks with respiratory diseases, particularly for the children and the elderly.

Officials and several politicians have claimed that stubble burning in Indian Punjab, and the sudden change of direction of wind last night was responsible for thick layers of smog in Lahore.

At the weekend, New Delhi experienced its worst air quality day since 2016 with an AQI of 494, in the “severe” category – 500 is the maximum score and anything above 400 is considered hazardous to health.

It may be mentioned here that a thick blanket of toxic black smog engulfed the entire metropolitan of Lahore around 9pm Wednesday night, forcing many residents to either literally gasp for breath or complain about sore throats and watery eyes.

An AQI is used by government agencies to communicate to the public how polluted the air currently is or how polluted it is forecast to become in near future.

Air pollution is expected to cause around seven million premature deaths globally this year and have a major economic impact, according to a report, but Environment protection agencies in Pakistan have visibly not done enough to counter this threat.

On November 5, 2019, an eminent British newspaper The Telegraph had written that the highest AQI reading anywhere in London was currently 65.

The reputed media outlet had added: “The recommended World Health Organisation safe daily maximum is 25, and anything above 300 is considered “hazardous.”

About New Delhi, it had viewed: “Every winter, the megacity of 20 million people is blanketed by car fumes, industrial emissions and smoke from stubble burning at farms in neighbouring states.”

Interestingly, this media house had published the list of world’s 20 most polluted cities with their current AQI status and Lahore was 19th on the list less than 24 hours ago, although according to rankings released by the World AQI, Lahore was ranked the second most polluted city on October 29.

Indian capital New Delhi ranked first with an average concentration of fine particulate matter at 373 AQI, followed by Lahore at 188 AQI in cubic metre of air. Earlier, the Punjab provincial capital was briefly ranked first in the list of most polluted cities.

Karachi, on the other hand, was ranked seventh with an average of 153 AQI.

Air pollution is expected to cause over seven million premature deaths around the world this year and have a major impact on the global economy in the future.

Lahore’s air pollution is caused largely by vehicle and industrial emissions, smoke of burning garbage and crop residue and dust from construction sites.

The Telegraph had added, “The World Health Organisation (WHO) tracks air quality at more than 1,600 locations in nearly 100 countries – but all are urban areas. So while Pakistan, Egypt and Mongolia are among the most polluted countries according to the 2018 World Air Quality Report, this only refers to pollution in cities.

“Air quality in the Karakoram mountain range or the Gobi Desert will, of course, be pristine. Bangladesh’s urban areas are, on average, the world’s most polluted, followed by Pakistan and India. Europe’s most polluted cities are found in Bosnia and Herzegovina, North Macedonia and Kosovo.”

In this regard, the teams distributed face masks among motorcyclists, motorists and pedestrians on important roads of the city.